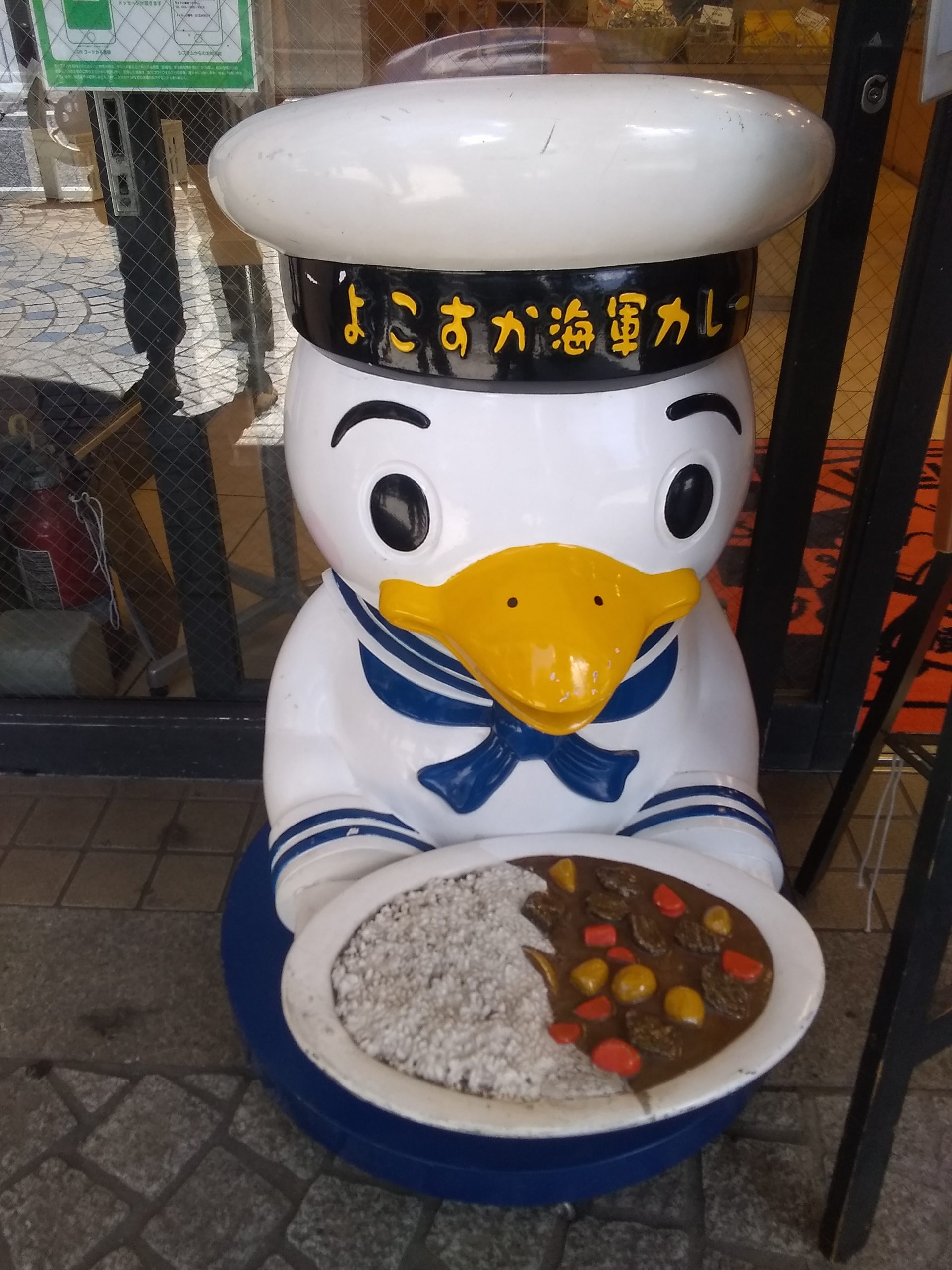 Journey to Yokosuka for a sublime taste of iconic Navy Sailor food. Kaigun curry and the Navy burger are two delicious classics with a fascinating backstory.

But though I live here, it was a surprise to learn how Yokosuka came to be associated with Kaigun Curry and Navy burgers.

I was on a local train when I first saw advertisements for these dishes. Initially, I was baffled. A burger…really?

It took a bit of research to understand how this could become a dish worth traveling for.

Yokosuka has a long history as a Sailor town and was originally home to the Japanese Imperial Navy. Today, it includes the Kaijo Jietai (proper way to refer to the Japan Maritime Self-Defense Force) and U.S. Navy.

So, what is the significance of Kaigun (Japanese Navy) Curry and burger, and what makes them worth traveling for?

In a nutshell, they are authentic and delicious SAILOR FOOD.

What do Sailors eat at sea? While it is much easier to get fresh products at sea today, securing supplies to feed a hungry crew for long periods at sea was far more difficult in the old days of sailing.

To attract recruits, Japanese enlistees were promised a vast quantity of white rice, a luxury for the rich. However, the rice on its own lacked the nutrients the Sailors required.

Western Sailors died due to scurvy brought about by vitamin C deficiency. Out in the east, many Japanese Sailors died due to B1 deficiency (beriberi) as a result of a lack of thiamine. Thiamine helps with digestion, a healthy metabolism, and the nervous system. Without this vitamin, Sailors could expect to exhibit symptoms such as mental confusion, loss of muscle function, and paralysis.

During the Meiji era (1868-1912), the Japanese took note of the food other navies were serving Sailors. The British consumed curry, which they, in turn had adapted from the Indians.

It was Kanehiro Takaki, a Japanese naval medical officer, who conducted scientific experiments and realized that the problems Sailors were suffering were diet-related. Takaki proposed the Imperial Navy provide meals richer in protein to prevent and treat beriberi, a proposal that was adopted in 1884. The following year, he was appointed Navy Surgeon General.

The curry that the Japanese adapted from the British used meat, a protein rich with thiamine. Kaigun Curry soon became a popular dish amongst Japanese Sailors. Later, these Sailors brought this new dish ashore, where its popularity spread. In 1908 the recipe for Kaigun Curry appeared in official cookbook Kaigun Kappōjutsu Sankōsho (Navy Culinary Arts Reference Book).

Japanese curry differs from Indian curry primarily in that it tends to be thicker, more gravy-like, and sweeter, with fewer spices. Instead of bread, the curry is meant to accompany rice.

Today, each Kaijo Jietai ship and submarine has their own special take on the curry recipe, which is traditionally eaten every Friday.

Because of its historical ties and current relationship with Sailors, Yokosuka was designated a special “Curry Town” in 1999.

In a sweet nod to Kaigun Curry’s heritage as a Sailor dish, restaurants in Yokosuka often serve a set menu that includes salad and a glass of milk.

Hey, you want to ensure your Sailor gets their nutrients and vitamins!

Similar to Kaigun Curry, the hamburger has a fascinating backstory with the Navy. Just as the Kaijo Jietai eat Kaigun Curry every Friday, Sailors aboard U.S. Navy ships and submarines have the option to eat burgers every Wednesday, a.k.a. ”hump day”. (Note: there are also vegetarian options to choose from.)

Ashore, at a time when dining options are so plentiful, the significance of the burger can be baffling. But aboard a warship, Sailors don’t have the same range of choices: you can’t simply conjure up a burger any time you want one.

Thus, a familiar food becomes a comfort dish, a reminder of home, and a luxury. Equally as important, Burger Day is a way for Sailors to accurately mark the passing of time during long underway periods.

“How many days until we pull into port?”

“Two burgers and a wake-up.”

I am surprised there are not more clocks, watches, and calendars with Navy burger motifs; the Navy burger is that legendary.

It was after World War II that the burger achieved fame in Japan.

Post World War II, American Sailors stationed in Japan missed the familiarity of the burger. Many Japanese restaurants cleverly identified a way to address homesick cravings, and learned how to construct American ”Navy burgers”. Thus, what had been built for American clientele eventually became a curious and fashionable food for the Japanese.

Yokosuka is not the only city in Japan to celebrate the ”Navy burger” as a culinary tourist draw. Sasebo, also a major host to the Kaijo Jietai and U.S. Navy, is home to the Sasebo burger.

One of the great joys of travel is the chance to try different foods. I am firmly convinced there is a great deal to learn by observing not only what a population eats, but how they eat.

I chalk this up to curiosity and novelty.

How can one explain the success of a messy fast food, take-away item eaten in ONE’S HANDS (gasp!) in a country where so much thought and time goes into preparation?

The Japanese had observed their British counterparts, the British Sailors had observed the Indian diet. Each country drew inspiration from an idea and then made it their own.

In case you’re wondering…these are indeed dishes worth traveling for.