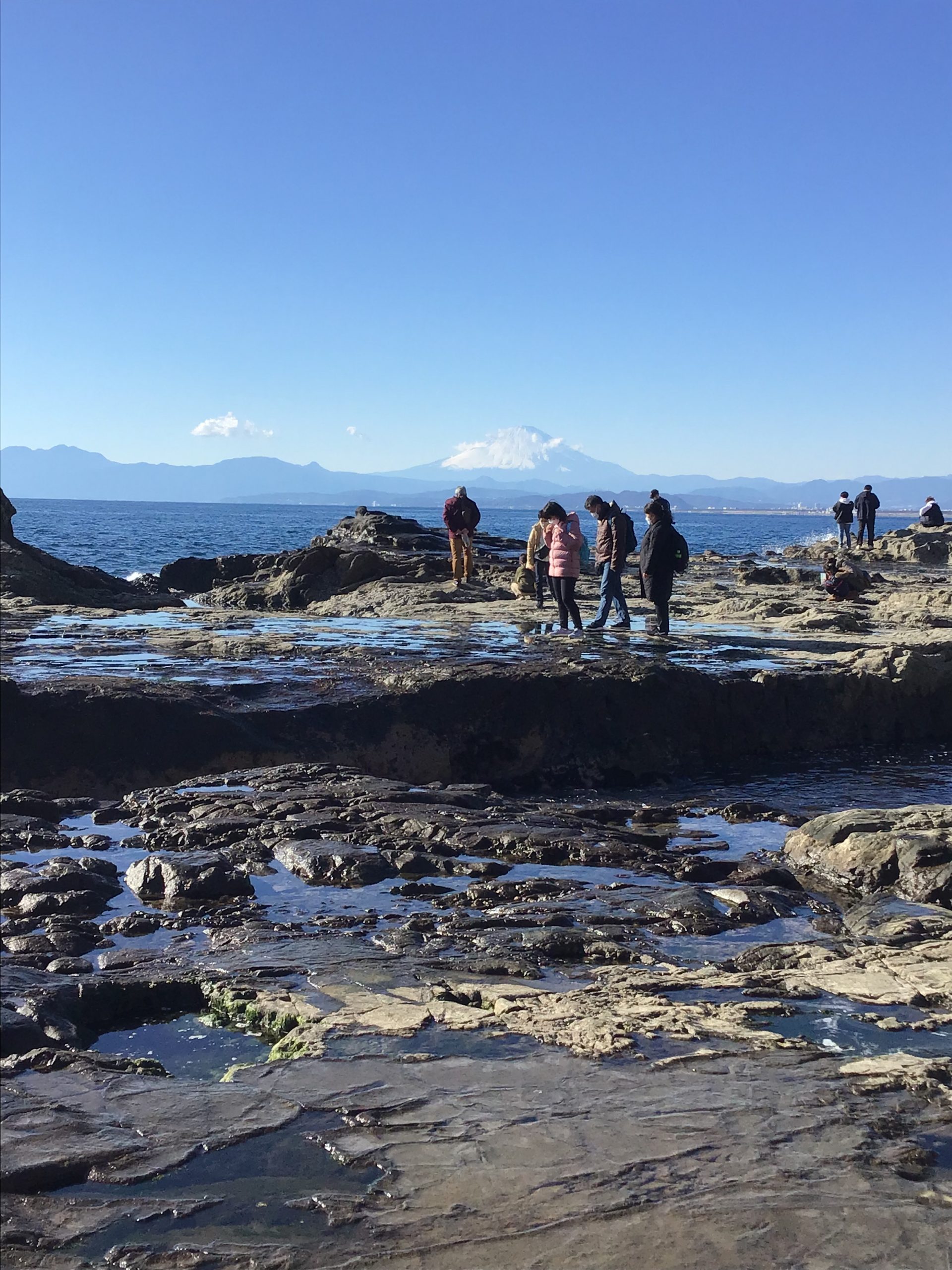 This year, visiting family and I decided to celebrate New Year’s Day in Japan like the Japanese. A New Year + shrines + Mt. Fuji + the dragon of Enoshima?

It’s a GREAT way to usher in the new year!

Preparing For the New Year

No matter – we had fun observing other Japanese-specific traditions.

The Japanese have many special ways they prepare for the new year. For starters, a Japanese colleague shared that whereas Americans have “big cleaning” in the Spring, the Japanese do their oosouji (deep cleaning) at the end of the year. In the days leading up to the new year, I cleaned the apartment. (Or at least, the apartment was cleaner than it is the other 11 months of the year.)

I also hung a shimekazari (straw decoration) on the apartment door to keep bad spirits out, and to invite the good gods in. A thoughtful Japanese colleague had gifted me a lovely shimekazari the year earlier. Although it’s tradition to take them to a temple mid-January to be burnt, I could not bear the thought of burning a gift and so recycled it.

I then humbly pleaded with another Japanese co-worker to help me order osechi ryori (traditional food for the new year) at the local department store, which she graciously did.

My parents and two visiting younger brothers were up at 5 a.m. and out the door shortly thereafter for another tradition.

We walked 20 minutes to my favorite neighborhood shrine to perform hatsumode. During hatsumode, one makes their first prayers at a shrine or temple to express gratitude for the previous year, and their hopes for the year ahead.

Although it was cold and dark outside, the shrine was festively decorated with rows of paper lanterns strung along the path. We bowed outside the Torii Gates, deposited our coins, said our prayers, and rang the bell.

Call me cheesy, but despite the fact that none of us understand the Shinto religion, there’s something really lovely about offering up silent prayers and thanks as a family.

Hatsuhinode – Observing The First Sunrise of the Year

Last year, I had been baffled when I departed the neighborhood shrine to see several people moving with urgency uphill. I knew local traffic patterns well enough to know it was highly unusual to see so many people heading up this hill, at such an early hour, and with such urgency.

Although I had initially planned to observe hatsuhinode – the first sunrise of the year – from my balcony, with a hot can of coffee, I abruptly changed plans and followed the group up the steep hill out of pure curiosity. I was short of breath and wiping sweat from my forehead by the time we reached the top of Tsukayama, one of my favorite parks.

This year, my family and I once again navigated in the dark from the shrine up steep steps, through a bamboo forest, past the barren cherry trees, and up to the top of Tsukayama. One of my favorite things about this hill is that when conditions are perfect – as it was that early morning – Mt. Fuji is faintly visible in shades of gray and pale pink.

As it was the previous year, a good-sized group had gathered at the top, cell phones in hand, ready to record the first sunrise. The atmosphere was one of happy anticipation. It took a few extra minutes for the sun to break through cloud cover on the horizon. While waiting, Mom thoughtfully inquired on the etiquette for hatsuhinode.

Note: my parents live in Florida, where it’s not uncommon for people who are gathered together to applaud a beautiful sunset. Indeed, when we watched the sunset on a visit to Key West, hundreds of people clapped, cheered, hugged, kissed, and clanked cocktail classes.

Here in Japan, you just watch.

Thanks to my Japanese colleague, we all had osechi ryori for breakfast.

Osechi ryori boxes have a wide variety of “auspicious food” meant to bring luck for the year. It’s a great opportunity to experiment with many different types of Japanese delicacies, which come beautifully presented. They come in a wide range of options based on the number of people and number of samples.

They might not be a traditional American breakfast foods, but they certainly are fun and delicious!

I’m firmly of the mindset that anyone who comes to Yokosuka MUST take a trip to Enoshima, a.k.a. “The Island of the Dragon”.

With such terrific weather, we decided New Year’s Day was a perfect time to go. As it turns out, thousands of others had the same thought.

The island is only 2.5 miles in circumference, and the bridge leading connecting the island to the mainland was packed. Similarly, the main street leading up to the temples was also bustling with tourists eager to perform hashimode at Hetsunomiya, one of the main shrines.

It wouldn’t be Japan if authorities hadn’t anticipated the crowds. Uniformed officials with loudspeakers provided crowd control and released groups in batches. The queues were very orderly, and it’s worth noting that there wasn’t a single push or shove.

Once we cleared the group outside Hetsunomiya shrine, the crowds thinned considerably. We were easily able to explore the Enoshima Iwaya caves (home to the renowned dragon), ring the Love Bell, and kick back against sun-warmed rocks to admire the gorgeous blue waters of Sagami Bay.

If you can’t see Mount Fuji (usually due to cloud cover), the Japanese politely say it’s because the mountain is intimidated by your beauty. On New Year’s Day, we were treated to magnificent views of the iconic mountain. Since the mountain is closely associated with hard work and perfection, we took that as a happy omen for the year to come.

Many people make a New Year’s resolution to pay more attention to their health and improve their physical fitness. Enoshima is a fantastic place to put such a resolution to the test.

Enoshima remains the only place I’ve ever seen where visitors pay to use the island’s escalators. For such a small island, there are a surprising number of stairs. Therefore, anyone who travels there can expect a great cardio workout.

That’s a good thing, because the island has so many great foods to sample.

Yes, you could absolutely spring for a sit-down restaurant, and you’d have a delightful meal. However, the great fun of Enoshima is experimenting with the hundreds of small shops preparing your food fresh, and on the spot.

Okay, once again, I did wimp out when it came to ordering a shirasu gelato….but the year is still young.

It’s always fun to see how another culture celebrates the New Year.

I had celebrated New Year’s Day by myself the year before, since Japan was closed off to foreign tourism. And I had a fantastic holiday in Nagano with the snow monkeys and in Yokosuka watching the sun rise. However, getting to share the experience with my family was an unforgettable gift that I will always be thankful for.

If you’re interested to getting to Enoshima from Yokosuka or Tokyo: take the train to Kamakura train station. From there, take the Enoden line and get off at Enoshima. It’s a short walk from the Enoshima station to the island.

May you and your loved ones have a safe and delightful year ahead! Happy 2023, and many happy adventures to you!

Looking for a hotel in Kamakura? Good for you! There are many safe and affordable places to stay in this gorgeous and historic city. I hope you find the one right for you. 🙂