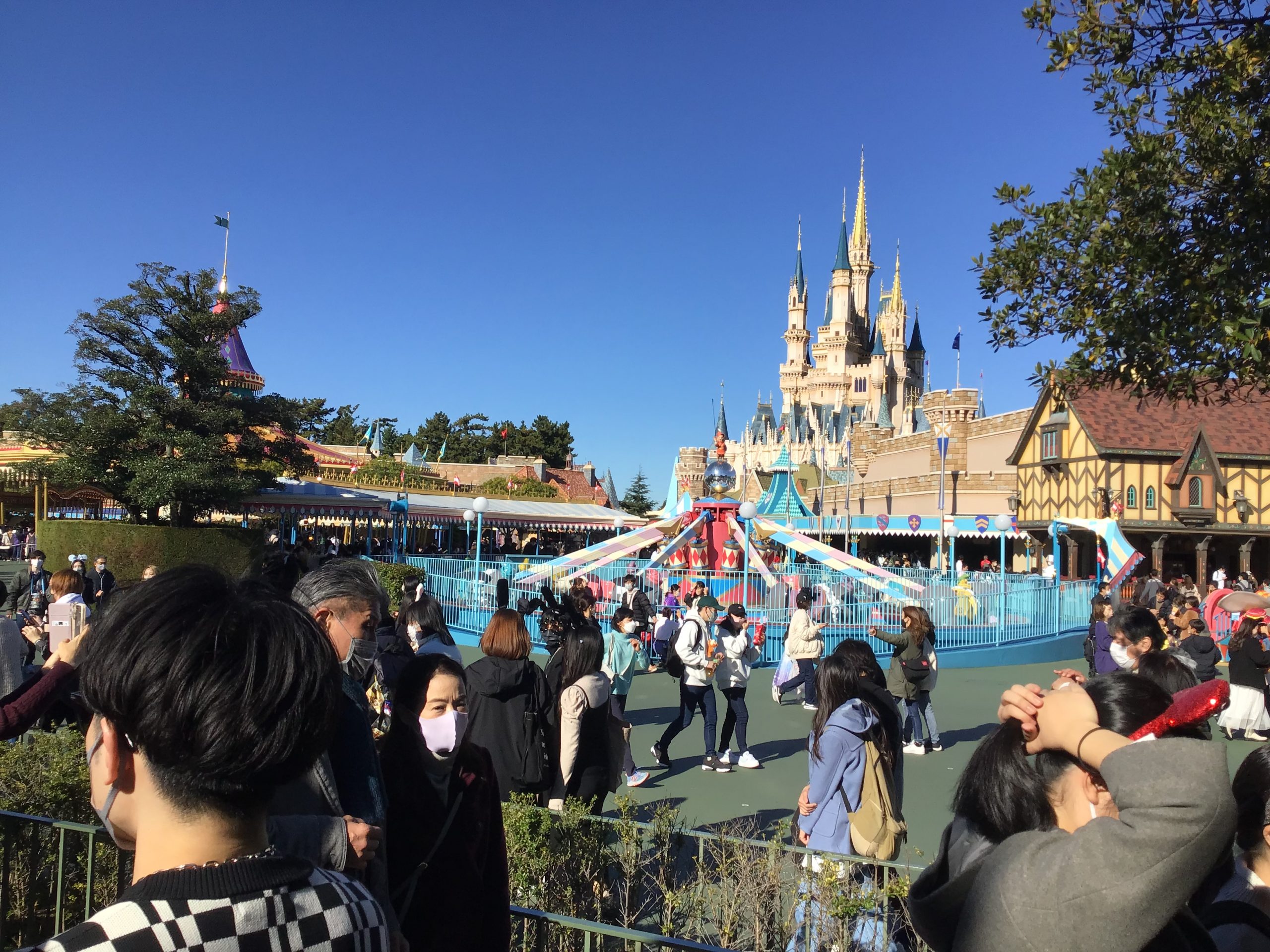 Visiting family and I celebrated Thanksgiving at Tokyo Disneyland. I was beyond thrilled at scoring six tickets at the local 7-Eleven. I was also delighted by how much cheaper it is to get tickets to Disneyland in Tokyo than it would be in the U.S. With a very generous exchange rate, the total cost for six tickets – three adults, three children under eight, a free 2-year old – came to ¥42600 ($283.51). Had I bought tickets for the same date at Disneyland California, the cost would have come to $1044.

It is after all, a sophisticated move to visit a theme park on a day that is a holiday for Americans, but which is a regular work day in the host nation.

As it turns out, my brilliant plan was shared by a sizeable chunk of U.S. Sailors and their families.

Tokyo Disneyland is an hour and a half by local trains from Yokosuka, and cost ¥1280. Maihama Train Station, the closest stop to Tokyo Disneyland, is SO POPULAR that Tokyo Station has a thick, solid red line on the floor to guide commuters in the correct direction. Three moving walkways and multiple escalators later we arrived at Maihama station to the happy sound of Disney music. Usually, train compartments in Japan are whisper quiet. With the palpable excitement of a group in which 90 percent of passengers were headed to Tokyo Disneyland, the compartments were anything but.

After raining heavily the day before, Thanksgiving day itself was gorgeous. The weather was so clear that from a distance we were treated to stunning views of a snow-capped Mount Fuji.

Observations on the Uniqueness of Thanksgiving at Tokyo Disneyland

Christmas decorations were up on Thanksgiving day, with gorgeous holiday-themed decorations throughout the theme park. An enormous, picture-perfect Christmas tree greeted guests near the entrance.

Granted, the very young ages of my fellow family members meant we were attracted to a very particular set of rides. The app was highly accurate in predicting the wait times. Hands down, the hardest ride to get on is Beauty and the Beast – the app consistently showed a wait of 180 minutes. Still, the Tokyo Disneyland wait times were fabulous. We were especially glad that we front-loaded going to Haunted Mansion early in the morning; had we waited to the afternoon it would have been impossible.

We saw three parades: Dreaming Up!, Christmas Stories, and (at night) Electric Dreamlights. Since I’m someone who LOVES parades, these parades were really special. One thing I observed the Japanese do that I wish I’d thought of is that they packed cheap plastic picnic-style blankets to sit on. They simply plop the blankets down along the road, and voila! They had prime viewing spots.

Tokyo Disneyland had a generous policy when it came to allowing off-park food inside. Although our bags were searched, no one batted an eye at the tangerines and light snacks they found. Inside the parks, I was surprised by how reasonably the food was priced…more expensive than you would pay outside the park, but not glaringly so.

Food I wanted to try and didn’t: A TURKEY LEG! It was Thanksgiving after all. The turkey legs are very reasonably priced at ¥900 ($6.69). Much to my amusement, the line for turkey legs rivaled the lines for rides, and were in high demand by THE JAPANESE. I find that delightful and hilarious, because the turkey is a bird that is largely unfamiliar in Japan. For starters, it won’t fit into Japanese ovens. Another fun fact: the name for the turkey in Japan is: shichimencho. Loosely translated, it means “the bird with seven faces”.

The Japanese tend to be very adventurous when it comes to trying new food, and perhaps they found the novelty of an exotic turkey leg irresistible. 🙂

Tokyo Disneyland deserves credit for choosing incredible cast members. They genuinely seemed happy to be working there, and went out of their way to greet guests as they embarked rides. Furthermore, they lock eyes and thank guests for coming as they disembark. As a former amusement park rides operator myself, I admire how much good cast members contribute to a great experience. The Tokyo Disneyland team set a gold standard of perfection.

It’s expected that if you go to ANY of the Disney parks, you’ll be spending quite a bit of time in line. The Japanese, toddlers included, are masters of the queue. There is no cutting, cursing, shoving, etc. They are simultaneously very well-dressed and unashamed to rock Disney attire. It’s not at all uncommon to see adults wearing slacks and collared shirts while sporting a headpiece or holding a plush character.

The end result is a very wholesome, orderly, clean-cut experience.

7. COVID Still Having an Impact

There is no mask mandate at any U.S. Disney park. The rules are different at Tokyo Disneyland. One of the conditions I had sign when I purchased tickets was acknowledgment that we’d be required to wear masks inside the park. Of course, the policy is relaxed when eating. Furthermore, provided that you are in an uncrowded area, no one says anything if you remove a mask for a few seconds for a quick photo.

Expect to see sanitation bottles at the entrance and exit of every ride.

Although you are in Japan, you’ll see English alongside Japanese characters on almost every sign and menu. I was also surprised to hear pre-recorded safety announcements in English. While I did my best to speak Japanese, I gathered that a good portion of cast members have at least a rudimentary understanding of English.

I feel truly fortunate that I got to celebrate a meaningful holiday with people I love.

There are some things I’d do differently. As a Sailor stationed in Yokosuka, Tokyo is so close that it seemed wasteful to spend money on lodging when I had a perfectly good apartment. However, after talking with co-workers, they repeatedly advised that we book lodging near Tokyo Disneyland. I caved, and booked a room nearby for after the trip. Thank God!!!

In retrospect, it was downright stupid to depart Yokosuka at 5:30 a.m. in order to be there before the park opened. The morning commute in Tokyo is NO JOKE, and it is especially nerve-racking to navigate three fully packed trains and bustling stations with young children. If given a do-over, I would have booked TWO NIGHTS at a place closer to Disneyland: one night pre-Disney, one night post-Disney.

If you are looking for a place to stay affordably near Tokyo Disneyland, there are many options.

Although I did cast several longing glances at Tokyo Disneyland Hotel, located directly in front of the entrance, I think the 2-bedroom apartment rental we booked was a smart move. The neighborhood was clean, safe, and very quiet, and the rooms had everything we needed. It was less than a five minute wait for a taxi, and the 10 minute taxi ride cost ¥2000 ($14.86) – a bargain.

Here’s wishing you a safe and delightful adventure!

One thought on “Celebrating Thanksgiving at Tokyo Disneyland”