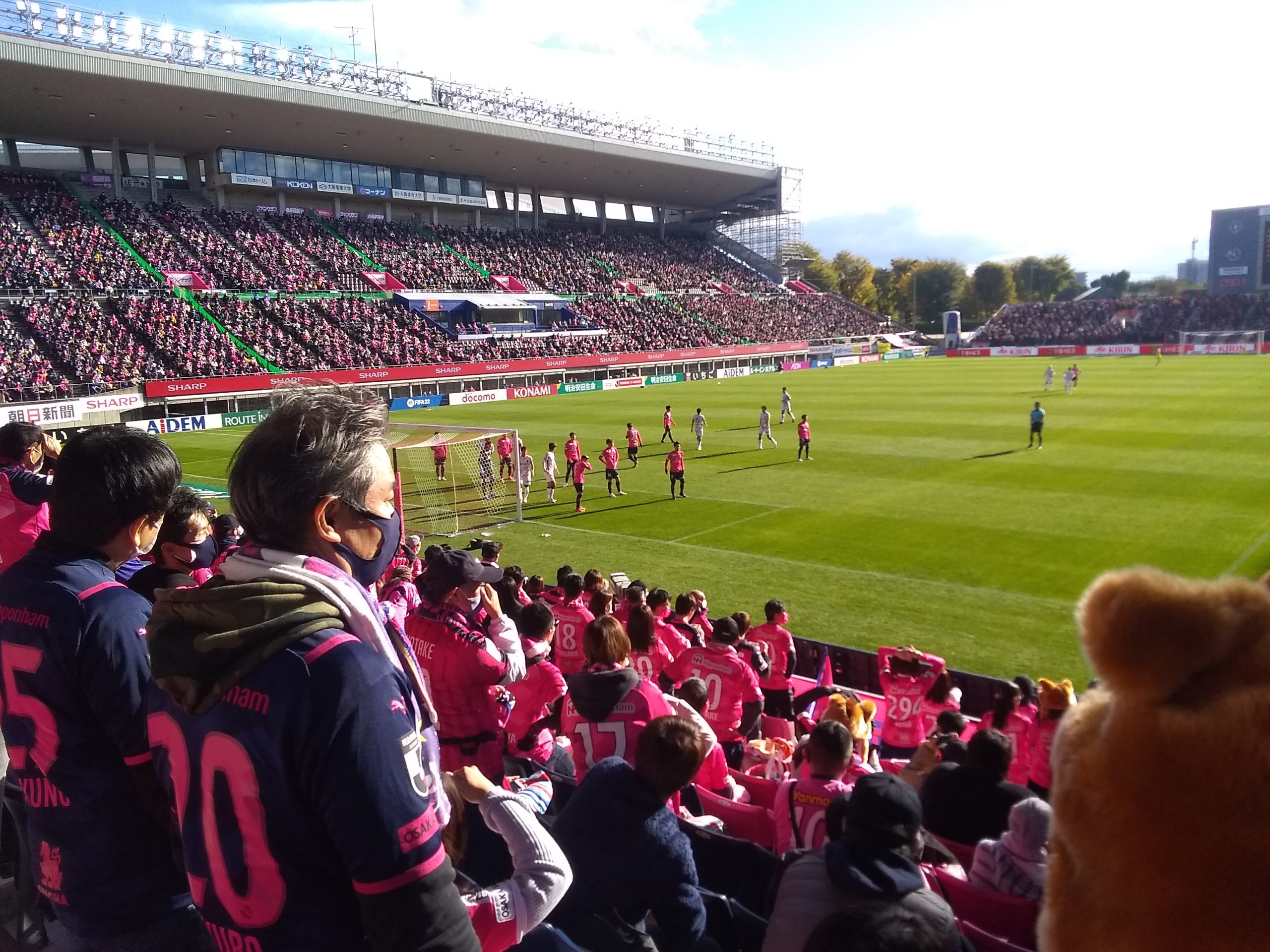 It was by accidental online search that I found my last name (Cerezo) was shared with Cerezo Osaka; a professional team competing in Japan’s Tier 1 Football league.

Generally, I have found it works best for foreigners to support the local team. Based on the fact I lived in Yokosuka, I should have been an ardent fan of Yokohama’s F. Marinos (Yokosuka’s nearest professional sports team).

“Marinos” is Spanish for “Sailor”. As a Sailor, I definitely approve.

It’s just that my name is Cerezo. Ergo, I traveled to Osaka to see Cerezo Osaka battle the Nagoya Grampus. (If you’re curious what a ”Grampus” is, it’s a species of dolphin.)

It’s important to note that when I saw the Cerezo Osaka play the Nagoya Grampus, COVID precautions were at a high. Japan was still in a public health state of emergency, and very few foreign tourists were allowed into the country.

That I was able to travel was because I fell under a special category.

Osaka, a major financial hub, is so large it hosts two soccer teams: Cerezo Osaka and Gamba Osaka. As is often the case when a city has more than one team, it was this rivalry that was bitterest.

The decision to name the team Cerezo Osaka came in 1993 after public vote. Why choose a Spanish name?

Coming off the local train, I had Google Maps all set to vector me to the stadium. As it turns out, it was unnecessary.

I spied a father and two young sons, dressed in Cerezo jerseys and moving with urgency, and chased after them.

Outside the stadium, I posed by a statue of Lobby, the team’s official mascot. What’s interesting about Lobby is that he often accompanied on the football field by his mother, Madame Lobbina. I have never seen a sports mascot that features a mother-son combo, and the relationship is adorable.

I had my passport and vaccination card ready to present along with my ticket. A member of the staff took my temperature, and after ensuring my hands were sanitized led me to the seating section.

En route, I passed many banners and flags expressing their love for Cerezo.

Under this banner, screaming for the triumph of the cherry.

Despite the bewildering, heady pleasure I felt from the tidal wave of Cerezo love, I was keenly conscious of eyes following me, scrutinizing. I had never felt as much a foreigner as at that moment.

I was tall and clearly not Japanese. Were they worried about me spreading COVID?

Had I accidentally spilled something?

As I looked down at my gray shirt, and then out at a solid wall of flaming pink, I suddenly understood.

They were staring because I did not LOOK LIKE A FAN.

“Sumimasen. T-shatsu wa doko desuka.” Excuse me, where are the t-shirts?

He pointed in the correct direction and I located the official Cerezo merchandise store.

I purchased several items and changed on the spot, throwing a flamboyant Cerezo pink shirt over my gray one. Now looking the part, I returned to my section. This time, I belonged. Then I saw that two fans in front of me were dressed from Lobby wolf-covered head on down in official fan merchandise, and clutching a Lobby doll.

Even with my merchandise, I – a bona fide, authentic Cerezo – was being out-Cerezo’d. Oh, the irony.

The players came onto the field for introductions, and I blinked in surprise. The Nagoya Grampus goal keeper had to be one of a handful of other foreigners in the stadium.

As he made his way to the goal post one of the girls turned to the other.

Regardless of whether you are a passionate football/soccer fan, I highly recommend seeing a professional match in Japan. It’s more than just a game – Japanese sportsmanship is truly something else.

The stadium is super clean. Japanese made international news during a World Cup in which Samurai Blue fans stayed after defeating Columbia to clean their section. Two weeks later, following a loss to Belgium, Japanese fans made headlines when they again stayed behind to clean.

Such exemplary manners didn’t just come from the fans. The Samurai Blue not only cleaned their locker room, they left behind a ‘thank you’ card.

It wasn’t a show for the world stage. Following the Osaka-Nagoya match, I watched as fans of both teams methodically removed all banners themselves, and verified their rows had no waste before they left.

If you are in the home section, don’t expect to sit down. Expect to spend the match on your feet.

The team colors are super bright. Granted, there are outliers when it comes to fashion. But Japanese generally tend to favor conservative colors. Cerezo Osaka’s colors are anything but subtle – “FLAMING PINK” and bright blue. That Cerezo Osaka fans so fully embrace the color schemes says a lot about their passion. A Cerezo Osaka fan is impossible to miss.

Fans use a distinct clapping rhythm to motivate their team. I had been determined to be a perfect fan, and had been watching those on either side of me trying to copy the pattern. I made a mistake with an extra clap, and the women in front of me simultaneously turned around. Oops.

Stadium Music. A Taiko drum takes the place of stadium anthems and pop tunes. As someone who loves, loves, LOVES taiko drums, that beat is everything.

Fan Etiquette. You can best believe fans are super polite. Knowing this, I had not been certain how to celebrate any goals. The Japanese are not physically demonstrative people when it comes to strangers. Therefore, I was utterly unprepared for the roar that erupted when Cerezo Osaka scored.

I joined the home section in jumping up and down. Then, the fan to my left turned and held out his hand. I was so surprised that a Japanese had initiated physical contact that I MISSED the “High-5”. Our fingers barely grazed.

Fortunately, Osaka scored again. This time, I was ready. When the fan held up his hand, our hands collided with such force we both were massaging our palms after.

First of all – If you love a Cerezo, are friends/co-workers with a Cerezo, or indeed ARE a Cerezo, I don’t know how you can come to Japan and NOT see a Cerezo Osaka home game. There’s every chance I will drag you there myself.

The atmosphere is electric. It is a Cerezo love-fest.

Seriously, it’s worth scheduling your vacation around.

Not a Cerezo fan? Okay…I guess. At least consider seeing a Japanese football match. It’s an experience in entertainment, sportsmanship, and pure class.

And regardless of which team you are cheering for, it is utterly unforgettable.