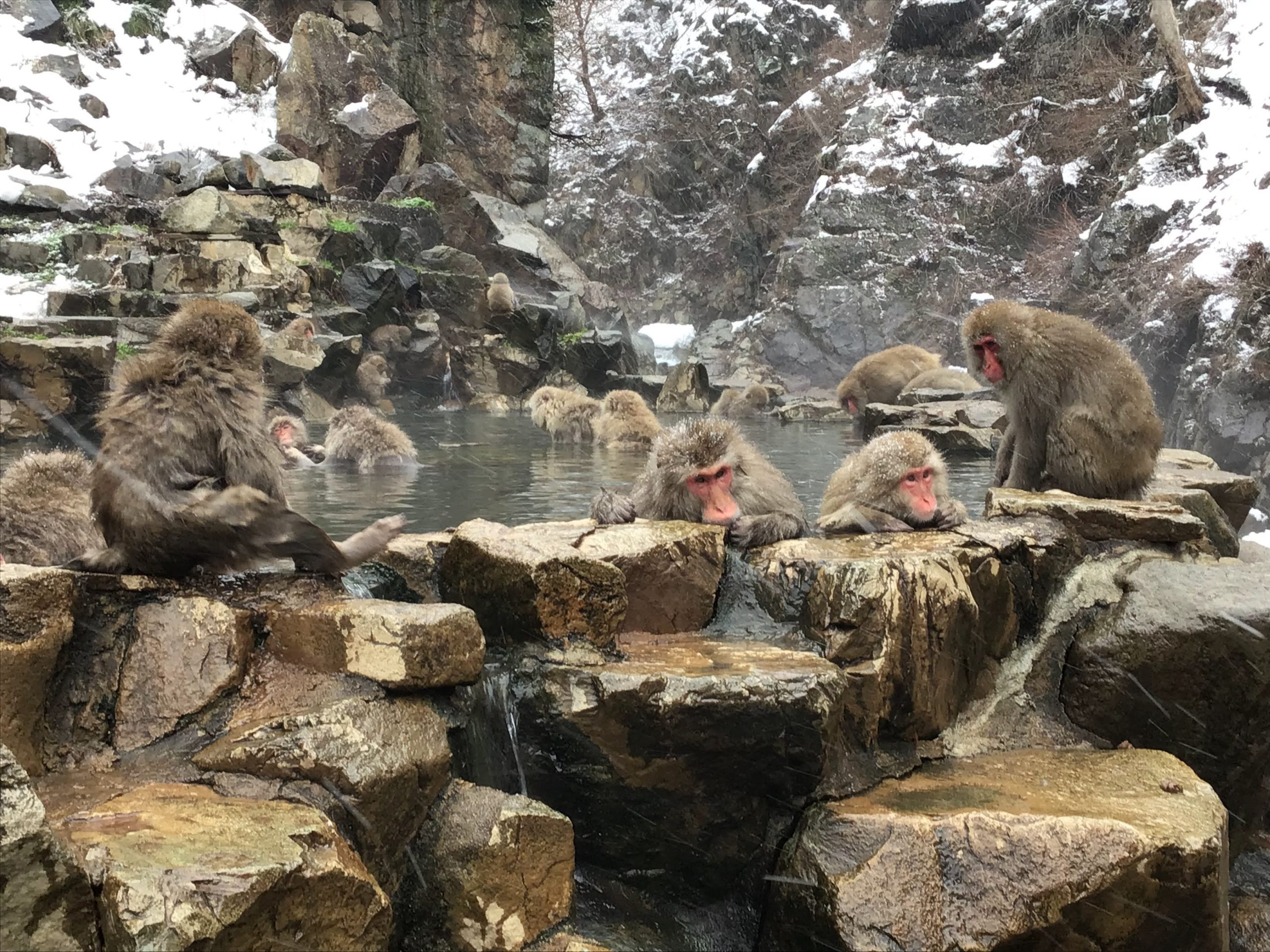 The snow was coming down fast and heavy. As I watched the Jigokudani snow monkeys enter and exit their private outdoor onsen, I felt like a kid on Christmas morning.

If it had been possible to be with my family that Christmas, I would have been there. As I could not go to them, and they could not come to me in Japan, the healthiest way to avoid self pity was to plan something completely unfamiliar.

Monkeys in a tropical climate? That was to be expected. Watching the only monkeys in the world capable of surviving these harsh temperatures frolic in their private onsen as the snow swirled around them?

Now that was magical.

I awoke that Christmas morning and eagerly looked out the window.

Nagano, which had hosted the 1998 Winter Olympics, is renowned for the caliber of its snow. My friends had raved about the skiing and snowboarding. When I had arrived at Nagano Dec. 23, I had been a little disappointed that the snow on the city streets from a few days earlier had melted. However, the pearly gray sky outside suggested that it might snow after all.

It was an atypical Christmas for a Westerner. I spent a wonderful morning, not at a church, but Zenkoji Temple.

En route, I passed a Kentucky Fried Chicken. Through the locked glass doors I could see staff busily making preparations.

Who would have thought Kentucky Fried Chicken was so closely associated with Christmas in Japan?

It might have been because the good Colonel Sanders had a white beard, or because the red and white combo on the KFC logo reminded them of Santa Claus. In any case, Kentucky Fried Chicken was so popular you had to place an order weeks in advance to secure a Christmas bucket.

After visiting Zenkoji temple, I had a street food breakfast consisting of a hot local dumpling, oyaki, with shinshu beef and nozawana, and caught a train to Yudanaka station.

The journey showcased the the land’s agriculture. I was intrigued by the abundance of grapes in the region. It was interesting to see the grape vines were protected from the cold by straw. The way the straw was drapes around the vines made it appear like each plant was wearing a hula skirt.

To my delight, it started to flurry.

By the time the train arrived at Yudanaka station it was snowing heavily. There were no turnstiles at this remote local train station. We passengers deposited our tickets in a basket held out by a station official. Outside, I purchased a ¥310 bus ticket to the highest accessible point of the Yudanaka park and waited for the bus.

This area is known for being an onsen town, and several famous onsens treat a variety of ailments. Guests staying at ryokans can visit the nine public bathhouses, each of which treat a different condition.

I’d dearly love to go one day. In the meantime, I took advantage of the free public foot bath directly behind the train station, sheltered from the elements by a clear plastic tent.

I removed my boots and two layers of heavy socks, and slid my feet into the footpath. The temperature of the natural hot springs water felt wonderful.

The bus arrived, and full of excitement, we climbed on board.

The park lies in a setting inaccessible by car. The bus transports guests only so far; the rest of the way involves a 25-45 minute icy trek through the fairytale-like forest of Japanese cedar and oak.

There are a number of signs along stretches of the path, most of them educational and filled with information on the monkeys. Some of the more amusing signage are advertisements, mostly from local restaurants, making clever pitches to a human clientele.

The forest eventually opened to reveal a few houses, a bridge, and the Shibu no Jigkudani geyser, spewing a continuous stream of mineral-rich water at 90 degrees celsius. Jigokudani literally translates to “hell valley”, which seems an incongruous name for a place so lovely and serene.

It seems an even odder phrase on Christmas Day. However, the word “hell” is meant very loosely and refers SOLELY to the hot steam. Interestingly, there are multiple “hells” throughout Japan. (I can personally attest that the three I have been to have been delightful.)

An old bridge leads to the historic Korakukan inn. It is said that the Korakukan’s riverside baths had provided the inspiration to create the snow monkey protected area —young monkeys had often been found playing and joining surprised human guests at their onsen,. Consequently, officials decided to entice monkeys away from human onsens and to a super exclusive monkey-only onsen of their very own.

Thus, two signs hung at the entrance to the wooden bridge to Korakukan, with arrows pointing species in the correct direction. An onsen for humans; an onsen for monkeys.

Snow Monkey Park, at the base of Joshinetsu Kogen National Park, opened in 1964.

I paid the ¥800 ticket and entered the park.

The Japanese macaque, aka snow monkey, is the “world’s northernmost non-human wild primate”, and the only species of monkey capable of surviving extreme winter temperatures.

The man-made outdoor onsen that the snow monkeys bathed in had been so artfully constructed as to blend in completely with the natural beauty surrounding it. Snow monkeys foraging for food pawed through the snow as if building a snowman. Younger monkeys energetically cannon-balled into the springs, swam underwater, or cuddled in groups off to the side. Older monkeys groomed each other or simply sat in the bath motionless.

There was no glass barrier separating human from monkey. The snow monkeys roamed the area freely. Indeed, the biggest threat seemed to be from photographers looking so deeply through their lenses that they would narrowly miss the snow monkey striding inches from their feet.

A park employee blew sharply on his whistle, and every head turned to see what the offense had been: a woman had traveled too far up the rocks to photograph a monkey.

It seemed an idyllic wildness, the Japanese macaques utterly unfazed by our presence. None approached looking for food. None made any attempt to interact with us. Seeing them so close added to the feeling of coziness and intimacy, that perhaps what we were seeing was truly real.

Snow Monkeys at the Onsen

It was entertaining to observe snow monkey social dynamics. While the scene was generally one of calm as they carefully groomed each other and alternated between trips to the snow and hot springs, there would occasionally be a disturbance when some unspoken rule was broken. More than one monkey was chased out of the water by a more dominant monkey.

I stayed so long I literally could not feel my fingers. As the sun started to dip and the cold bit more fiercely, it was with deep regret that I finally made my way back through the woods.

Much to my disappointment, the Rausu-an restaurant was closed.

Rather than take the train back, I purchased a direct bus ticket to Nagano. Christmas dinner consisted of a hot bowl of soba noodles with egg outside the Nagano train station.

Inspired by the snow monkeys, I took a hot bath back at hotel and mused over what a glorious day it had been. It had been a white Christmas after all, and I was one lucky woman.

What a wonderful Christmas day.

Nagano in Winter is absolutely MAGICAL. I loved every second of my time there.

I respect that some may have ethical concerns about visiting a monkey park. However, the park truly seemed to exist with the monkeys’ safety and well being in mind. There were no enclosures or barriers, and no one made any attempt to interact with the snow monkeys.

In retrospect, basing myself near the train and bus stations was one of the best choices I made.

Here’s wishing you a safe and lovely adventure!

Sea Leg Adventure uses affiliate links. If you purchase through a link, I may earn a commission, at no cost to you.

2 thoughts on “Christmas Day – Nagano and the Jigokudani Snow Monkeys”