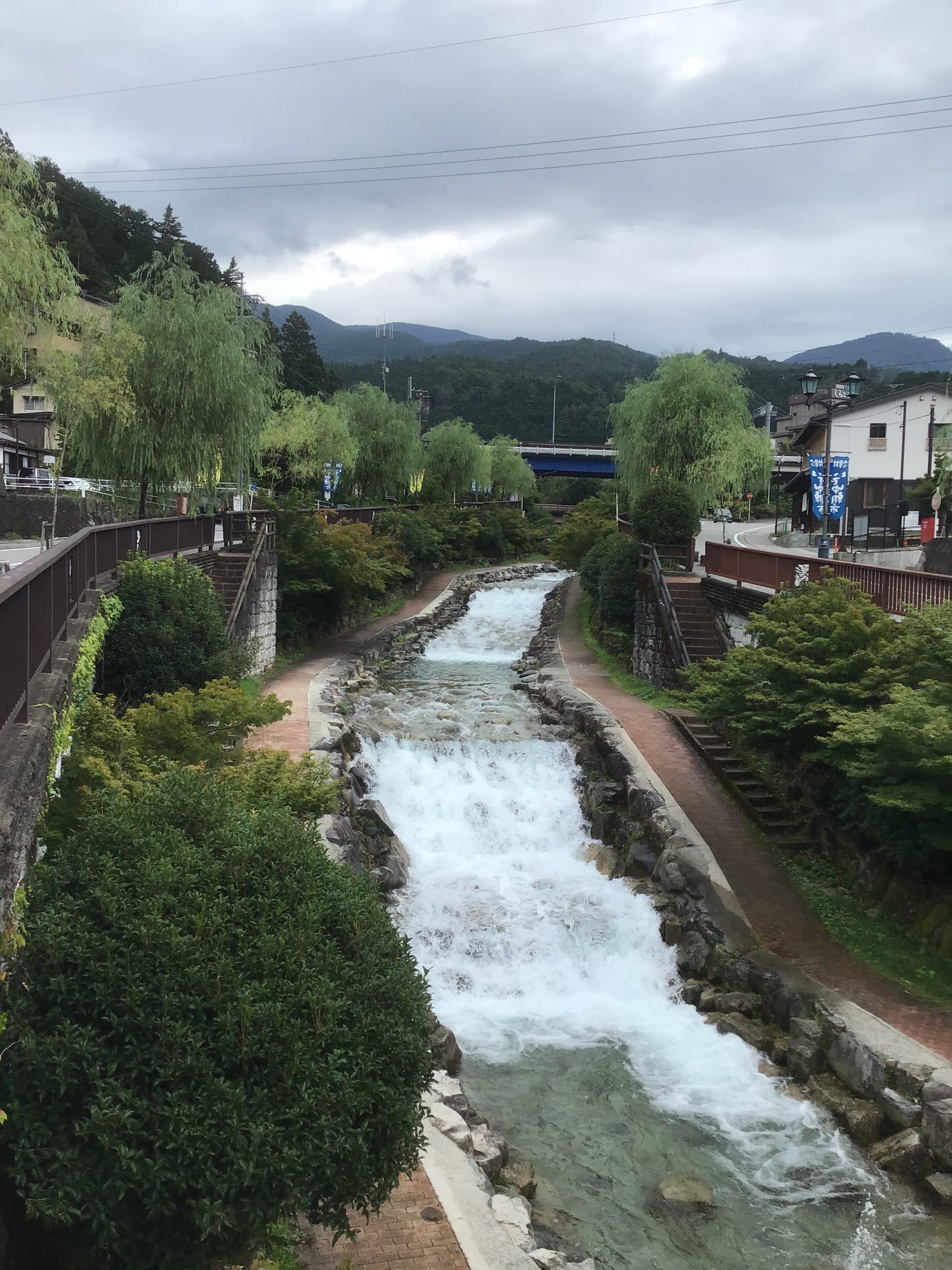 The lovely mountainous town of Gero Onsen has a long-standing reputation as one of the top three onsen towns in Japan.

For a country that takes their onsen seriously, that’s saying something.

The express train from Nagoya took just over 90 minutes.

In July, I had passed through by Gero Onsen on my way to Takoyama for a vacation in the Japanese Alps. Through the windows, I had been struck by how pretty the town was. I had also been surprised by how low the Hida River seemed.

Now, in mid-August, the Hida River was luxuriously strong and moving so swiftly that some sections had white caps.

Outside the Gero Onsen train station, a friendly woman at the tourist information center offered me a range of English maps and brochures. She informed me a special pass was available if I wanted to try the famous onsens. For ¥1350 ($9.84), I could purchase a wooden tablet that would grant me entry to any three participating onsens.

It may take Westerners some time to feel comfortable with the concept of onsens. As a society, we’re not really used to social bathing. Although public onsen are separated by gender, during my first experience with a Japanese bath I had been deeply self-conscious and darted in and promptly out of the water.

Now that I am more experienced, I can say with authority – NOBODY CARES WHAT YOUR BODY LOOKS LIKE.

They are infinitely more concerned with whether you properly clean and wash yourself before you join them in the bath. It’s your personal hygiene and how well you behave in the bath that matter.

With limited time to spend in Gero Onsen, I decided not to onsen-hop. Instead, I opted to walk around town. I wanted to try the famous therapeutic waters, mind you — but decided to spring for the publicly accessible open-air foot baths.

The weather was agreeable for walking, and an overcast sky lowered the temperature several degrees.

Gero Onsen leaves a great first impression. The streets are very clean, the river water is so pure it is transparent, and colorful flowers hang in baskets from lamp posts. Several lanterns lining both sides of the bridges feature individual hand-drawn art of legends and daily life. The streets are exquisitely well-marked in Japanese and English.

Although the town is very clearly reliant on domestic and international tourism, it never veers on the side of tacky.

It’s a fairytale of a place.

I had traveled the previous month to see the gassho-style houses at the UNESCO World Heritage Site Shirakawa-go.

Shirakawa-go is nestled in the Japanese Alps. Having been to the village of gassho houses, I had been skeptical about visiting the Gero Onsen Gassho Village, where nine gassho-style homes had been re-located.

I am super happy I decided to check it out.

I love the distinctive architecture, with the steeply sloped thatched roofs designed to withstand heavy winter snows. Most striking of all is the shape, which resembles hands clasped in prayer. All of this adds to the sensation you’ve stepped back in time.

Inside the village houses, artists share lessons in pottery and art and sell traditional crafts. The craft activities seemed to be very popular for families with children, as well as young couples.

The surrounding grounds are equally as quaint, with ponds full of colorful coy fish and beautifully tended gardens.

In addition to selling crafts, some of the houses served traditional food. One such house offered fresh, Hida-caught fish grilled in charcoal for ¥850 ($6.20). After a few minutes on the grill, the fish was served very simply on a traditional dish with a bit of salt. And that was all it needed. Whether it was because of the clean mountain air, or crystal clear river water, that fish was OUTSTANDING.

After the early lunch, I stopped by a foot bath and soaked my feet in the warm water for a few minutes.

I’m delighted I went – it was definitely worth the trip.

Any visitor to Gero Onsen cannot help but notice that the town seems to have an infestation of frogs. There are frogs statues and motiffs everywhere. Frogs appear in the most unexpected area. They show up as mosaics, are embedded into the asphalt. Their shape is even used for cookies.

What’s with the frog fixation?

It boils down to language. To the Japanese, the sound “gero” sounds like the croak a frog makes. Since the town is named Gero, the frog became associated with the town.

Furthermore, the Japanese word for “frog” and “return” is the same – kaeru.

Hence, the love for frogs. There’s even shrines dedicated to frogs, with the offertory coins stuffed deep into the frog statue’s open mouth.

But interestingly, it’s not the frog that’s the town’s official mascot – it’s the egret.

There are 173 stone steps leading past grave markers to Osenji Temple.

Which is perhaps why I was the only person there.

In 1265, a massive earthquake had caused the town’s healing waters to dry up and disappear. One day, the villagers observed an injured white egret and decided to follow it. The egret led the villagers to new sources of healing water, and they established a temple in gratitude.

As seems fitting, the Osenji Temple is dedicated to Yakushi Nyorai, the Buddha of medicine and healing.

There’s a strong honor system in place. Many of the amulets are left unguarded on an open table – it’s just expected that pilgrims will do the right thing and leave the proper amount in the designated box.

I paid ¥300 for the traditional wooden tablet, wrote my prayer, and hung it on a post along countless others.

After all the stair climbing, it was by pure chance that I saw a sign offering massages. In Japan, many massages occur not only fully clothed, but with towels draped across you for extra privacy. For a super reasonable ¥4600 ($33.53), I got a massage so terrific I fell asleep.

Post-massage, the woman showed me her phone and the hourly weather forecast. With rain storms for the next several hours, she insisted I take an umbrella.

I tried explaining I would not be able to return it – I was staying the night in Nagoya – but she dismissed my argument. It was raining, and she refused to let me walk around town without an umbrella.

I’ve said it many times, but there’s a reason Japan deserves its reputation for hospitality.

After a lovely, leisurely walk through town it was time for another restorative foot bath.

Most of the outdoor baths adorably feature some quirky motiffs. One of the most popular is by a European-styled fountain with a nude Venus. Another, located outside a dairy and confection shop, has a model calf in the bath.

I set forth for the onsen I was most intrigued by. At Yuamiya, you can soak your feet AND steam your special custard pudding at the same time.

Aside from the onsen-steamed custard pudding, the shop is also known for a soft cream served with egg and corn flakes. With my rudimentary Japanese, I made it as far as requesting the matcha custard (success) and asking for something with an egg on top (success and fail).

Instead of the soft cream with egg and corn flakes, I got a sublimely unexpected combination of egg, rice puffs, warm rice, meat, and ginger. What might sound odd is TOTALLY SUBLIME. The textures and flavors in combination are PERFECTION. Although it wasn’t what I had expected (failure on my part), it was an utter delight.

I put the bottle of matcha pudding I’d purchased into the boiling bath located across from the foot bath and gave it a few minutes to heat. I retrieved the bottle and pulled a packet of hot caramel from the adjacent basket.

The dessert was wonderful. I looked around me at people happily eating pudding and soft cream as their feet soaked. There was nothing but joy on their faces.

I am utterly charmed by Gero Onsen.

Visits to this small town are wonderfully scalable. The well-heeled in search of decadent pampering can stay at ryokans and enjoy Hida beef in between private onsen baths.

For the economical adventurer, there are plenty of free foot and hand baths throughout the city, and admission to many attractions are inexpensive. Finally, street food is plentiful, reasonably priced, adorably quirky, and packed with flavor.

Gero Onsen is particularly well-suited for those who aren’t quite ready to try traditional Japanese bathing, but who would like to enjoy a relaxing and experience in a truly stunning location.

Gero…Gero…with your friendly people, frogs, and fairytale loveliness, I will definitely return one day.