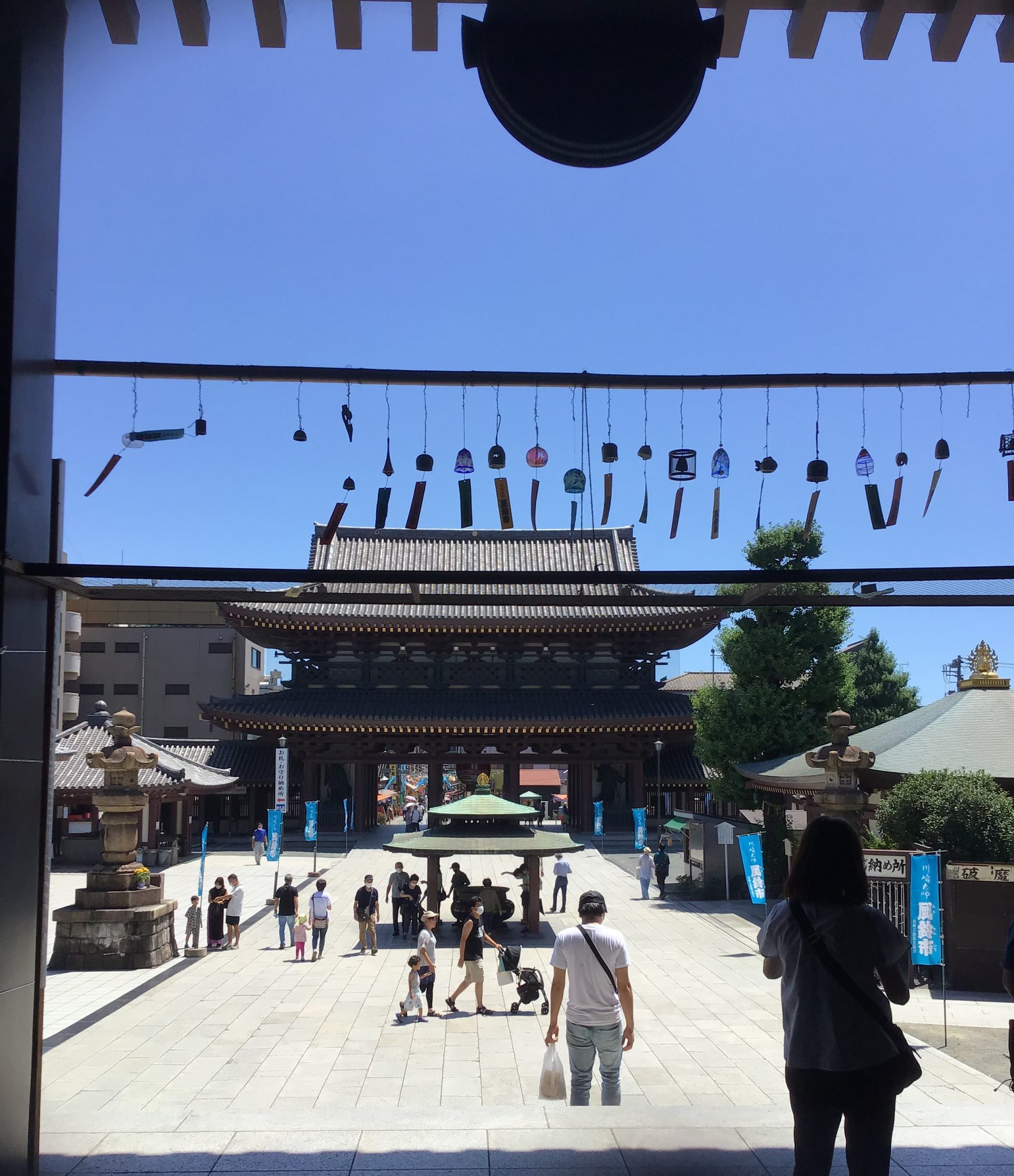 Outside it was a sultry 98 degrees Fahrenheit and still climbing. I could either stay in an air-conditioned apartment. Or I could experience cool a traditional Japanese way – by heading for the Kawasaki Daishi Wind Chime Festival.

Furin means “wind chime”. During a hot July day, the sound of the tinkling bells moving with the breeze is supposed to make you feel refreshed, invigorated.

It’s worth noting that Japanese use air conditioning much differently than Westerners. Whereas its not uncommon for Westerners to crank the a/c to the point of goosebumps, Japanese use just enough to prevent the growth of mold.

I was keen to put the ancient practice of wind chimes as a means of staying cool to the test.

History of the Japanese Wind Chimes

Wind chimes originated in China, and made their way to Japan – along with Buddhism – some 2000 years ago. The furin were originally strung on bamboo stalks across temples along to protect against evil.

Specifically, the wind chimes were thought to ward off the spread of disease brought about by high temperatures and humidity.

Originally, the furin were constructed of bronze. In the 18th century, the Dutch introduced glass-blowing techniques to Japan. While initially very expensive, as time passed and the costs went down, glass-blown furin grew in popularity.

There are three parts to the furin: 1) a bowl-shaped exterior, 2) a clapper inside to make the sound, 3) a strip of paper tied to the clapper to catch the wind.

Impressively, modern furin are painted FROM THE INSIDE to ensure that the design remains fresh even after being exposed to the rain, sun, and wind.

As the headquarters of the Chisan School of Shingon Buddhism, Kawasaki Daishi has a reputation for warding off evil. It’s less than 15 miles from Tokyo, and easily reachable from Yokosuka.

The temple was founded in 1128. The original structures destroyed during World War II and were re-built post-war.

Outside, I lit a package of incense and placed the sticks in large burner, copying the Japanese by wafting smoke around my body.

A long row of bells hung from bamboo stalks across the entrance to the main temple. Every bell was unique in shape and design, representing different prefectures across Japan.

A couple with a precious baby girl with a full head of hair was being photographed by doting relatives and friends. Judging from the formal, elegant way they were dressed, this was a very special occasion.

I removed my shoes to enter the temple and stepped onto the tatami mats. Electric fans circulated air around the room. One thing I greatly admire about Japan is how welcoming the Japanese are of those who clearly are not of the same religion. It is enough to simply show up respectfully and express an interest.

Outside, a long line of food vendors grilled a range of delicious-smelling foods: it was lunch time. I felt a mixture of curiosity, awe, and sympathy for those grilling on such a hot day. One vendor beckoned me over. As it so happened, he was selling one of my favorite street foods – takoyaki. Takoyaki is a delicious combination of diced octopus, pickled ginger, and green onion mixed in a flour batter and cooked in the shape of balls. I ordered a set of six.

There was an empty bench in the full sunlight. My flesh burned slightly as I sat down, unmasked, and ate the hot takoyaki. Several meters from me, older, unmasked Japanese sat on shaded benches. I got the impression they were in no hurry to go anywhere. They seemed content just to be outside in the shade, to people-watch, and to listen to the tinkling of the chimes.

The wind chime market directly outside Kawasaki Daishi is reputed to be the largest in Japan. Lines of wind chimes were festively strewn across the street and across the entrance to every shop.

I wonder how much of the association with furin and cooler temperatures is mental. That is, if you hear the furin, then it goes to follow there are breezes. And if there’s a breeze, then clearly it’s not as hot as it was before.

Or is it that the case that as humans we associate high-pitch sounds with the same chills and tingles one gets when cold?

Whatever the case, I did feel slightly cooler.

In addition to the brightly colored furin (¥2000 – ¥6500), vendors sold Daruma dolls and traditional Japanese delicacies. I heard wonderfully rhythmic pounding coming from one end of the market and went there thinking there was a ceremonial drummer of some kind. In reality, the music came from a duo making traditional candy.

In addition to the candy, I purchased a furin. With so many designs and shapes, it was difficult to pick one. Eventually, I decided on a red Daruma-shaped bell. In an area with fairy-tale like colors and designs featuring flowers and animals, the Daruma’s frowning countenance somehow made me smile.

The shopkeeper wrapped the glass furin carefully and thoughtfully slipped a paper fan into the bag.

That I stopped at this shrine was solely because after taking two local trains to get to Kawasaki, it seemed wrong not to see what other attractions were in the area.

It was by complete surprise that I learned that one of the recommended attractions – for Westerners, at least – was to see Kanayama Shrine. What was it known for?

Its large statue of an iron phallus.

The Kanamara Matsuri festival is held in April, during which this phallus is paraded around town. Pre-COVID, the bulk of the 30,000 attendees were reported to be Westerners. The blogs I read focused on the inclusivity of the shrine and festival: while they are associated with marital harmony, fertility, and good business, ALL ARE WELCOME.

I wasn’t quite certain what to expect.

Kanayama Shrine was an easy 10 minute walk from the Kawasaki Daishi. Much to my surprise, the shrine grounds were empty. Moreover, the shrine looked…well, like a shrine. It was peaceful, with a beautiful quiet dignity.

I wandered around the grounds. The only clear distinction between this and the other shrines I had been to was the iron phallus, which had a shinto rope strung around it marking it as sacred.

Perhaps Western fascination in this shrine stems from the fact that there are no churches that we can compare it to.

One area houses wooden prayer tablets displaying the wishes of those praying for children. Some bore images of babies; some, curiously, one wooden design depicted a dog nursing a liter of puppies.

There was one prayer tablet with English writing. The couple requested the blessing of a healthy baby, of any gender.

As I got ready to leave the shrine, two young men approached the shrine, bowed, clapped, and bowed again.

My final stop before heading back for the comfort of an air-conditioned apartment was to see a novel attraction: the world’s shortest escalator.

A.k.a., the “petit escalator”, puchi-kareta, or puchi-kareta. This diminutive, certified wonder comes in at a whopping five steps and a height of 83.4 centimeters.

I entered the JR terminal and burrowed toward the basement. While activity above ground was fairly muted due to sweltering mid-day heat; safe in the underground air-conditioned passages, it was packed.

I moved in search of exit 29, half expecting it would be packed with people looking to photograph the record-setting escalator.

Much to my surprise, there were but a few people. All looked surprised when I frantically began taking pictures. Note: it was so hot, that my photos are all distorted.

The longer I studied the escalator, the broader I smiled.

The Japanese are brilliant engineers. They excel at design and the efficient use of space.

This escalator seemed pointless. And since the escalator can only be accessed by a small flight of stairs, I can only assume one thing: what a cheeky sense of humor! 🤣

I truly enjoyed my day in Kawasaki. It is well worth a visit for those who live in Yokosuka, Yokohama, or Tokyo, or for those who are in Japan on a long stay. Although I won’t be hanging the furin on the balcony out of respect for my neighbors, I plan on keeping the furin indoors where I can see it, admire, and reflect.

Kawasaki Daishi is an easy 8 minute walk from the nearby train station. If you go during the Wind Chime Festival, please know that many of the shops only accept cash – make sure to bring Yen!