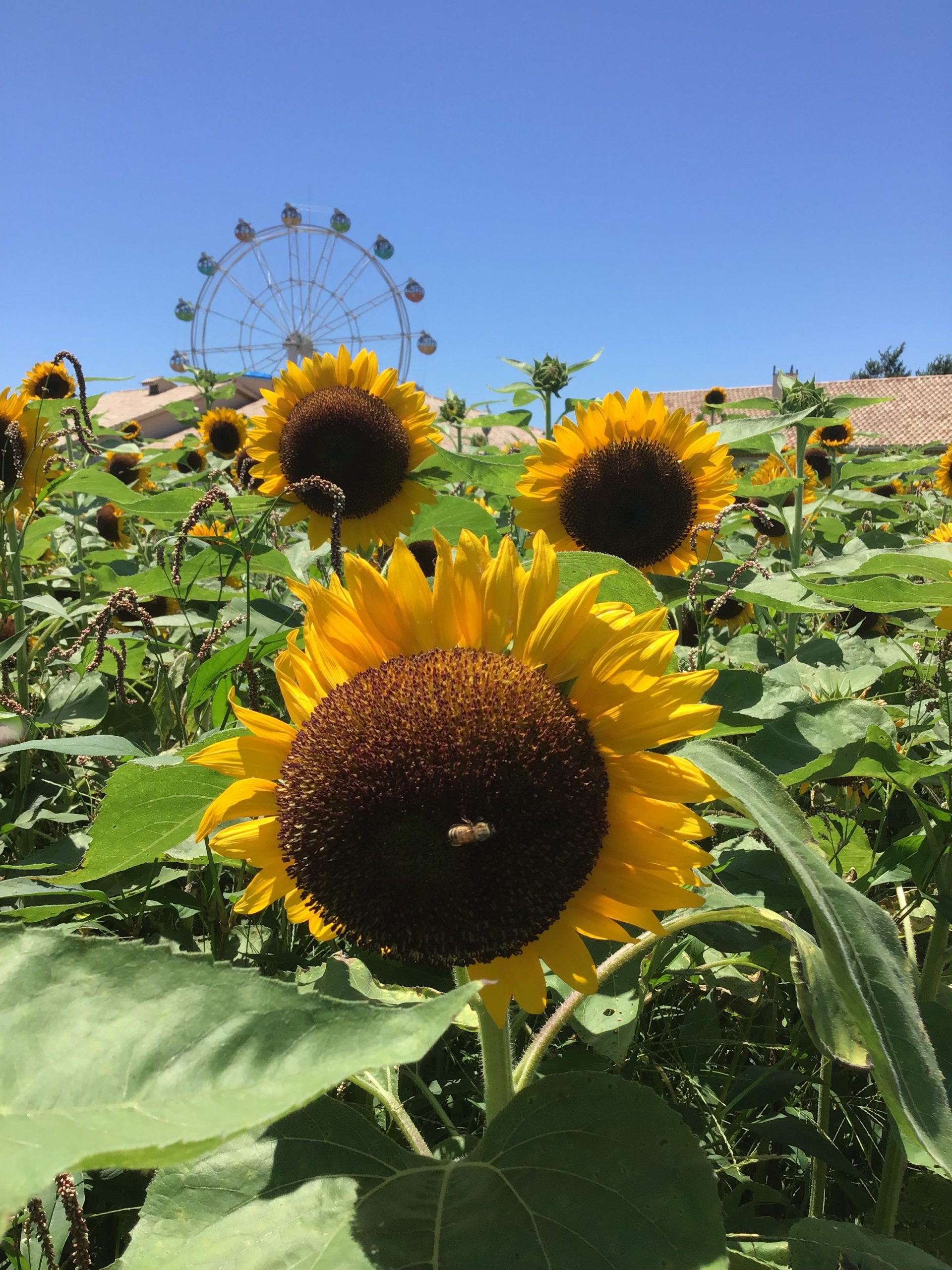 I was in a field of more than 100,000 sunflowers set against a cloudless blue sky. The last time I saw this many sunflowers, I lived in Kansas. Clearly, I was not in Kansas anymore.

The gorgeous abundance of tall sunflowers at Soleil Hill is located on Japan’s Miura peninsula. According to the brochures, Soleil Hill is patterned after a provencal village in the South of France.

I can’t be the only one who feels a little confused – a provencal village in France…with views of Mt. Fuji…resident kangaroos…and the sound of live American country music?

A July Afternoon With Sunflowers at Soleil Hill

Although Soleil Hill is within 12 miles of Yokosuka, I kept finding reasons to postpone. Chief among those reasons is that it’s best accessed by car. A 2.4 mile walk on a muggy July day requires some commitment.

The closest train station is Misakiguchi on the Keikyu Line. As is always the case every time I go to the Miura Peninsula, it’s astounding how quickly city life transitions to agricultural. The Miura Peninsula is best known for its farms and the quality of its seafood.

It was a 50 minute walk from Misakiguchi Station to Nagai Seaside Park – Soleil Hill. I passed alongside and then through several small farms. True to its name, Soleil Hill involves a bit of a climb uphill, and I drained three bottles of cold green tea enroute.

It’s free to enter Soleil Hill, and several attractions of the park (such as playgrounds) are free. The ticket vending machines are for guests who want to participate in certain optional activities: archery, Go Cart racing, grass hill sledding, or a ride on the Ferris Wheel or carousel. As one might expect from such activities, the bulk of clientele were clearly parents and children under 12.

I was not there for the rides or activities – I was there for the sunflowers. Soleil Hill is considered one of the best places of Japan to see them.

And let me say that those fields of sunflowers are nothing short of astounding. Guests can get lost in asunflower maze boasting sunflowers well over six feet high, every bright flower radiating sunny perfection. From one angle, I can see how this field might resemble a romantic destination in France. Furthermore, the fountains and sculptures feature chubby cherubs or scantily clad figures that are definitely designed to evoke Europe. Finally, there’s the name itself: “Soleil” hill.

But it’s hard to sustain the French illusion. Turn slightly and the sense of place shifts again.

Hey, is that Mount Fuji?!

Turn again, and your senses process a giant Ferris wheel, a carousel, and the sound of live country music. All of a sudden, you’re at a wholesome midwest American State Fair.

I heard the sound of live country music and followed the sound, curious what Westerners had been brought in. A seven piece country band was playing in a lovely shaded pavilion by a man-made pond. The band wore plaid shirts, blue denim jeans, and cowboy hats, and they were NAILING the folksy tunes.

They were all Japanese.

Not Your Every Day BBQ

After the band finished their set, I was lured away from the lovely shaded pavilion by hunger pangs combined with the smell of BBQ.

I’ll blame the music for setting the stage for country food. Once again, the posters I saw for the BBQ area featured men in cowboy hats. I approached the counter.

“I am afraid there is a minimum 2-person order.”

I was ravenous from the walking.

He directed me to a picnic bench and produced two large baskets; one with charcoal, and the other with pre-packaged foods and supplies. Feeling a little baffled and foolish, I looked at the picnic area for the first time – the guests were not merely EATING BBQ, they were grilling the food themselves.

Part of the fun for the Japanese was a luxury many city-dwellers could not do: an outdoor grilling experience.

In addition to the supplies, the man also offered me a laminated sheet with step by step directions in English on how to BBQ.

As a card-carrying American, I’ve been to many a BBQ of course. I’ve just never been the one doing the grilling.

Thus, the fire I started was tentative. The staff member who had been brought supplies might have been too polite to say anything. Still, I surmised from the expression in his eyes that at the rate my fire was going, I’d be lucky to eat before dinner. I threw more charcoal on and the fire took off.

The packages that had come as part of the authentic “Do It Yourself” BBQ included two packs of soba noodles, beef, chicken, and pork, along with two packs of vegetables and two sausages. I slid the soba noodle packets along with the pork package into my backpack to cook back at my apartment.

The remaining packages I opened and threw on the grilling tray with the special sauce.

Several minutes later, I tasted the fruits of my labor. My technique might be lacking, but I had done all right.

I might have forfeited my BBQ credentials with the set-up and the grilling, but I was grimly determined to impress with my ability to separate trash correctly and scrub. (Yes, you are expected to clean up your own mess.) I took the grilling tray to the sinks and went to town with the steel pad. I’m deeply proud that all three staff employees stopped and made grunting notes of approval when I returned the tray.

The only ticket I bought at Soleil Hill was a ¥320 ticket to the Animal Village. As aforementioned, I was tickled that this village in France, or this wholesome mid-West State Fair, included kangaroos.

In addition to the kangaroos, the Animal Village includes capybaras, llamas, ponies, giant tortoises, rabbits, dogs, and birds. After presenting my ticket and sanitizing my hands, I was permitted into the enclosure with the kangaroos and capybaras. (If you’re curious what a capybaras is, and I had to look it up, it’s a giant rodent native to South America.) For ¥100, guests can purchase approved pre-set portions of food to feed the animals.

The kangaroos were indifferent to the food I offered and wisely chose to stay in the shade. I did enjoy the chance to see and pet my first capybaras.

The animals looked fit, healthy, and well cared for. Moreover, the staff was attentive about ensuring the animals were not overly stimulated. A sign posted outside the dog and rabbit enclosures noted that the animals had experienced enough interaction for the day.

I did have the opportunity to observe the 2:30 p.m. bird show, which featured owls, macaws, and hawks. While my limited Japanese meant I failed to appreciate much of what was being said, I was in awe over how much trust the staff had in the audience to behave properly. The birds flew up and down the rows of benches literally inches from guests. And yet, not a single person made any attempt to reach up or across to touch a bird.

Walk Back to the Train Station for Some Farm Fresh Produce

The 2.4 mile walk back to the train station was much easier than the way up had been on account it was down hill.

I stopped by a farm across from the train station, where a farmer was selling fresh soybeans and watermelon. One of the fascinating things to me about Japanese farms is that the fruit or vegetables being sold is more often than not growing very near a sidewalk. There are no barriers to prevent someone from reaching out and plucking their own fresh food.

And yet, the system here is based on honesty and trust. You don’t take that which does not belong to you.

The honesty extends both ways.

For example, the Japanese are very honest when it comes to quality control of food, and they price their produce accordingly. My eye and tongue could not distinguish between the ¥1800 watermelon and the ¥3000 watermelon on display – to me they looked identical. I bought the ¥1800 watermelon, thanked the farmer, and cradled the watermelon like an infant to the train station.

Oh yeah, I carried a watermelon. Take that, Baby.

There might have been a few bemused looks on the train. Thankfully, I scored a seat.

Back at the apartment, I thwacked into the watermelon and began cutting slices. That trip to Soleil Hill marked a series of firsts for me. It was my first time outdoor grilling the whole meal, and the first watermelon purchase of my adult life. It’s hard to justify a whole watermelon for one person, but I felt like celebrating.

The watermelon was cool, crisp, refreshing, chock full of seeds, with just the right amount of sweetness.

What a lovely day on the Miura Peninsula.

Soleil Hill is particularly well suited for families with small children. There are a number of wading pools for young kids to stay cool, and plenty of playgrounds. Although I chose to walk the 2.4 miles each way, I don’t think this is a practical option for most. There looked to be plenty of parking spots for ¥1000.

In addition to families looking for wholesome summer activities, I also saw a number of young couples. The singletons I saw were – like myself – there for the flowers. While the sunflowers are best in July and August, Soleil Hill features a selection of flowers year-round.

Given that Soleil Hill melds so many influences together into one park, it took me awhile to place the feeling of being there. I guess it doesn’t really matter. The experience felt like a carefree summer day, with the wholesomeness, innocence, and nostalgia of a Normal Rockwell painting.