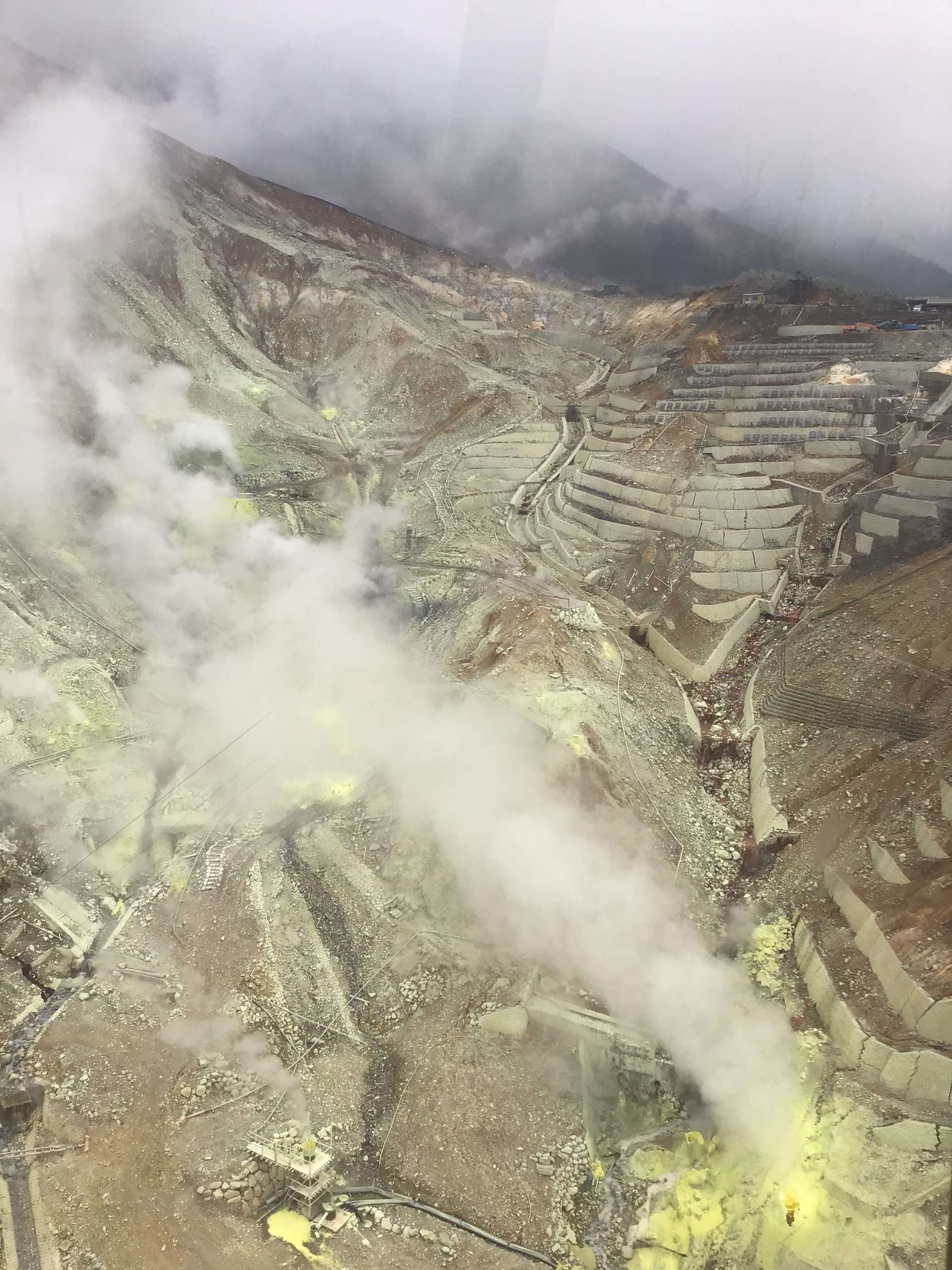 The Japanese have one of the world’s highest average life expectancies (85). Can the secret to their longevity be a black egg from Owakudani?

Eating one of Owakudani’s black eggs is said to add seven years to your life.

Of course, it’s a terrible assumption to think a single egg can be a game changer. Japanese longevity is most likely due to a healthy diet that is heavy on fresh produce and sea-based protein. That, and the fact that the mountainous country affords plenty of opportunity for regular exercise.

However, let’s be honest – the black egg legend is fun. Those who venture to Hakone and nearby Owakudani are guaranteed – if not an additional seven years of life – then a unique and a memorable experience.

Hakone, a town located in Japan’s Fuji-Hakone-Izu National Park, is gorgeous all four seasons. In theory, it is a wonderful base from which to view Mt. Fuji.

I say “in theory” because each of the two times I’ve been to Hakone it’s happened to be overcast or raining.

Still, even if you can’t see Mt. Fuji, I’d still enthusiastically recommend a trip. The region is THAT beautiful.

Kuro-tamago, literally “black eggs,” are regular chicken eggs boiled in Owakudani’s natural hot springs. While the shell is black as tar, the egg underneath is khaki or cream-colored.

Ever wondered what an egg steamed in the smell of rotten eggs of Hell Valley tastes like?

DELICIOUS. Those eggs are sooooooooo good. The taste of the sulfur-steamed black eggs is salty and strangely addictive.

Thanks to a clever marketing scheme, you can only purchase eggs in groups of four or five. I had originally planned on showing my platonic love for work colleagues by solemnly presenting them each with a Hakone egg post-trip. After seeing a sign that said the eggs were best consumed within two days, I wound up buying one pack and eating all four eggs myself.

Black eggs aside, the popular thing to try at Owakudani is curry. Although the specialty is curry and rice, the latest trend seems to be black curry bread. Underneath the image of the bread were the words:

“I wish that it’s in your wishing.”

I requested a black curry roll and sat at a window overlooking the fumeroles. A few bites into the warm, perfectly baked bread I found the warm, dark curry filling inside. It was perfect for a chilly autumn or winter day.

Getting to Owakudani is an adventure in itself. It’s possible to drive. However it’s inadvisable since the roads can get crowded and parking is limited.

The Hakone-Tozen line was modeled on the single-track Bernina railway in Switzerland. There are three switchbacks and several sharp curves during the 8% climb. The climb is one of the steepest ascents/descents in the world for a conventional railway.

After exiting the train at Gora station, take the cable car to Sounzan. (¥430, $2.94) From there, take the ropeway to Owakudani. The gondolas operate at one-minute intervals, so the line goes quickly. Best of all, the well-designed gondola has generous windows to showcase the spectacular views below.

Expect to gasp as the car rounds the top of a hill. You instantly go from rich green mountain vegetation to a barren landscape punctuated by swirls of steam courtesy of the fumeroles 130 meters below.

Immediately upon exiting the cable car you’ll be engulfed in the distinctive smell of sulfur.

Owakudani is a volcanic basin that was created some 3,000 years ago following the eruption of Mount Hakone.

It has earned several nicknames as a result, ranging from ”Hell Valley” to the ”Great Boiling Valley”. Aside: I’m totally fascinated by just how many ”Hell Valleys” Japan has. I’ve adored every one of them.

The area hasn’t had a major eruption in more than 800 years, but it has rumbled recently due to the flow of hot underground gasses and volcanic matter. Because of the increased activity, the walking paths to many observation areas are now sealed off.

Since this is Japan, a country that loves museums, there’s a small museum at Owakudani to explain the area’s unique geology.

One thing I really find delightful about Japan is that they have a sign or diagram to cover almost every topic under the sun. And OF COURSE there is a plan on what to do in the event of a volcanic eruption. Unfortunately, it seems the only recourse is to run inside a building.

From Owakudani, many take the ropeway on to Togendai to see the famous Lake Ashi.

According to legend, a nine-headed dragon had terrorized the local villagers. A monk named Mangan came and pacified the dragon, which now resides at the bottom of Lake Ashi and acts as a protector. Every February, a grand firework show is held in the dragon’s honor.

While a walk along the lake is delightful, many choose to take the Lake Ashinoko Ferry to get to the most celebrated destination – Hakone Jinja.

Hakone Jinja was built in 757. Travelers, samurai, and faithful have stopped at the shrine over the course of several centuries to offer prayers for traffic safety and good luck.

Nearby, an enormous Torii Gate called heiwa no torii (“red gate of peace”) frames the lake. It’s a photographer’s dream, and you can expect to see a long ling of people patiently waiting their turn to pose.

Hakone-Yumoto is about an hour from Tokyo’s Shinagawa station. Although it’s possible to make Hakone a day trip from Tokyo via the Romance Car or Shinkansen, why not savor the experience and spend a night?

This area is famous for the therapeutic qualities of its hot spring waters. Some of the spring water from Owakudani is used to power the many hot springs in towns below.

Be mindful that many public onsens will deny entry to those with tattoos (since in Japan tattoos were closely associated with criminal activity). While attitudes towards tattoos have evolved, many onsens still abide by strict no-tattoo policy. Therefore, the best way for those who have tattoos to experience the onsen culture may be to book a private bath at a ryokan.

Ryokans are traditional Japanese inns offering delightful Japanese hospitality. Those who stay at a ryokan should expect to be pampered. Breakfasts and dinners are lavish affairs, with fresh ingredients from land and sea showcased on tiny plates and served either in your room or at a communal area.

Is a ryokan for everyone? No. There are some who won’t relish the idea of sleeping on a futon and who are uncomfortable with the idea of communal baths. Ryokan also tend to be more expensive than traditional hotels, making them an extravagance for those on a strict budget.

However, there’s a group that will try a ryokan and immediately fall in love.

Here’s wishing you a long and happy life, and a glorious adventure!

Is a Japan Rail Pass Worth It? 5 Practical Case Studies

One thought on “Hakone, Owakudani and 28 Years of Black Egg Longevity”