In Search of the 7 Lucky Gods of Kamakura 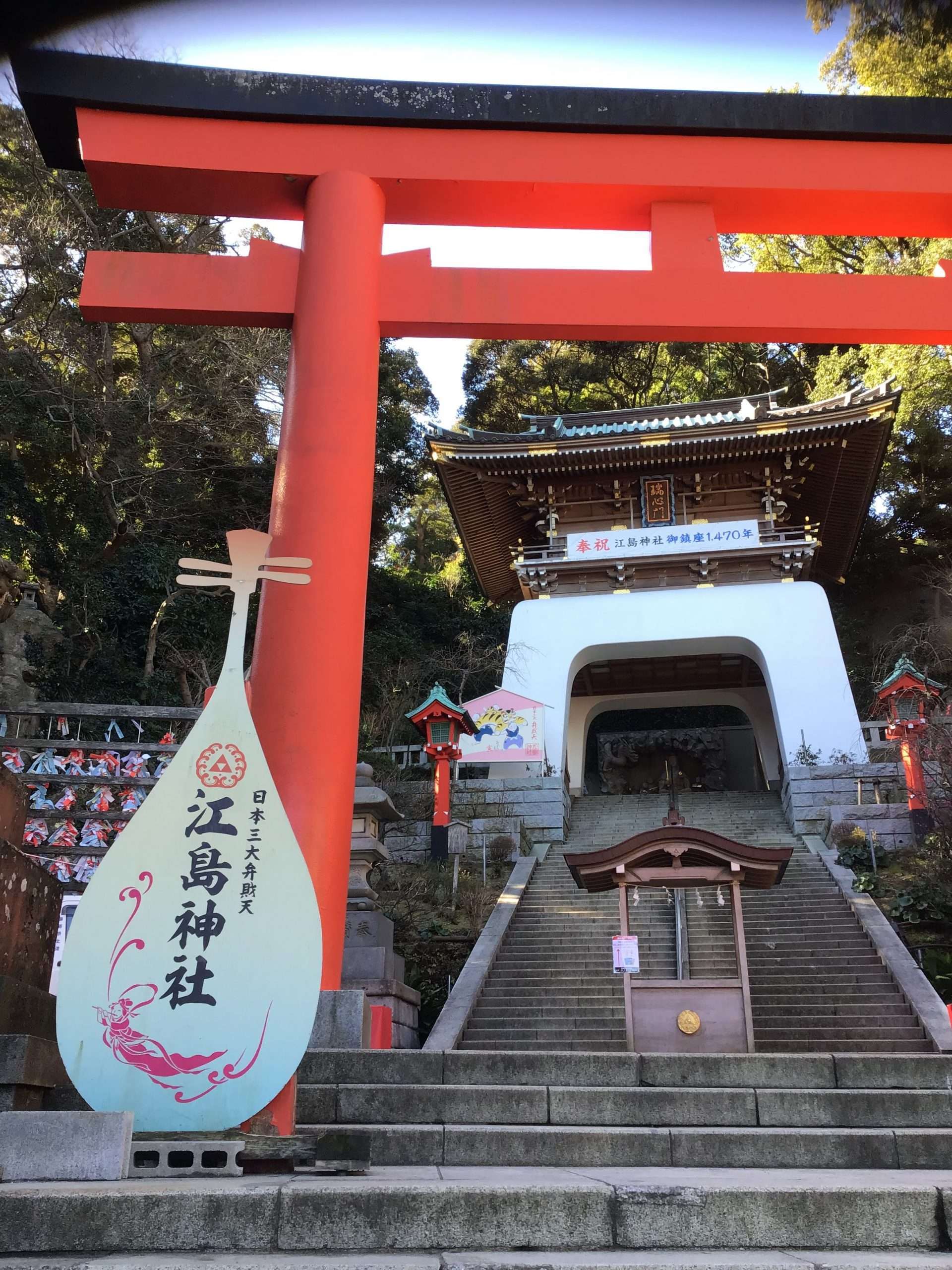 Who wouldn’t want to find seven lucky gods? This particular pilgrimage in search of the 7 lucky gods of Kamakura, known as a Shichifukujin, was both an expression of devotion and something of a treasure hunt.

The Japanese are serious when it comes to official documentation. I never fancied myself a stamp collector. But as soon as I saw a stamped pilgrim board I craved it.

There are hundreds of pilgrim route combinations. I had opted for the Shichifukujin for a reason less noble than devotion: I liked the design of the pilgrim board, and the only way to get it was to go on a pilgrimage.

Technically there is no time limit for visiting the eight shrines and temples. (The goddess Benzaitan is honored with TWO sites.) Nor is there any requirement that they be completed in any particular order. Nonetheless, I was determined to see all eight in one day.

I chose to go President’s Day, Monday, February 21. Living in Japan, my favorite trick is to travel during a holiday not celebrated by the Japanese. Attempting the pilgrimage on what was for the locals a work day ensured the lightest possible crowds.

And the weather that day was spectacular. The first buds had begun appearing on the trees, and the breezes were strong and fresh.

Kamakura is an easy day trip from Yokosuka. Since I expected to be tired by the end of the journey, I decided to begin my pilgrimage with the furthest site, and make my way back to the high-concentration area in Kamakura. I took the local train directly to Kamakura and transferred to the Enoden line, which afforded stunning views of the ocean and a snow-capped Mount Fuji. It was surreal seeing surfers and palm trees on my left, and my favorite mountain on the right.

The first stop was Enoshima and the goddess Benzaitan.

1. Enoshima is one of my favorite local places to go for a day trip. A bridge with cheerful pansy flowers connects Enoshima, a small island about 2.5 miles wide, to the mainland. Before the bridge, villagers would access the island by boat. Legend has it that the island was created after a terrible dragon wreaked havoc across the region. He met the beautiful goddess Benzaitan, goddess of eloquence, music and wisdom, and vowed to reform his evil ways.

The dragon motif is strong on the island, from the carvings to the sculptures, to the lanterns lining the streets. That morning, the main street was all but empty, the commercial shops and restaurants lining either side just starting to make preparations to open for the day. One thing to note about Enoshima…it is heavy on the stairs! You will definitely get a good leg workout in.

Although many shrines and temples are free, this particular shrine required a ticket to visit. I was directed not to take photos indoors and to remove my hat. Once inside I saw a lovely display of sake, fresh flowers, eggs, and produce – gifts to the goddess.

I walked across to a small outdoor office that sold commemorative pilgrim items and hesitantly asked in my best Japanese for a Shichifukujin board. There were two options. I paid for the board and a stamp and watched with great interest as she went to work. What I had thought would be a simple five seconds to casually drop a stamp on the paper turned out to be far more complex. The process involved a series of three different, meticulously placed stamps. The woman then carefully dipped a small brush in black paint and drew characters over the black stamps. That I had no idea what was written only increased my fascination.

Enoshima being one of my favorite places, part of me wanted to linger longer. But my timeline was very tight, and I headed back to the train station. Along the way I saw a food van and decided that since it was unlikely I’d be able to stop for lunch, now was a good time to fuel up.

I had learned just enough Japanese to recognize the hiragana for ”shirasu” – whitebait fish and one of the region’s specialties. I ordered this satisfying snack, baked fresh and covered with hundreds of tiny shirasu.

2. Hasa-dera Temple, my second stop, honors Daikokuten, the god of agriculture, farming, wealth, and commerce. Located 300 meters off Hase Station, the temple’s wooden effigy of Daikoku dates back to 1412. The temple gardens were popping with blossoms in red, white, and pink, with a lovely pond. It was immediately obvious that under normal conditions this was one of the more popular temples. A small hill on Hasa- grounds is especially loved for its views of the ocean, and for the beauty of its summer hydrangeas. As it was a brisk day in March, groundskeepers had erected signs to give visitors an idea of just how stunning the area would be in June.

3. Goryō Jinja Shrine – Fukurokuju is said to be the god of wealth, happiness, and longevity. The shrine was also very near Hase station, and literally steps from train tracks. It was a small shrine, with no admission fee, and I was the only person there. As I approached an office, presented my board, and paid for the stamp, a black cat sauntered saucily in front of me.

I was very pleased with the time I was making and decided to walk to the 4th destination, Jochiji Temple. Although it was February, I had to shed my outer coat and gloves; I was generating plenty of heat walking. My app directed me off a surprisingly busy road and as if by magic I found myself in a quiet, serene forest.

4. Jōchiji Temple – Hotei is the god of contentment, happiness, bartenders. Westerners would recognize Hotei as either the Fat or the Happy Buddha. I paid the entrance fee and walked along the trail before seeing a wood sign with an arrow. I could just barely decipher the faded words.

Walk This Way. The God of Happiness (could not decipher) is waiting for you in the cave.

What an irresistible invitation!

Getting to the cave required walking through a small cemetery. I have so much appreciation for Japanese cemeteries. Most of the cemeteries I have been to have designated areas with brooms, scrubbing brushes, and water buckets for people visiting to tend to a loved one’s grave marker. Far from being depressing, Japanese cemeteries are clean and overwhelmingly well-maintained.

I found the cave and spied a joyful looking statue straight ahead. The cave was an open one, and so the statue of Hotei had tree-filtered natural sunlight dancing on him. I was enraptured just looking at him. Perhaps it was purely psychosomatic, but in seeing the god of happiness I myself was giddy with happiness. I loved everything about this statue, from his friendly, wise, open, amused expression to his hand gestures. I could not believe my luck at being the only person there. Behind the fresh flowers at his feet stood an unopened bottle of sake, no doubt an homage to his status as a patron to bartenders. I prayed, I chatted, I took selfies with him.

I was both re-charged and regretful to leave. Destination: Benzaitan’s second shrine.

5. Tsurugaoka Hachimangū Shrine is conveniently located approximately 200 meters from the JR Kamakura Station. Because the day was so nice, instead of taking a local train I opted to continue walking. The small shrine stood on a pond covered with water lilies, with a small bridge for crossing. It was a scenic place, and because the land area was so compact, this was the most well-attended shrine I had seen: there was actually a line to say prayers.

The gifts set before the goddess were mostly agricultural – lots of flowers and vegetables.

6. Hōkaiji (Hokaiji) Temple was located close by, honoring the god of treasure and patron of warriors – Bishamonten. It was away from the more congested tourist areas. The admission shack was unmanned, and after calling out softly a few times, the Japanese woman in front of me neatly arranged her three 100 yen coins on a plate and continued to the temple. I copied her, calling out a few tentative “Sumimasens” before placing arranging my own cluster of coins adjacent to hers.

I had gone but a few steps when a man appeared with a broom in hand, bowing and apologizing profusely as he collected the coins and gestured I should continue in. This was the first temple of the day that required shoe removal. I walked onto the tatami mats, lit incense, and sat down. It was a quiet, peaceful temple. I had been curious as to what offerings would be made to a god of war and treasure. There was the expected sake, of course, but also Pocky sweets and potato stick snacks.

The man who had accepted the coins at the entrance was clearly a top notch multi-tasker. It was he who put the sixth stamp on my board. Shortly thereafter, I saw him sweeping the steps as I left the temple. Five minutes later, I saw him again with gardening tools – that temple was very lovingly and carefully tended to.

7. It took less than five minutes to walk to Myōryūji (Myoryuji) Temple, which was simple and direct. The small outdoor statue Jurojin, god of wisdom and longevity, depicted an older bearded man with a deer. It seemed to be the custom to throw 1 yen coins so that they landed atop the deer’s head. I used my entire 1 yen coin collection in the attempt. No success.

The final site on my journey was Myōgonzan Hongakuji Temple. This temple was unique in that Ebisu is the only god of Japanese origin – the other gods were introduced to Japan by way of India and China. I slowed my pace for this Temple, wandering to admire the enormous bell and to light incense. Finally, I presented my pilgrim board and watched as the final stamp was placed.

Author’s Note / If You Go

I had an absolutely fantastic day, and an unforgettable experience. But unless you are in Japan for a long stay, I would gently discourage someone from trying to visit all eight sites in one day. Both Enoshima and Kamakura are amazing cultural treasures, and they should be savored. Do yourself a favor, and see Enoshima and Kamakura on separate days. Spend some quality time with the dragon of Enoshima.