Izumo – Land of the Gods 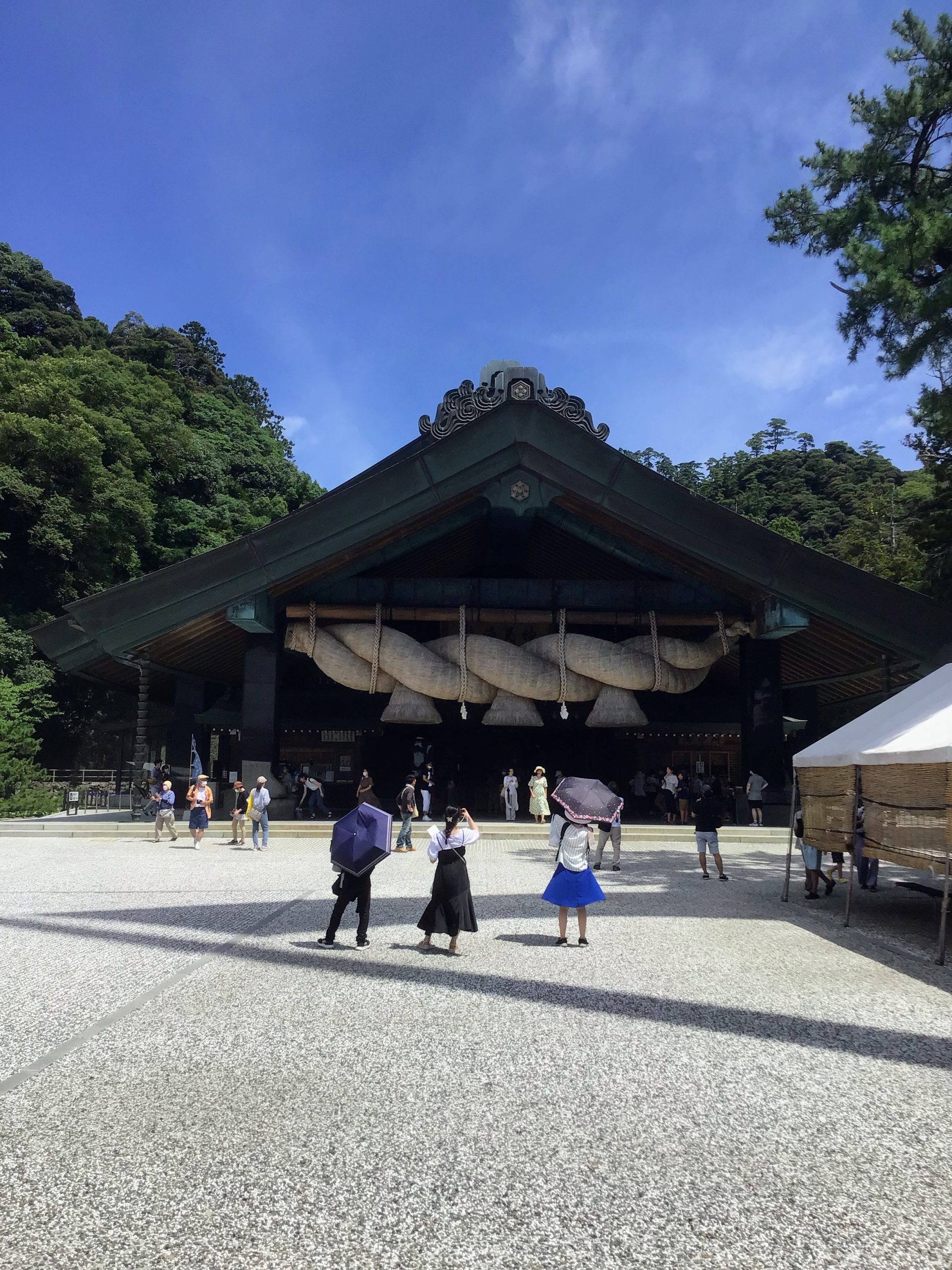 Izumo is an area known by the Japanese as being the “Land of the Gods”. Had it not been for my Sensei’s recommendation, I would never have made it here. And that would have been a shame.

As is the case with many countries, these lovely and culturally rich areas are often overlooked by foreigners looking for big cities and more “exciting” activities.

It was August when I traveled to this ancient Land of the Gods for a 4-day vacation.

Izumo Taisha is one of the three most sacred shrines in the Shinto religion. It is dedicated to Ōkuninushi, the god of happiness and the god said to have power over human relationships. For this reason, Izumo Taisha is place many Japanese go to pray for love, match-making, and their future soul mate.

This shrine is so special that, pre-pandemic, it regularly welcomed over 8 million visitors a year.

There was a long line queued up outside Izumo train station for the bus to the shrine. Based on the length of the line, I assumed everyone was headed to Izumo Taisha. As it turns out, the assumption was incorrect. Well over half the passengers disembarked at the mall.

It was uncommonly hot on the bus. I whipped out my plastic hand fan and began fanning myself and (by default) my seat mate, who shot me a quick grateful look. Everyone was relieved when the bus pulled to a stop across from a massive bronze Torii gate. Past the Torii gate a long, mercifully shady path led to the shrine.

At most shrines in Japan, the proper sequence for praying is:

Izumo Taisha is so special that the sequence is different from other Shinto shrines – here, you clap FOUR times.

Two are for you, two for your soulmate.

The Kagura-den (sacred music and dance hall) features the largest shimenawa (sacred straw rope) in Japan. At 13.5 meters long and a weight of five tons, it is required to be replaced every 4-5 years by Shimane artisans. The shimenawa is jaw-dropping – I have never seen a rope that thick or elaborate.

In another surprise, I was intrigued to see a few worshippers carrying plastic bags of dirt with them. Later, at Sogano Yashiro (an auxiliary shrine dedicated to the god of seas and storms), I observed that the space underneath the shrine had boxes of loose dirt and shovels.

It seems that many pilgrims gathered dirt from Inasa beach to mix with the dirt from Sogano Yashiro. After combining the sacred soils, they would sprinkle them outside in their garden to protect their house from evil.

I think I have prayed at at least a hundred shrines. The two animals I associate most with Shinto are the fox and the deer, since in Japan both are viewed as messengers of the gods. For this reason, I was surprised by the number of rabbit stone structures strewn throughout the grounds. There were stone rabbits in the most unexpected places and doing the most unexpected things: reading, on sailboats, bowing with their paws clasped together in prayer.

The abundance of rabbits is based on an ancient legend in which the god Ōkuninushi helped a rabbit god injured during a shark attack repair his fur.

After visiting Izumo Taisha I walked a mile to Inasa-no-Hama, the island where the gods are said to convene every October to discuss mortals’ fortunes and relationships.

The main road led directly to the island. I had expected that the beach would be crowded with visitors and there would be plenty of souvenir shops and restaurants leading up to the island. The beach itself was quiet. There was one restaurant in sight, and it was closed.

It was a reminder that this was far from a commercial district. This was a place where people lived, and a place that was sacred.

On the beach, directly across from the rock-island was an area that people would presumably observe ceremonies.

As it was low tide, I was able to touch the rock of the gods without my sneakers becoming wet. However, I had to toss my coin in the offering box and say my prayer very quickly to avoid an incoming wave.

Further out to sea, a family was playing in the rough surf.

Other than this family, there was no trace of activities one might expect at a beach. There was no swimming, surfing, kayaking; no sun bathers, fishing, or beach volleyball. I could not tell whether such activities were forbidden because of religious significance, or because it was simply too hot to be outdoors.

Indeed, it was so hot that I nixed my original plan to walk five miles to Hinomisaki to see Japan’s tallest lighthouse. Instead, I returned to the main street by Izumo Taisha.

The street was full of shops selling matcha tea confections, amulets, and Izumo soba. I found a shop that served Izumo soba, which is unique in that its noodles are served in three lacquered bowls. The cold noodles made from buckwheat seeds accompanied by grated daikon, nori (dried seaweed) and spring onions felt wonderfully refreshing.

With a happy, full belly I took a bus back to town and had a nice nap. I woke hungry and ready for dinner.

At the first restaurant I went, a server politely told the place was fully booked. I walked a block or so to another restaurant, where a friendly lady took my temperature and ushered me to a table separated by a bamboo partition. The place was so authentically Japanese that I could not read the menu placed before me.

The woman who had welcomed me so kindly relayed the options out loud. I caught enough words to understand a little.

Of note: as if it were not enough to be the land of the gods, Shimane prefecture is also known as being the “birthplace of sake”. It makes sense – at most famous shrines, there are offerings of sake on the table or barrels placed outside the shrine. The beverage is symbolic of abundance and a rich harvest.

The meal was delightful, a perfect combination of earth and sea.

On such a day, after such a meal, it is very easy to believe you are in the land of the gods.

Izumo is a good place to base yourself out of for multiple day trips. As one of Shinto’s most important shrines, Izumo Taisha is a must-see.

Matsue is the closest big city to Izumo, and has wonderful attractions to choose from, to include 17th century Matsue castle and an internationally ranked garden. The sunset on Lake Shinji is considered one of the best places in Japan to see sunset.

If you have two days, take an overnight trip from Izumo to Iwami Ginzan Silver Mine to see a wonderfully preserved Edo-period village. If you’re out over the weekend, stay in nearby Yunotsu to see a traditional Iwami Kagura performance, which are only held at the shrine on Saturday nights.

I’d like to make a strong case for visiting lesser-known areas in Japan. While there are not generally a long list of bucket list “things to do”, there is a treasure trove of things to experience. Come to Izumo – and Shimane prefecture – expecting to fall in love with a different side of Japan.

2 thoughts on “Izumo – Land of the Gods”