Checking Out Three Unique Temples and Shrines in Kamakura 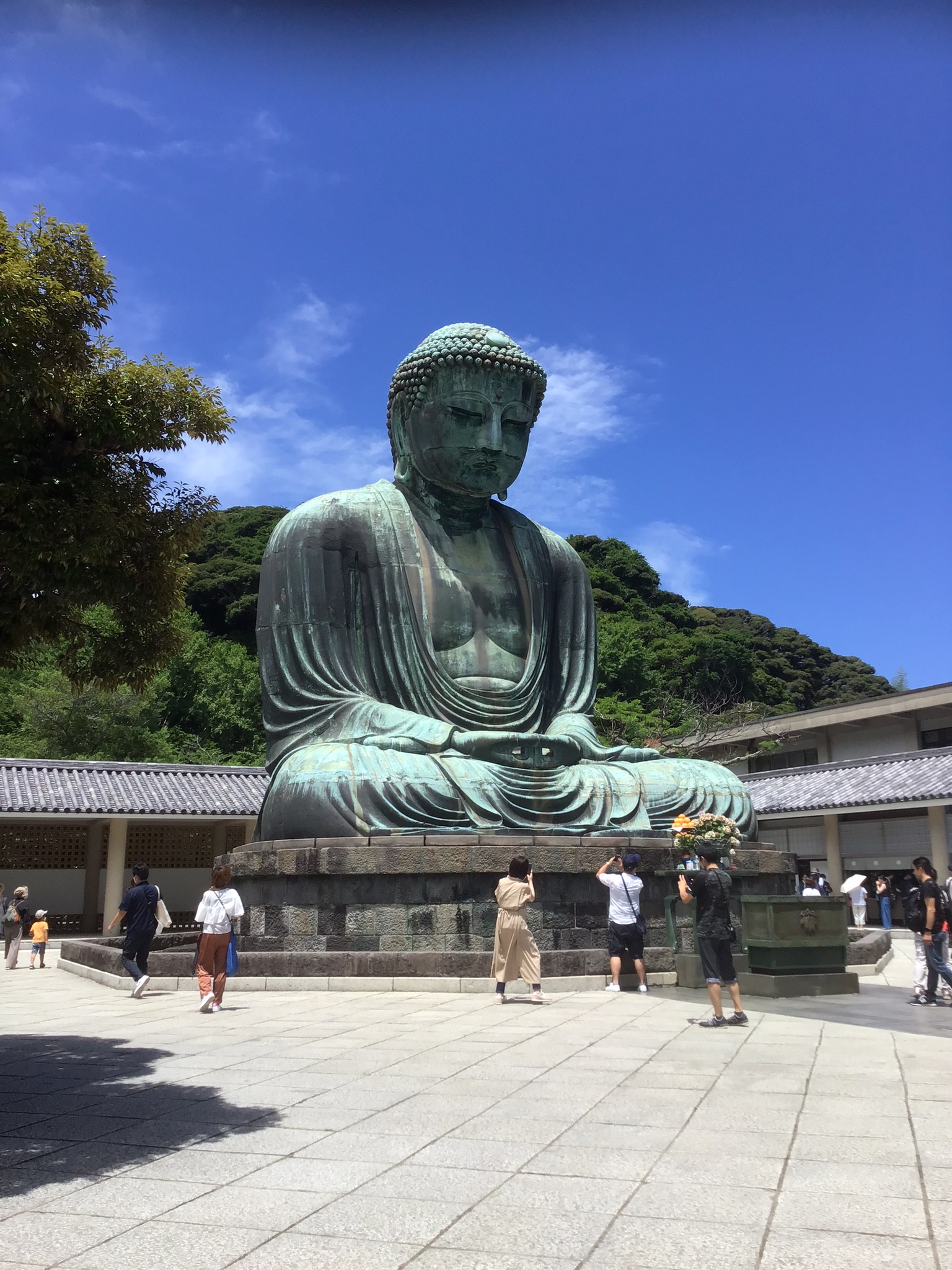 One hot Saturday in June, I decided to visit three of the most unique temples and shrines in Kamakura. In a town known for religious sites, it’s hard to choose.

Zeniarai Benzaiten – a shrine where you wash your money for luck.

I can’t believe I almost made the choice to stay home that Sunday. In my defense, Japan was experiencing a record-setting June heat wave. Only one day earlier parts of Japan hit 40.2 Celsius (104 Fahrenheit).

The temptation to stay indoors and drink cold tea was real. The only thing that forced me to leave the comfort of my apartment was the awareness that peak hydrangea blossoms are in June. If I wanted to see the hydrangeas at Meigetsu-in Temple, I needed to do it now.

Kamakura was Japan’s de facto capital from 1185-1333. Its beauty and easy access from Yokosuka make it one of my favorite places to visit.

My resolve wavered during the walk from my apartment to the train station. The short mile-long walk left my shirt soaked through.

Fortunately, at 5’9” I was taller than the majority of passengers, and so got to enjoy the benefit of the air conditioning coming from the train compartment ceiling. The trip to JR Kita-Kamakura station took less than 20 minutes.

The Famous Hydrangeas at Meigetu-in Temple

Meigetsu-in Temple was a short 10 minute walk from the station. I did not even have to break out a map. Hundreds of Japanese were also headed there, some with parasols, some with small portable electric fans. After paying the ¥500 entrance fee (roughly $3.70), I was allowed inside.

Given the high density of visitors navigating their way along the beautiful hydrangea blooms, everyone is very respectful of each others’ personal space.

In Japan, it is forbidden to take pictures inside a temple or shrine. Although the temples are lovely, so often it seems to me that the garden is the true star draw. That seemed the case today. The temple gardens provided a glorious place to pass an hour.

I re-traced my steps back to Kita-Kamakura and had a chuckle upon spying a parked jade-green car. Through the front window I saw seat covers depicting a Storm Trooper chatting with Darth Vader. The unexpected sight left me grinning for the entirety of the 1.5 kilometer walk to Zeniarai Benzaiten.

The walk quickly became uncomfortable. I suspect the primary reason Zeniarai Benzaiten is not more widely known is because, unlike some of the other places of worship, it is not on a flat path near a train station. It wasn’t so much the uphill climb that was rough as the fact the temperature was boiling, and the humidity made it difficult to breathe wearing a face mask.

The vast majority of Japanese wear face masks in high concentration areas or when indoors. However, if one breaks away from touristy areas and into residential, wooded, or agricultural areas, things change immediately. In an outdoor area, when climbing, biking, or running, Japanese had no problem shedding their masks.

Thus, I adjusted the position of my mask to a chin strap that I could quickly pull back up.

Happily, the route took me through Genjiyama Park. Although on a clear day you can see Mt. Fuji, today was no such day. It’s still a delightful place to walk.

While Migetsu-in Temple is arguably the temple most renowned for its hydrangeas, all of Genjiyama Park was erupting with blues, lavenders, whites, and pink blooms.

The entrance to a cave tunnel is framed by a white Torii Gate.

In 1185, in the Year of the Snake and the Month of the Snake, the god Ugafukujin delivered a divine message and spoke of a miraculous spring. Peace would come to those who travelled there to worship the gods of Shinto.

The spring waters from this shrine are said to be special. It was believed that those who spent money washed in these waters would find that it multiplied.

I resolved to test this idea out.

The cave tunnel was clean, bright, and cheerful, opening on the other end to a series of wooden Torii Gates.

I felt I had been transported to a magical world. To the right water gushed forth from the rocks in a waterfall. The Komainu, pairs of “lion dog” guards, were shaded by lavender hydrangea. Incense wafted from multiple areas as people lit small candles and burnt the incense packets.

There was a line formed in front of one of the shrines, and I waited my turn to say my prayers and toss my coin in. There’s a very specific procedure for praying at a shrine:

– Toss the coin into the slotted box.

– Say your prayer. (I tried to keep mine under 7 seconds)

– Bow one final time before turning.

I’m envious of the easy grace with which entire families can coordinate so that the movements are perfectly synchronized.

There are many things I admire about the Shinto and Buddhism, one being how graciously they welcome foreigners and those who know very little. There were perhaps ninety people at the shrine that afternoon, and I was very clearly the only Westerner. Yet no one asked me what business I had being there or told me to leave.

The cave with the spring water was to the immediate left of the shrine. After a few minutes of observation, I used one of the several ladles to pour water on the Yen note and coins in my basket. I swirled the water around several seconds and decided that the money was now nice and clean.

I dropped the basket off at one of the stations and left. As a Westerner, the idea of washing money was to me a novel concept. That novelty had been the primary draw. But what makes this shrine truly amazing is its location.

Coming through the tunnel cave, it is stunning to find so much beauty and tranquility.

My final stop of the day was some 2.5 kilometers away.

The Grand Buddha of Kamakura

The Daibetsu (Grand Buddha) is perhaps Kamakura’s most easily recognizable symbol. With the heat so intense, I thought it might be a good idea to hike through the shaded woods, which had a well-marked route, as opposed to the streets.

As I began hiking, an older Japanese man was descending the same trail. We exchanged “Konnichiwas”, and then he let forth a stream of Japanese. The only word I understood was the final word: “kiotskete”.

I might not have understood the words, but from the tone it had sounded like he was trying to warn me about something.

I realized the answer soon after. The path was deeply muddy, and had more than a few skid marks. As I rounded a corner I heard something unexpected and felt a momentary burst of elation that I understood the foreign conversation. And then I realized that it was not Japanese I was comprehending; it was Italian.

The two young Italians in front were navigating the mud with some difficulty. Both looked to be fit and healthy, and I saw immediately that the problem was the woman’s sandals. After so many months of not seeing a European in Japan, I was wildly curious as to what they were doing here.

They were surprised when I spoke to them in Italian and replied that they were university students who had arrived three months earlier. We wished each other well, and continued off.

The trail was generally well marked, however, when I saw two Japanese hikers I decided to double-check.

“Sumimasen. Daibetsu wa doko desu ka.” Excuse me. Where is the Grand Buddha?

I don’t know why it feels so satisfying being able to ask a question, when more often than not I don’t understand the answer.

The woman immediately sized me up and replied in English.

She and her companion were super fit, and moved with great confidence and athleticism over fallen tree branches and mud. She stopped a few times and turned around.

“Daijobou desu ka. (Are you okay?) Should we stop to take a break? Would you like to rest?”

I might have been pouring sweat, and my pants had more than a few mud splatters on them, but I had been proud that after six miles of walking, I had been matching her pace. When I replied that I felt subarashii (splendid/glorious/excellent) she grinned and the three of us pressed forward.

The dirt trek was steep enough in some areas that there were ropes and chains to assist. From there, it was a straight-forward path to Kamakura’s most famous temple.

A sign out front indicated that COVID protocols were still being strictly followed. I bought a ticket for ¥300 ($2.22) and entered. A sign atop the purification fountain requesting visitors skip the traditional step of rinsing their mouth was yet another reminder that things had not returned to pre-COVID normal.

I had first seen the Daibetsu when I arrived in Japan some eighteen months earlier. Now, as then, I felt humbled by my insignificance before the sheer size and majesty of the enormous 44-foot tall bronze Buddha.

That such a statue could have been conceived of and executed some 700+ years earlier brought a lump to my throat. Its neck and other parts had been reinforced after damages from earthquakes and storms. The halls that had originally housed it had been destroyed. There had been battles, typhoons, tsunami waves, and shifts in political power from city to city.

And this statue still stood, serene and peaceful.

I felt happy and exhausted as I said goodbye to the Daibetsu and asked Google to route me to the JR Kamakura train station. As is the case with almost every major place of worship, shops, restaurants, and food stalls had sprung up around the area. One could find rental kimonos, shop after shop selling shaved ice, sake, intricate woven bamboo baskets, porcelain. The delicious aroma of hot octopus crackers made my mouth water.

At seeing one sign I stopped so abruptly that those behind me slammed on their walking brakes too, and together we gawked at the sign. For ¥1000 ($7.40), an outdoor ticket machine dispensed 30 minute cuddling sessions with micro-pigs. Squinting, I could see tiny piglets snuggling against someone on the floor. It was adorable. I wanted to go inside.

And yet, filthy as I now was, I knew a session with the micro pigs would have to wait.