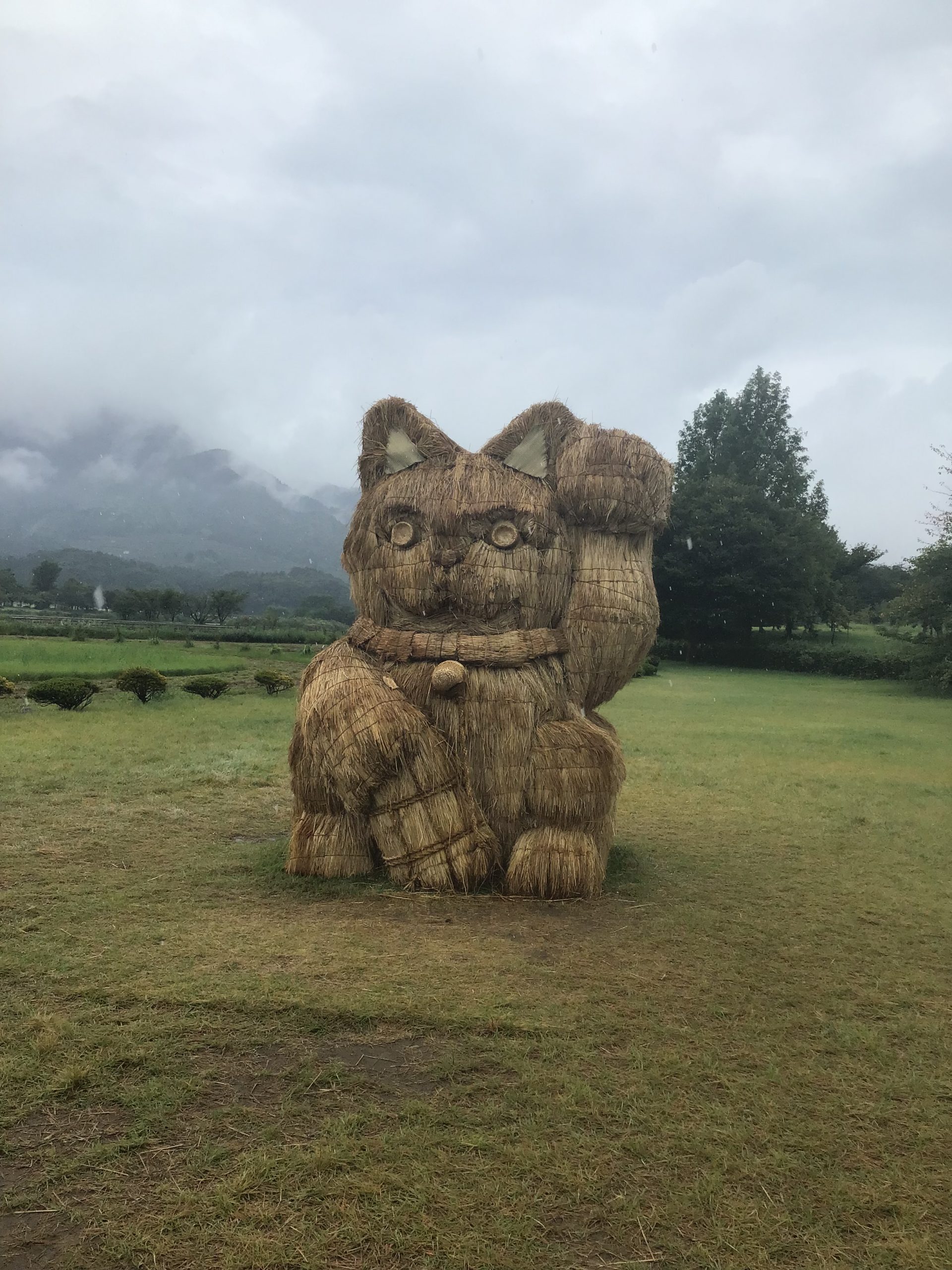 Niigata is Japan’s premier rice growing region. Every autumn, Nishikan Ward hosts the Wara Art Festival, an event that features creatures constructed entirely out of rice straw. Believe you me, it is AWESOME.

Niigata prefecture isn’t just tops in terms of rice production. The quality of Niigata’s rice is said to be the most flavorful and superior, its fields nourished from nutrients delivered via fresh mountain snowmelt.

Any visitor to Japan will be hard pressed to find a Japanese meal that does NOT feature rice as the key component of a dish. Rice is so critical to the Japanese diet that the word gohan doesn’t just mean “rice” – it also means “meal”.

As famous as Niigata’s rice is, the true draw for me was the chance to see the how artists created figures out of rice straw. I had studied the Wara Art Festival creations from years past, and was blown away by the size, imagination, and execution.

I journeyed to Niigata over Labor Day weekend bent on experiencing three rice-based events: 1) to see the festival, 2) check out the Niigata Rice Cracker Museum, and 3) sample that delicious rice-based brew: SAKE.

Wara is the Japanese word for “straw”. The idea for the festival began in 2006 as a means of preserving straw weaving skills. Japanese had traditionally used rice straw to create tools, shoes and baskets, and decorations. In addition, straw was used to make rope for ceremonial purposes. With modernization, fewer and fewer people knew how to continue the art.

Each year’s festival has a different theme. After the creatures are selected and designed, wooden skeletons are erected and the straw thatching begins. Updates on the progress are posted regularly on the Wara Art Festival’s official Facebook page.

Who doesn’t need a little joy in their life?

The three figures that the committee chose to illustrate joy were:

Getting to the Festival

Uwasekigata Park is a lovely, tranquil area, surrounded by beautiful hills and a large lake full of ducks and snow white egrets. In honor of the rice region, I purchased a set of onigiri from a vendor stall. The rice in the onigiri was indeed delicious.

After the tasty snack I set off in search of the main attraction. BAM – there they were.

I’m still trying to put a finger on why a festival with only three pieces should have such an impact. The figures were so artfully positioned that they seemed to have either sprung out of the earth, or been gently deposited there overnight by a benevolent deity.

Regardless, the effect is striking. Rumpelstiltskin might have turned straw to gold, but he had nothing on the local artisans.

The rain turned out to be a blessing. The ground might have been slightly muddy, but I had unobstructed views and could take pictures to my heart’s content.

Post-visit, I decided to walk back to the train station. As expected, the route took me along vibrant yellow-green rice fields. What was unexpected was how many other fruits, vegetables, and flowers farmers were able to coax from the earth.

I gawked at sunflowers that stood 12 feet high, persimmons, figs, eggplant, squash, and tomatoes. Everything about the small farms seemed to indicate a bountiful autumn harvest.

This was indeed fertile land.

Google lists the Rice Cracker Museum as a “theme park”. Alas, there are no roller coasters made of rice.

The museum was an easy 18 minute walk from the Niizaki train station. Long before I saw the factory buildings I could smell the intoxicating aroma of something wonderful.

Intriguingly, outside of the buildings stands the Bakauke Inari shrine – a shrine that is literally dedicated to the senbei (Japanese rice cracker).

Within the buildings, guests have the ability to view some of the process, and design their own bespoke rice cracker, ¥1200 (small) or 1500 (large).

I bought a ticket for the small cracker experience from a vending machine, and was handed a tray with a large brush, small container of soy sauce, small brush, rice cracker, and tongs. A staff member gently guided me toward a stove.

Although all instruction was delivered in Japanese, it was easy enough to understand what they wanted.

Step 1. Put the cracker on the hot stove, flipping frequently with the tongs. Humble brag: much to my delight, I am a goddess at flipping rice crackers.

Step 2. At an adjacent table, paint a design on your cracker using the small brush and soy sauce. There’s a series of designs on the table should you be in need of inspiration. Although I had originally intended to draw an aircraft carrier, I changed the design to a bird in a bow tie.

Step 3. Return to the stove and heat the cracker again. The design magically intensifies with the heat. Who knew soy sauce was such a potent ink?

Step 4. Remove the cracker and coat front and back with the remaining soy sauce using the big brush.

Step 5. Place the cracker on an air cooler grate and let cool for five minutes.

Step 6. Seal the cracker in clear plastic, and put in a cute box.

It goes to follow that a region known for its superior rice would make exceptional sake. Thus, the final stop of the day was at Ponshukan Niigata station for a sake tasting.

What is unique about Ponshukan is that guests can choose to sample sake from over 100 vending machines. There’s an entire wall is dedicated to sake sourced from throughout the region.

What an original concept.

I traveled through the store to reach the tasting room at the rear. After paying the ¥500 fee, I was handed six gold coins and a tiny sake cup. (I think you are supposed to get five gold coins, but the man was being super nice.)

It’s a simple process: you place the tiny cup in a slot specifically designed to hold the cup in place and insert your gold coin in the machine. When the light comes on, you press the yellow button and sake is dispensed.

Each machine has a description in Japanese and English that states where the sake was produced and when the brewery was established. The machine also displays notes on the sake’s dryness, aroma, and alcohol concentration.

Thus, I discovered three things: 1) I like sake on the dry side. 2) Niigata sake does the rice region justice. 3) Six samples is more than enough!

For the festival: The Wara Art Festival is held annually from the end of August to the end of October. Although it takes some effort to get to, once there, it is FREE.

Because the sculptures are located in a field and weather can be temperamental, it’s best to wear boots or shoes that you don’t mind getting dirty.

For the museum: The Rice Cracker Museum is best suited for those who like rice crackers, or those who want to design a fun keepsake. Caution – that stove is HOT! For that reason, this isn’t an activity for small children.

Vending machine sake: I really enjoyed tasting so many different types of sake. But even though the cup is tiny, at 16% alcohol, sake PACKS A MIGHTY PUNCH. Have fun, but BE CAREFUL.

Here’s wishing you an excellent adventure!

This page contains travel-related affiliate links. If you choose to make a purchase from these links, I may receive a commission at no extra cost to you.