Nokogiriyama and an Encounter With Chiba’s Great Stone Buddha 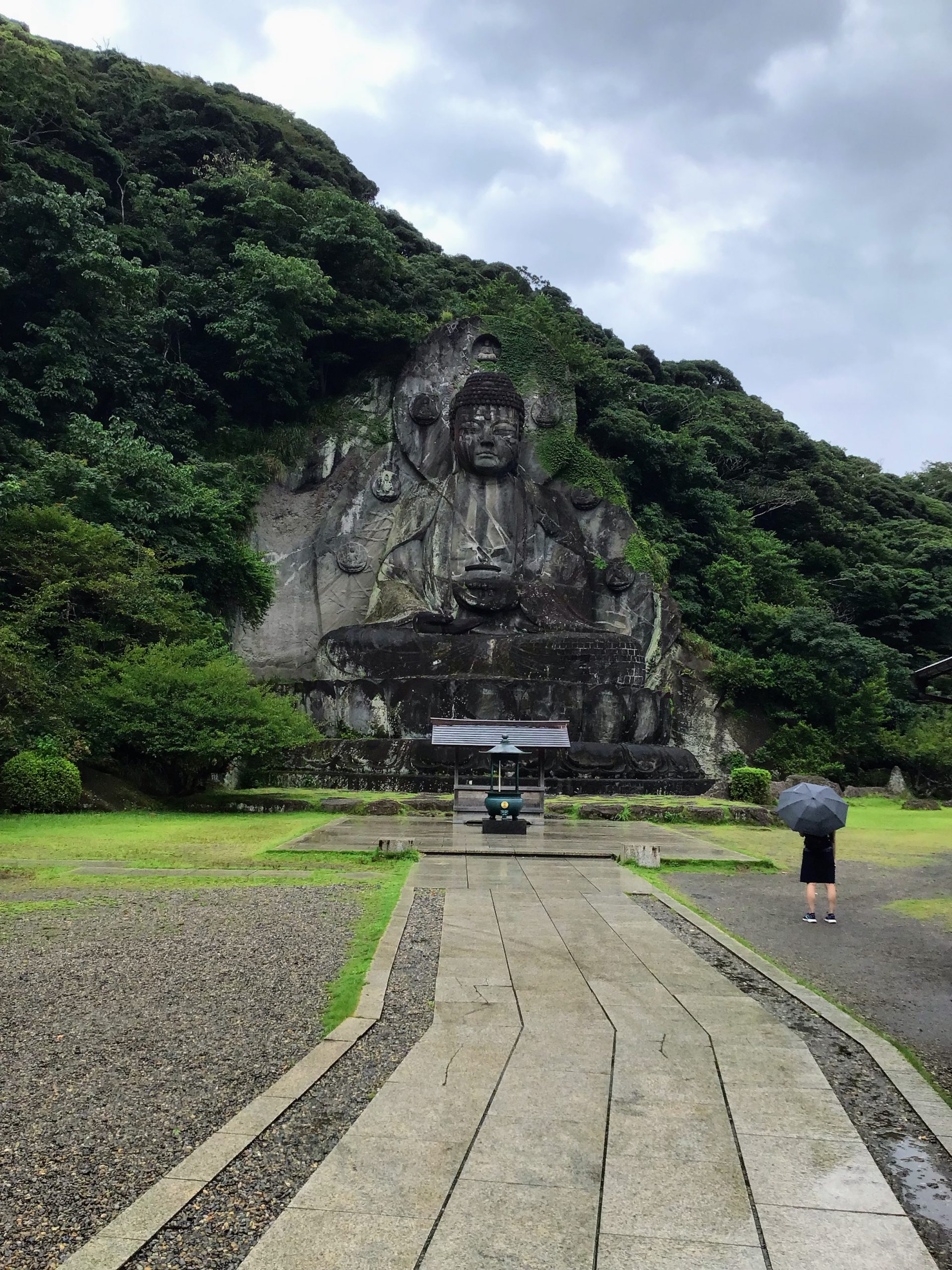 The journey from Yokosuka to Nokogiriyama (Mt. Nokogiri), home of Chiba Prefecture’s great stone Buddha, is one of THE best day trips you can make.

Nokogiriyma and Japan’s largest Buddha statue are not Chiba Prefecture’s most well-known attraction. That would be Tokyo Disneyland.

And while I count myself a Disney fan, there is SO MUCH more to see.

The first Buddhist temple at Nokogiriyma was commissioned over 1300 years ago. The name literally translates to “Sawtooth Mountain”, so called because of the mountain’s jagged features and history as a stone quarry.

On the Sunday my friend and I set out, the late August sky was overcast with scattered rainstorms. Fortunately, the rain worked in our favor. Not only were there no crowds, the temperature and breezes were perfect for hiking.

For ¥500, cable cars transport visitors from the base to the top of the 330 meter mountain. However, we had agreed beforehand that we wanted to visit the temple the way it had been intended: by foot.

It’s easy to access Chiba prefecture from Yokosuka. Forty-minute ferry rides make the journey from Kurihama Port to Chiba hourly. The fare is also reasonably priced – ¥1600 ($11.50) for a round-trip ticket.

While waiting for the ferry, we spied an adorable group ofJapanese adventurers who looked to be in their 70s/80s. The group looked as though they met up to hike on a regular basis. Each was in superb shape, and they uniformly sporting backpacks, hats, and paper maps.

There must also be some wicked good golf courses on the other side, because aboard the ferry are racks designated specifically for golf bags. We were amused by the number of passengers drinking Asahis (cans of Japanese Beer).

The winds and rain had given Tokyo Bay some light chop, though not enough to cause anyone motion sickness. As the ferry pulled in we admired Chiba’s clear waters and palm tree-lined harbor.

Once ashore, we used the map app off my friend’s phone and followed a path that mirrored the coastline. We were a little alarmed when the sidewalks on either side disappeared and we entered a series of tunnels.

The signs above the tunnels warned drivers to be on the lookout for bicyclists and pedestrians, and so we had imagined a wider space to walk.

Instead, there were perhaps 18-24″ of clearance separating the tunnel wall from vehicular traffic. Interestingly, there are segments of the tunnel that opened up to beautiful views of the ocean. However, a few meters later they then re-direct the walker back inside the tunnel.

Let me be unequivocal – I cannot recommend that route to anyone!!!

My friend and I have had some crazy adventures together. We walked 28 miles from Yokosuka to Tokyo, and hiked from sea level to the top of Mt. Fuji. Nothing left me as rattled, white-knuckled or shaking as hugging the tunnel wall with cars zipping past.

Once we cleared the tunnels, we followed a smooth, steep ascent up Nokogiriyama to the ticket booth.

There, we purchased ¥700 tickets to Nihonji Temple.

Given the cultural and religious significance of this lovely temple, one might be surprised there are so few visitors. On any given day, Kamakura’s Kotoku-in Temple is far more crowded.

I think the primary reason relatively few come to Nokogiriyama is due to the sheer physicality of the mountain. Whereas Kamakura’s Daibetsu (Great Buddha) is located in a relatively flat area of the city, Nihonji Temple is all about the climbing.

When the lengthy sets of stairs eventually open up to a view of the Stone Buddha, you feel you’ve earned it.

With a height of 31.05 meters (101.8 feet), the hand-carved structure in 1783, this is the largest Buddha Statue in Japan. The statue was painstakingly restored in 1966 following damage due to earthquakes, time, and erosion.

This Buddha holds a medicine pot in hand – he is there to heal.

The Spiritual Guardians of Nokogiriyama

Near the Great Buddha is a statue of Jizo Bosatsu, guardian of children and travelers. The Jizo Bosatsu stands before thousands of miniature Jizos piled behind. At a nearby stand, visitors can purchase a tiny Jizo figurine for ¥500 ($3.59). They can choose to either take the Jizo home, or to write their name on the back, and leave the tiny Jizo (and their wish) by the main statue.

Beyond the Buddha, another hike takes visitors past 1500 Tokai Arhats. I thought the statues, which show a wonderful variety of poses and expressions, were very similar to the 500 stone statues at the Rakanji Temple near the Iwami Ginzan Silver Mine. It makes sense that the stone figures should be similar in style – the temples were constructed within a decade of each other.

The main difference was that the Tokai Arhats at Nihonji Temple are outdoors, as opposed to being behind cave enclosures. Visitors are therefore allowed to photograph them.

Sadly, a good portion of the Tokai Arhats have been destroyed or damaged. Some of the damage was due to nature and time. And some – where it is obvious the statue was beheaded – was due to anti-Buddhist movements during the Meiji Restoration.

A Japanese father with a baby strapped to his chest and a small boy by his side reached the top of the mountain. At the pinnacle, they both threw their arms out and roared together in triumph. It was a very sweet father-son moment.

One of the mountain’s most scenic areas is a site known as “hell lookout”. The view offers a stunning look at Tokyo Harbor and the gorgeous forest below. The area also serves as a popular place to get your own photo taken. (If you want the “look-at-me” angle, it’s best to have a companion on the adjacent cliff take your picture.) Most people don’t appreciate how sharply the cliff juts until they see the photo.

After admiring the beauty, we located the trail for the Hyaku-Shaku Kannon.

I cannot be the only one who walks the trail there feeling like they in an 80s-style adventure movie. The route takes you through walls of carved mountain before revealing the 30-meter (100 foot) carving of the Buddhist Goddess of Mercy.

The sense of wonder and discovery was heightened by the realization that we were the only ones there.

Kanto-Kureainomichi Trail and a Seafood Feast

We had planned on taking the cable car down. However, the first trail sign we came across revealed we had somehow overshot it. Rather than climb back up, we decided to simply follow the trail down.

The steps are steep, uneven, slippery from earlier rainstorms, the path narrow.

It was also a stunningly beautiful trail, replete with wild mushrooms and the lovely fragrances of honeysuckle and moss.

When it comes to exercise, you are guaranteed a PHENOMENAL cardio and leg workout. Indeed, the physicality of this particular trail is such that during the entire descent, we came across only one other hiker.

Eventually, the trail left the forest and took us through a quiet neighborhood. Judging from the signs, it seemed some were able to generating income by renting parking space to hikers.

By now, we were both ravenous and looking forward to feasting on seafood. Much to our surprise, at 2:30 p.m. the restaurants lining the waterfront were still at capacity, the lines well outside the door. We passed at least seven full restaurants before finding one with a line of only two.

The dishes arrived – an exquisite pairing of uber fresh sushi and cold sake.

It was just the meal to make two hikers happy!

Had enough of city traffic and crowds? Nokogiriyma is the place to go for a lovely breather.

There’s a good reason why this destination is so popular with urban Tokyo dwellers. It’s a wonderful area famous for an abundance of nature hikes.

The same reason more people don’t go is because it is full of nature – of stones, falling rocks, mud, bugs, and all kinds of wildlife.

From Yokosuka – the quickest, most efficient way is to take the ferry departing from Kurihama Port. JR Kurihama Station or Keikyu Kurihama.

Once at the port, you have the option of either purchasing passenger tickets or driving your vehicle aboard the ferry. Be sure to hold on to your ticket: the Japanese inspect it as you board and AGAIN as you depart.

Once in Chiba, do NOT follow ANY walking/biking route that hugs the coast or takes you through a tunnel. The only way to safely get through the tunnels is by vehicle.

If you don’t have a car:

Option 2: (For the super fit, with no mobility issues) Take the Kanto-Kureainomichi trail. Be forewarned that it involves a steep climb on uneven steps, dirt, tree roots. Make sure you hydrate and carry extra water. There are no vending machines until you reach the Daibetsu. There is, however a very clean bathroom on the trail.

Please be mindful that certain segments are narrow, and that only one hiker at a time can pass. Because there are not many “shoulder” areas to turn around, once you start, you are all but locked in.

Safe and happy travels to you!