Participating in a Summer Purification Ritual in Takayama 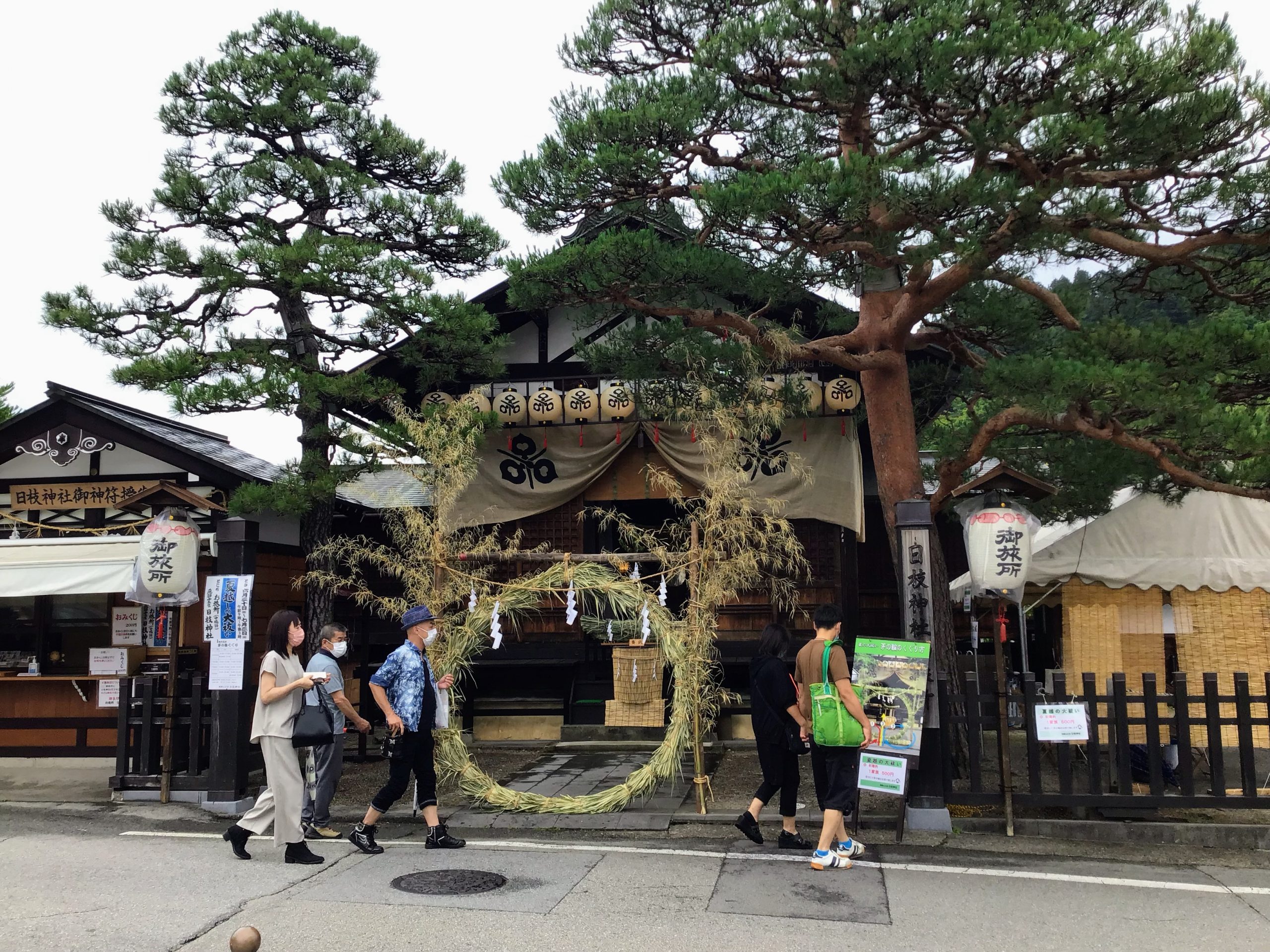 I had not planned on participating in a summer purification ritual. I had been trying to find my way out of Shiroyama Park forest, alarmed by the multiple bear warning signs and ravenous after a four mile hike.

Instead of being on the Higashiyama Walking Course – where I was supposed to be – I had crossed the red Nakabashi Bridge and wound up at a shrine.

Which is how I now found myself holding a paper offering and following the excellent verbal direction from a young Japanese woman. She guided me through the enormous ceremonial grass hoop in a figure eight pattern.

Hidari. Through the hoop, and to the left.

Migii. Through the hoop again, and to the right.

Through the hoop for a final third pass and straight to the shrine. Here, the young lady ran up to assist and indicated I should place my white sheet inside an intricately constructed bamboo boat.

The Chinowa-Kuguri or Nagoshi no Harae “summer passing purification ceremony” ritual occurs twice a year in Japan: in June/July, and again in December. The tradition first began during the Nara period (710-794) and is based on the story of Somin Shorai.

Although a poor man, Somin Shorai opened his home to a traveler looking for a place to stay. The traveler turned out to be the god Susanno-no-Mikoto. Because Somin Shorai wore the grass chinowa the god had taught him to make, he was protected when a terrible plague swept through the region.

Performing this ritual was designed to restore energy that had been sapped due to summer heat, to mark the end of six months, and to protect from pandemics.

The temperatures the last two days had remained firmly in the mid-90s. Most of Japan was in a record breaking heatwave.

And then, of course, there was COVID 19. The vast majority of Japanese continued to wear face masks in public, particularly in confined spaces. (However, outside of high-traffic areas, or when engaged in outdoor physical activity, I saw that many were starting to relax their mask-wearing.)

It was the perfect time for a purification ritual.

Of course, I knew nothing about Chinowa-Kuguri at the time. I had simply crossed the street wondering where the music was coming from and what the big grass hoop was for. The next thing I knew, I was seated in a chair across from a masked man as he handed me a sheet.

I understood enough Japanese to know I was to write my family name. The romaji letters looked out of place among the other characters. He then handed me a small piece of paper that looked like a shirt and (I thought) told me to write the names of my family and their ages.

I starting writing names of my parents and siblings and heard a soft chuckle. Japan had a negative birthrate, and here I was dropping enough names for three families.

My brow furrowed as I tried to remember everyone’s ages.

As anyone who has participated in Chinowa Kuguri can tell you, I had messed up. What he had actually told me to do had been to write my family name (last name), not the names of my immediate family members.

By writing my name and age on the paper and then blowing on it, I was supposed to have transferred my sins to the doll. Goodness knows what mischief my mistake caused.

In my defense, I am still learning Japanese.

In Japan, an incredible amount of kindness and generosity of spirit is extended to strangers. I had heard the music, seen the grass hoop, been curious as to what was going on, and they had welcomed me to an event I very clearly knew nothing about. That I was dirty, wearing shorts, and literally dripping with sweat had not seemed to matter.

Perhaps they had been curious as to why I looked so rough.

Back to those bears…

I had been attempting the Higashiyama Walking Course based on the English map I’d picked up at the Takayama train station. The 5.5 kilometer (3.3 mile) path passed by temples, shrines, and cemeteries, and then across the Enagawa River before steeply ascending up Shiroyama Park. It was an excellent cardio workout.

On the map, I had thought that Shiroyama Park would be akin to a garden. No. This was a wooded hike. All the trails were fabulously maintained and fastidiously signposted. Since there was no one else there, I removed my face mask and let me say: those woods smelt fantastic.

I was throughly enjoying this Sunday morning nature walk.

And then I saw it. My eyes widened.

I did not need to read the sign to know what the stick and pot were for. I picked up the stick and struck the pot repeatedly. The sound was much louder than anticipated.

During a trip to Nikko several months ago with some colleagues, we had heard a few of the Japanese hikers emitting a light jingle. As they overtook us, we noted that they had tiny strings of bells wrapped across their torsos. We had speculated as to whether the bells were for a religious or ceremonial occasion, or whether they were just an especially happy group of hikers. None of the above.

We soon came across a bell off to the side of the trail with a sign in English advising hikers to alert the regional bears to their presence.

One always hopes that in the event misfortune happens, one has the courage to face it heroically. Instead, I had made careful assessments of my companions’ fitness in the event we had to sprint. They would later admit to having done the same with me: its never good to be the slowest person in a group.

The problem now was that I was hiking alone, with the last human I had seen having been some forty minutes ago. As soon as I saw that pot I questioned whether the possibility of bears and the continued light rain made it foolish to continue.

Determination to find the old Takashima castle ruins won out. My reasoning was that Japanese bears were polite, and I had given ample notification I was in the area; it would all be fine. Nonetheless, as a precautionary measure I kept my umbrella in a fencing position. Approximately two hundred vertical meters from my destination I found another warning area, and this one alarmed me.

The pot was missing!

I scurried up to the ancient ruins, took two pictures, and then booked it for the nearest path down.

I had all kinds of thoughts as to why that pot should be missing. Maintenance, human prank, bear prank…

It’s the bear prank hypothesis I like the most. Somewhere up in Shiroyama Park there is a bear having a good laugh and banging that pot.

Note: There are many lovely places to visit in Takayama.

The Higashiyama Walking Course is fairly physical, involving a lot of stair climbing for the shrines and temples, and a steep ascent if you want to explore the park trails.

It did not look like the shrines, temples, or cemeteries on this historic path receive many visitors. That’s a shame, because so many of them have fascinating details. For example, the main hall of Shoren-ji Temple was said to have been built out of one cedar tree around 1500. Unfortunately, all shrines appeared to be locked, though one could freely roam the grounds.

The Higashiyama Walking Course is best suited for someone who is both active and who is interested or has good knowledge of Japanese history.

It had been foolish to underestimate how much exertion was required in the heat. Should you visit Takayama in the summer, make sure you hydrate well.