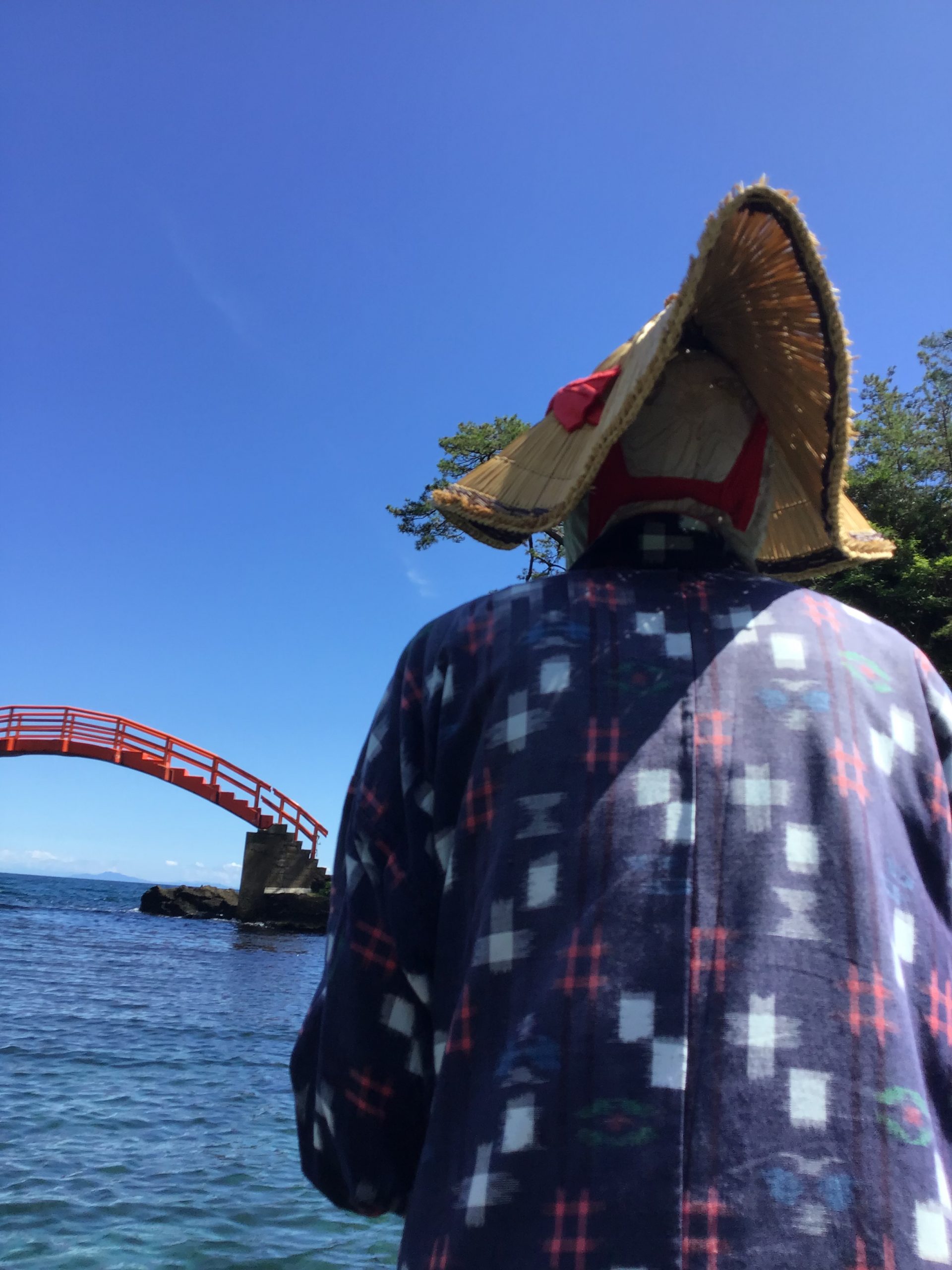 Sado Island is many things. For centuries, it was an island of exile. Later, it became famous for gold and silver. Above all, it’s a place of beauty.

At 330 square miles, Sado Island is Japan’s second largest island after Okinawa. One of its principal charms is that it is truly remote.

It is also very sparsely populated: the most recent 2022 census revealed a population of under 50,000.

Unlike two of my favorite islands, Enoshima or Jogashima, because of its size, there are long distances between Sado Island tourist attractions. Website after website reported that bus transportation was infrequent, and strongly recommended that the best way to explore the island was by car. I gulped and hired a tour with a government certified tour guide.

At 4 p.m. the day before, I learned the guide had to cancel. Although more than a little nervous, I was determined to go anyway.

Sado Island has a long history as an island of exile.

Nowadays, its a place people happily travel to for vacation.

I woke at 5 a.m. and took a taxi to Niigata port to catch the 6 a.m. ferry. At the terminal, I purchased a 2nd class ticket for the 2.5 hour, 32 mile journey across the Sea of Japan.

As I boarded the ferry I made a major social faux pas. Second class ticket holders have the option of lying down on designated carpeted areas. I was so excited I walked up to the window to take pictures. Turning, I caught stares from my fellow passengers. It was then that I realized with horror that I had broken a cardinal rule in Japan.

As a Sailor, I found the carpeted floor very comfortable. Blankets were available to rent for ¥100 ($.070). Beyond being super clean, the ferry is also family friendly, and there are designated rooms designed just for children.

I was intrigued by the welcome banner after the ferry docked at Ryotsu Port. The image showed two iconic figures holding…bottles of hand sanitizer. Tourist areas that met cleanliness standards would be given Sado Clean Certification stickers.

It’s the first town I’ve been to with a tourism campaign built around cleanliness.

The banner notwithstanding, Sado Island gives off a very relaxed vibe.

So relaxed, in fact, that I decided that with only a few hours to explore, I should book a taxi. A sign outside the taxi waiting area displayed fares for sample routes. My desired itinerary did not fit any of the suggested routes, so a taxi driver and I brokered an on-the-spot agreement.

My Japanese is still very basic, and he spoke no English. The only thing I was able to successfully communicate was that I would like to go to the Sado Kinzan Gold Mine, a 50 minute drive from the port.

En route, he pulled up alongside a pastry shop and motioned for me to stay inside. When he returned, he passed back a bag of sweet confections. They resembled pancakes and were filled with sweet red beans.

I was deeply moved by his generosity. Given the seriousness Japanese place on cleanliness, it is a big deal to eat in someone’s car. I had not said a word about being hungry (I was famished) – he was simply naturally thoughtful.

The visuals of robots performing a range of tasks in Sodayu tunnel added a surprising touch to the experience. The sensation is uncannily like the Pirates of the Carribean ride. Given the conditions of the cold, wet tunnel, it is impressive that the robots functioned perfectly.

Thousands of coins covered the floors of the exhibit areas. On closer inspection, I saw a sign stating all coins would be donated to an April ceremony for unregistered people. Another sign stated that the government had forcibly brought unregistered people to labor in the mines as drainage workers.

Try and Lift the Gold Bar

The tour route includes a visit to a small museum, and a rather unique challenge. In one room is a gold bar encased in glass. Visitors are invited to reach for the gold bar via a small opening and remove the bar within 30 seconds.

An adjacent sign notes that if successful, the prize is not the bar itself, but a serialized gold card.

It was heavy. I was super proud I could lift it, and even more proud when several Japanese turned to observe my technique.

Alas, the problem was I lacked the strength to sustain the angle needed to draw it out.

Therein lies the challenge. A small hand can fit through the hole much easier. A strong, bulky hand might have an easier time maneuvering the block but would have a harder time withdrawing both it and the gold bar.

The final stop at the mine was the well-equipped gift shop.

I bought a few boxes of gold-flaked sweets for my colleagues.

Granted, the tarai bune look about as stable and seaworthy as a teacup. The unique design dates back to the 1860s, when they were used by locals to navigate narrow channels and catch abalone.

An older woman wearing a lightweight tunic and a straw hat adorned with a red bow met me by the tub boats.

The boat was surprisingly stable, with a glass bottom panel revealing waters so wonderfully transparent I could see straight to the bottom.

The water was the loveliest shade of jade. Although the waters of the small harbor were tranquil, just beyond the rocks the sapphire blue ocean showed a strong current.

The woman pointed out a variety of fish. I recognized two words: “Fugo” (puffer fish) and “suica” (watermelon).

I could easily see the puffer fish, but thought I might have misheard about the watermelon. The woman gestured again.

Floating in the water were remnants of a watermelon strung from a pole. The fish had picked it clean except for the rind.

The next stop in the adventure was Shukunegi.

Many locals had shown up in support a bike competition around the island. There had to have been at least a few hundred bikers out that morning. Taiko drummers, women waving fans, locals observing from chairs with beverages in hand.

The hills made for an extreme workout. At the same time, cyclists were treated to views of great beauty and the brilliance of rice fields set against deep blue ocean.

I would later learn from a Japanese friend who happens to be an avid endurance cyclist that Sado Island is considered a dream cycling destination. The Sado-Ichi course is a 202.5 kilometer beast that hugs the entire coast.

Once at Shukunegi, my driver indicated he wanted to take me through the village himself. In the parking lot we were very politely requested to deposit ¥100 ($.070) in a box, with contributions going to support the preservation.

I enjoyed the quick tour of the old fishing village. The most famous of the buildings is a tiangular-shaped house that had been built to fit the triangular plot. The shape reminded me of a head-on profile of a ship.

As it turns out, the old historical wood houses had been constructed from recycled ship planks.

My kind driver had me back at the harbor by 2 p.m.

I bowed and said my best “Arrigato gozaimasu”.

He waved a hand in farewell.

”Thank you very much. I love you.”

I was startled by the words, which he delivered with jovial humor. In our five hours together, these were the first English words he had spoken.

He had been so proud to show off his island, and could not have been more generous or hospitable.

Should you go by jet foil or car ferry? The three determining factors will probably come down to time, novelty, and cost.

My round-trip 2nd class ferry ticket came to ¥6200 ($43.03), half the cost of the jet foil. If lying on carpet is not for you (I loved it and had an awesome nap) then rest assured, 2nd class passengers also have access to very comfortable seats.

Take lots of cash! There are so few places for foreigners to withdraw cash that Lawson’s (known for having ATMs) are marked on the tourist maps.

For leisurely exploration, I’d recommend going by car. If you don’t feel like taking your car on the ferry, there are several car rental agencies just outside the terminal.

One of the things I was grabbed at the ferry souvenir shops was a bottle of Hokusetsu sake. Sado Island’s Hokusetsu Sake Brewery was established in 1871 and is known for mellowing their sake using a special music room. The founder of the Nobu restaurants found the quality to be so impressive Nobu obtained exclusive rights to sell Hokusetsu sake in the U.S.

Grab a bottle from the island itself, and you can celebrate like a multi-millionaire, celebrity, or socialite for a fraction of the cost.

I’m saving it for a special occasion.

The Ferry Terminal and Ferry