The Beautiful Ama Divers, Pearls and Treasures of Mie Prefecture 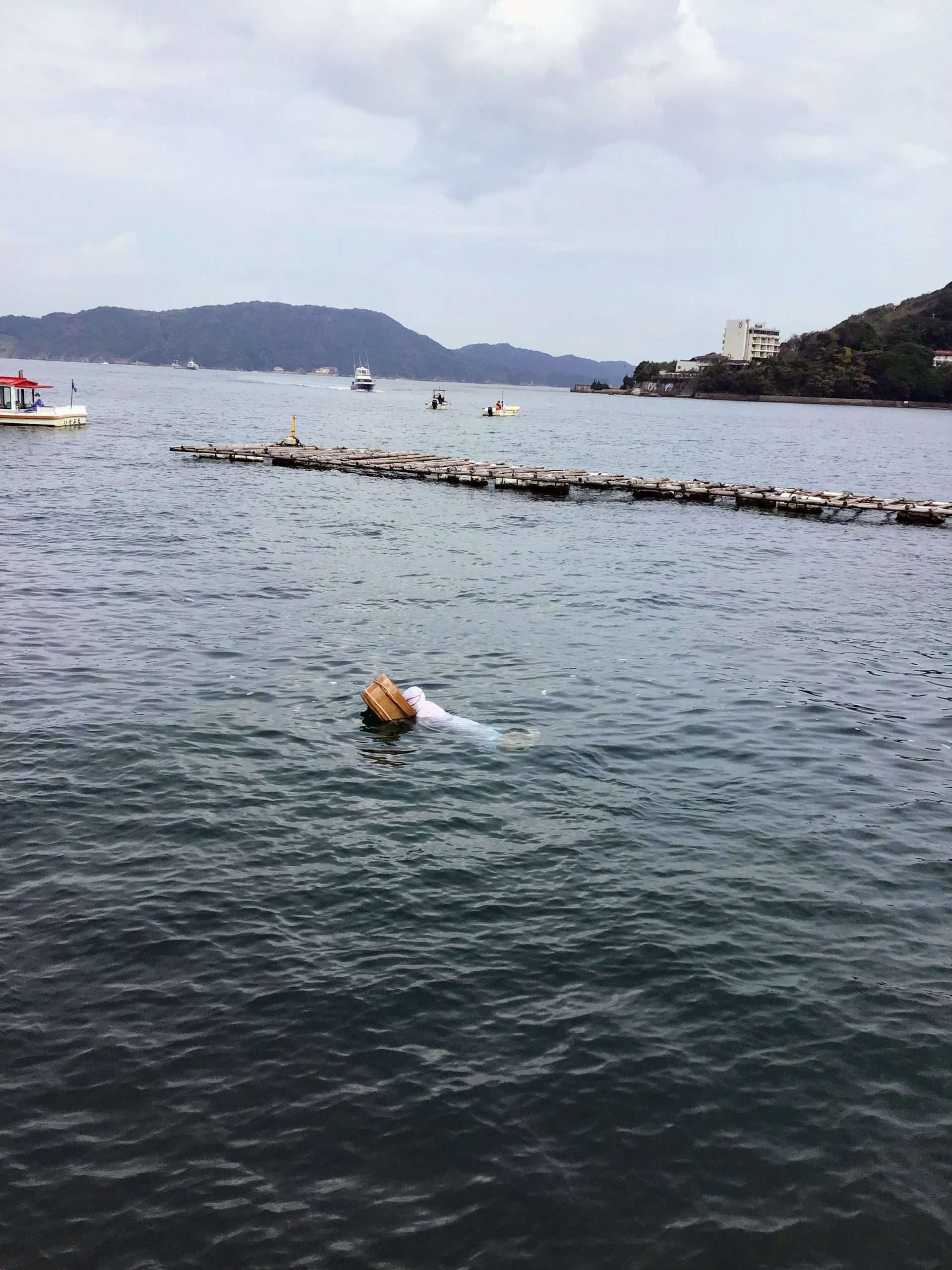 I snuck out of my overnight rental apartment in Osaka early one Sunday morning, eager to see Mie Prefecture and the famous Ama divers.

According to statistics gathered by the World Tourism Organization, the average international tourist who comes to Japan spends just under 8 days. With a very limited time, such travelers are most likely to visit Tokyo, Osaka, and Kyoto. It takes a special effort to get to Mie Prefecture. As with many things in life, the effort to get to this less-visited destination is richly rewarded.

Mie Prefecture prefecture is home to the Ise Grand Shrine, one of the most sacred shrines in the Shinto religion. It is also famous for its association with the Ama (“sea women”) divers. Furthermore, it was at Mie that the first cultured pearls were created by Kokichi Mikimoto in 1893.

I took a Vista Express train from Osaka’s Tsuruhashi station to Toba. Although there was a noticeable uptick in tourism and the local trains near Osaka were mostly standing room, it was apparent Mie had not yet received the same tourism spike. There were only three people in the immaculate and luxuriously appointed train compartment. Two hours later, I exited the train station to the sight of locals fishing along a peaceful boardwalk.

Historically, the Ama traditionally dove for seafood that resided near the bottom of shallow waters, such as abalone and clams. In the late 19th and 20th century, the Ama dove for pearls.

This tradition and profession has declined sharply over the decades due to modern methods of obtaining seafood and pearls. Although the Ama can be found at seaside communities in Mie Prefecture, Toba boasts the highest concentration of Ama divers: 140.

The tradition of the Ama historically centered on women. The skilled ladies dove an average of 20 feet, with the ability to go upwards of 50 feet. It was, and remains, dangerous work. There is always the possibility of dangerous marine wildlife, currents, storms, underwater obstructions, and hypothermia. The Ama wear amulets with symbols designed to protect them, and routinely pray at shrines both pre- and post- dive. Given the physicality of the work, it may come as a surprise that many Ama continue to dive well into their 70s, hearty and strong.

I had hoped to have a chance to meet the Ama and have lunch with them in their traditional huts. The Toba tourism office regretfully informed me that all the experiences with the Ama had been booked. Disappointed, but still hoping to see them dive, I purchased a ticket and walked across an enclosed bridge to Mikimoto Pearl Island.

I joined the other visitors by the observation platform, already feeling decadent and guilty over my warm fleece jacket.

A small boat bearing two women in traditional snow white clothing slowly made its way in front of the platform. Clad only in their white attire, the women looked like priestesses as they waved and then formally bowed. Each then dropped a large wooden bucket with a long rope affixed to it into the water and then neatly jumped in after it. They disappeared and re-emerged 17 seconds later with a shell in hand, which they displayed and then placed in the bucket.

I was intrigued by the whistling sound of their breathing technique between dives. After about six dives, they tidily rolled their rope around the bucket and climbed back aboard the boat. More than anything, I was in awe over their stoicism – there hadn’t been so much as a shiver.

Like many women, I’ve associated a strand of pearls with class and elegance since I was a child. Later, as a Sailor, I loved pearls because they came from the seas I sailed over.

It was Kokichi Mikimoto who devised a way to create that which existed in nature. The “Pearl King” viewed cultured pearls as an important icon of Japan, and made it his life’s work to showcase pearls to the world. He’s honored with multiple statues, both on the island and outside the train station.

Mikimoto Pearl Island has an excellent museum dedicated to the history of pearls, and the art and science that goes into creating a perfect strand. The surgical tools on display resembled a doctor’s kit. Indeed, the process by which the oysters are implanted with is referred to as “an operation”. One of the most interesting facts I took away is that the round beads that are inserted into the oyster come from freshwater mussels.

And those come…from the Mississippi River.

I have a newfound respect for cultured pearls. It’s a collaboration. An exercise of patience and time. A gift from a living creature.

My untrained eye cannot tell the difference between the real and the fake, just as I’m unable to distinguish between the quality of a good pearl and a truly exceptional one. I skipped the Mikimoto shop for that reason, though I fully intend to come back one day when I’m rich and famous.

The shop does have exquisite gifts for those who are capable of appreciating the science, care, and technique that goes into creating beautiful pearls.

For those who, like myself, are hesitant to spend money on something they can’t tell the difference on – or who are a budget – fear not. Genuine Japanese pearls can be purchased inexpensively less than five minutes away on the mainland. I was able to score a small pearl pendant for  ¥1600 ($10).

Ise Grand Shrine was founded approximately two thousand years ago. Princess Yamatohime-no-mikoto, the daughter of the Emperor, was responsible for finding a suitable location in Japan in which to enshrine the sun goddess Amaterasu. As the premier shrine in Japan, it receives over six million visitors a year.

It was a short train ride from Toba to Isuzugawa station. Outside the station, I watched as the last taxi disappeared and reluctantly boarded a packed bus for a 15 minute ride to the outer shrine.

Once the bus offloaded, I simply followed the large crowd under a massive Torii Gate, over a bridge, and through a forest. These were happy pilgrims – high energy, joyful, and taking lots of pictures. The ages ranged from young babies and toddlers to elderly being wheeled over the path on a multi-generational journey.

Ise Grand Shrine is located in Ise-Shima National Park. Whereas the most famous Christian places of worship – St. Peter’s Basilica (Rome), Notre Dame (Paris), St. James Cathedral (London) – are located in urban areas, I really appreciate how Japanese shrines are largely surrounded by nature. There tends to be a very clear line of demarkation between the religious and the commercial. As with Izumo Taisha, you must walk through a forest to get to the shrine. Perhaps it is psychological, but the sharp distinction in scenery really does seem to create an opportunity to pause and reflect.

And with the changing of the seasons and colorful autumnal leaves, the area was stunningly gorgeous.

The inner shrines are too sacred for guests, and the area is fenced off. Despite the fact that the average person never actually gets inside the shrine, there is something very special about the communal feel of waiting in line to say your prayers.

A sublime food crawl continued after visiting Ise Grand Shrine, with a jaunt to the streets at the base of the entrance to the woods. The old-fashioned architecture of the houses and shops on either side of the street are beautiful.

Although it was just past 3 p.m., the streets were absolutely bustling with hungry pilgrims eager to sample local delicacies. Matsusaka beef, from the outskirts of Mie prefecture, is considered to be one of the top three Wagyu beef brands. My eyes lit up, and my stomach leaped, at the chance to buy skewers of real Matsusaka beef for a bargain ¥1400. The meat was wonderfully tender and hot, with the luscious juices dripping in the paper. HEAVENLY.

I decided to forgo trying to take the bus back, and walked the 1.8 miles to the train station. I caught the Vista train back to Osaka just as the sun was setting.

It had been an utterly wonderful day.

Mie was such a joy to visit. Although it was a very special day, I regretted the visit was so short. I would love the chance to try a multi-day exploration of the prefecture.

As aforementioned, it takes intentionality and some planning to get to Mie. The two best places to depart from for a day trip are Nagoya and Osaka. Note: the JR Rail Pass is not accepted on the lines that service Mie. From Osaka, I took the Kintetsu Line for ¥3800 ($28.49) each way.

If you’re looking for safe and affordable places to stay, there are many options to choose from.

Those who come to Mie will immediately notice that the pace is far more relaxed. If you’re craving a break from the bustle of a big city, consider visiting this region for a welcome chance to experience a unique part of Japanese culture. How often can a Westerner lay claim to worshipping at the holiest shrine in Japan?

Beyond that, the Ama tradition is declining every year. It’s a way of life that I’m glad I got to briefly see, and one which I’d love to learn more about.

Here’s wishing you a safe and marvelous adventure!

One thought on “The Beautiful Ama Divers, Pearls and Treasures of Mie Prefecture”