The Sand Dunes and Hidden Delights of Tottori 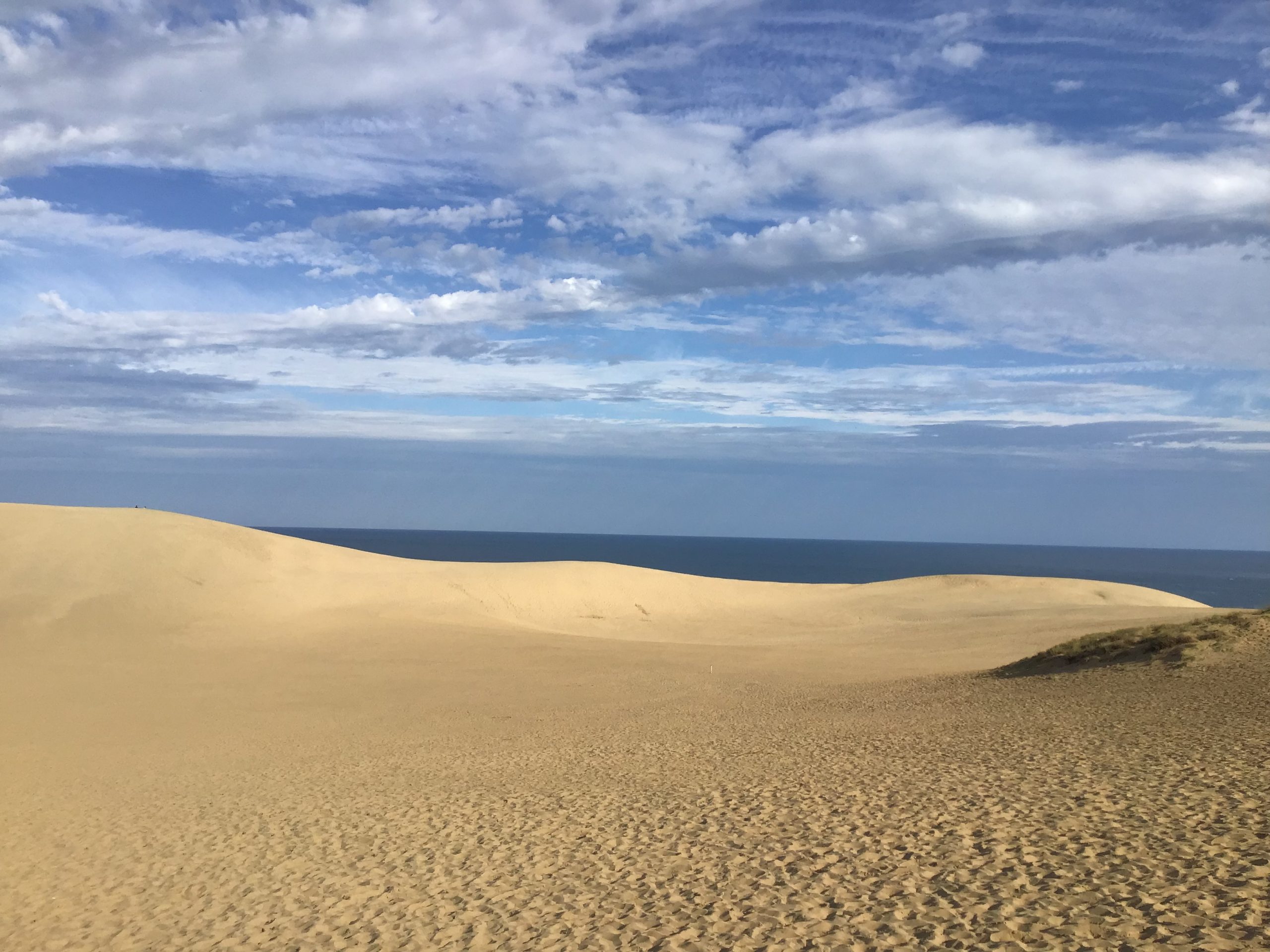 Hold on, you say? Japan has SAND DUNES?

One of the nicest things about being a U.S. Navy Sailor is that you get 30 days of ”leave” (vacation) every year. Sailors are normally authorized to store up to 60 days. After that, any leave that you don’t use before September 30 disappears.

With only seven days to burn my excess leave, I bought my train tickets and headed for Tottori.

I was eager to get started. Although it was late September, the weather was still warm and I wanted to get to the dunes before the sun was out in force.

The 20 minute taxi ride cost ¥2600 ($18.74). Important note: Tottori offers an amazing incentive and foreign tourists can rent a taxi for three hours for a mere ¥3000 ($20.72). I decided NOT to book the tourist taxi for this particular outing simply because I wasn’t certain how long I wanted to spend at the museum or dunes. (I thought I might want to spend a full day exploring the area.) For more information about the tourist taxi, please scroll to the bottom of the post.

It was startling how quickly the geography changed. One minute we were moving past fields of farms, and the next we were at the UNESCO Global Geopark.

My taxi dropped me off by a Visitors Center that hadn’t quite opened and a set of stairs leading neatly up a dune. I was amused – every other step was marked in English with cautions and rules. Among other things, visitors are forbidden from drawing in the sand or creating their own sand art.

Sorry, this is not the place to write your marriage proposal or love declaration!

I was not prepared for the sight at the top of the dune. My jaw dropped at the perfect wild beauty before me.

The golden-beige dunes were set against a sapphire colored ocean. Above it all was a beautiful sky and soft feathery clouds.

The Tottori sakyu (sand dunes) are a mile wide, and nine miles long.

Approximately 100,000 years ago, the dunes were created out of sediment the Sendaigawa River delivered from the Chugoku mountains.

The sand was deliciously soft. While that made climbing up the dunes a challenge that definitely sculpts the thighs and gets the heart pumping, going downhill was a real treat.

A wonderful perk to starting the day early was that I was one of a handful of people out. The downside was that everything except the dunes was still closed. After a happy hour exploring the area, I headed the short 600 meter walk to the Tottori Sand Museum and waited for it to open.

The Tottori Sand Museum has the distinction of being the world’s first permanent museum dedicated to sand art sculptures.

Every year international sculptors are invited to create art based on a central theme: ”Travel around the World in Sand“. At a time when travel was still limited, it gave me hope that an international group from 11 countries had come together to create something so magnificent.

Exhibitions in years past had featured Africa, the U.S., Russia, U.K., South America, and Nordic countries. The theme for 2022 was Egypt.

I was the first person in line at 8:56 a.m. At exactly 9 a.m. an employee politely took my temperature and welcomed me inside, where I purchased a ticket for ¥800 ($5.53). A woman apologized that there was no brochure in English and directed me to the 2nd floor exhibition area.

The display was extraordinary in its size, scale, ambition, and exacting detail. I have to marvel at how much care went into creating the mood. For example, festive Egyptian music gave the impression that you are in a bazaar, and every sculpture was optimally lit.

The 2nd floor allows the chance to appreciate the artists’ technique up close. For an overarching view, head to the 3rd floor.

There were also a few sand sculptures outdoors, carefully shielded from the elements by tarp. At the top of the hill is a ”bell of happiness”, which I struck with gusto.

A Sweet and Unique Treat

Given that Tottori is Japan’s top pear-producing region, it’s impossible to miss the devotion given to its pears. Almost every gift shop is guaranteed to sell cookies, pastries, or jellies to take home.

Outside of the Sand Art Museum gift shop, I was fascinated by a poster displaying soft cream treats with a unique Tottori spin.

There was soft cream with a fresh Tottori pear topping, and soft cream flavored with soy sauce, or fine-ground coffee. I wanted to try them all. And then I saw THE ONE.

After the museum, I returned to the sand dunes hoping for a camel ride.

I like camels, and have ridden them in United Arab Emirates, Jordan, Egypt, Morocco, and India. It never crossed my mind there were camels in Japan because I had not learned until recently that Japan had a desert.

I am so curious as to how the idea originated. One can almost picture Japanese officials surveying the landscape and saying, ”I’ve got a great idea with what we can do here…”

In addition to a bottle of hand sanitizer, there’s a camel ”pooper scooper” by each stand to ensure the sand remains clean. Japan is all about cleanliness.

(Those who ridden a camel before will attest you need good balance and that there’s a lot of pitching back and forth as the camel stands/gets back down.)

Mid-August to November happens to be prime pear-growing season.

Tottori’s “Pear Road” is less than a mile from the Sand Museum. A number of local farms allow visitors to pick their own fruit.

An elderly woman was selling pears out of her roadside shop. A pear orchard grew directly on the hill behind. I purchased two enormous pears for ¥500 ($3.45), and she invited me to a table inside her shop to eat them.

I was just about to sink my teeth in one. With an expression that was half-amused, half-alarmed, she took the pear from me and deftly, skillfully removed the seeds and peeled the skin.

She was chuckling as she spoke in Japanese I could not understand. I felt a little shy, and very confused.

The Japanese will eat every almost every part of a fish, head and tail included. And yet they will peel the fruit?

She handed me a plate of perfectly sliced nashi.

It was wonderfully juicy, with just the right amount of sweetness.

A Lovely Gift at the Visitor’s Center

Back at the Sand Dune visitor’s center I asked for help in getting a taxi to Hakuto Shrine. The woman at the front desk readily agreed and told me to wait in a lounge area.

“I make a present for you.”

She presented an exquisitely folded piece of origami with both hands.

I thanked her for the extraordinarily thoughtful gift. She knew I was going to Hakuto Shrine, and so she had made me a rabbit.

Having been to Izumo two months earlier to see what is arguably Japan’s holiest shrine, I was familiar with the legend of the white rabbit.

The white rabbit had gotten a little too clever in a challenge with sharks. After lining the sharks up, he used their backs to hop from an island across the water. After realizing they’d been tricked, the sharks tore up the rabbit. The god Ōkuninushi took pity on the rabbit and told the creature what action to take to restore its fur. In return, the grateful rabbit made a matchmaking prediction for the god.

Hence, the rabbit is associated with matchmaking and love.

Indeed, there’s a double row of bunny statues lining the bath to the shrine, and a huge heart-shaped structure adjacent to it.

After paying my respects and saying a prayer at Hakuto Shrine, I traced the designated rabbit-hopping route. The path took me up a hill of heavy woods to an overlook with a gorgeous view of the island.

The route makes for a lovely hike with lots of varied scenery. I can well imagine it’s a popular place for sweethearts.

As aforementioned, the tourist taxi costs a mere ¥3000 ($20.72) per car. Foreign tourists can book the special deal by phone or at the Tottori Tourist Information Center outside the train station.

In addition to courses on sand dunes and shrines, there are options based on interests, such as “Handicrafts and Arts” and ”Sweet Tooth”.

I took the tourist taxi on my second day in Tottori.

Since I had already been to the most popular places and it was raining, I opted for Course 9 – “Steam Locomotives at Wakasa Railway”.

I completed a registration form, a woman placed the call, and my driver, Okubo-san, arrived within minutes.

Most of the time, when you hear ”tourist” and ”taxi” in the same sentence, you think ”rip-off”. You remember a time and place when a taxi driver took you on an unnecessary route to pad the fare.

A tourist taxi here makes you feel like visiting royalty. The car was immaculate, with white lace covering the backseat.

I enjoyed seeing the rural side of Tottori and the old steam locomotives. I especially liked Fudoin Iwayado Temple, which was built in a cliff cave some 1200 years ago.

Okubo-san was such a classy and gracious gentleman. It was obvious how much he loved his town and the chance to show it off.

Bottom line – I TOTALLY loved it.

Getting to Tottori: It’s five hours by Shinkansen and SuperExpress from Tokyo. You can fly from Haneda for about the same cost and half the travel time…but then you’d miss out on the amazing scenery that comes with traveling by train.

As a small city, Tottori books up quickly. However, by traveling on a weekday, I was able to get a clean, comfortable single room near the station for under $50.

The dunes and Sand Museum are best in the morning, ideally on a weekday.

I’m sure good folks will note that I could have taken the tourist taxi to the desert and Hakuto Shrine for a fraction of the cost. Totally true. (I spent about twice as much, and still took a local train.) But I wanted to savor the experience, and I didn’t want to feel rushed or disrespect the taxi driver’s time.

That being said, there are many who will find a three hour course to the dunes a perfect match.

Safe and happy adventures to you!