Todaiji Temple and the Surprisingly Assertive Bowing Deer of Nara 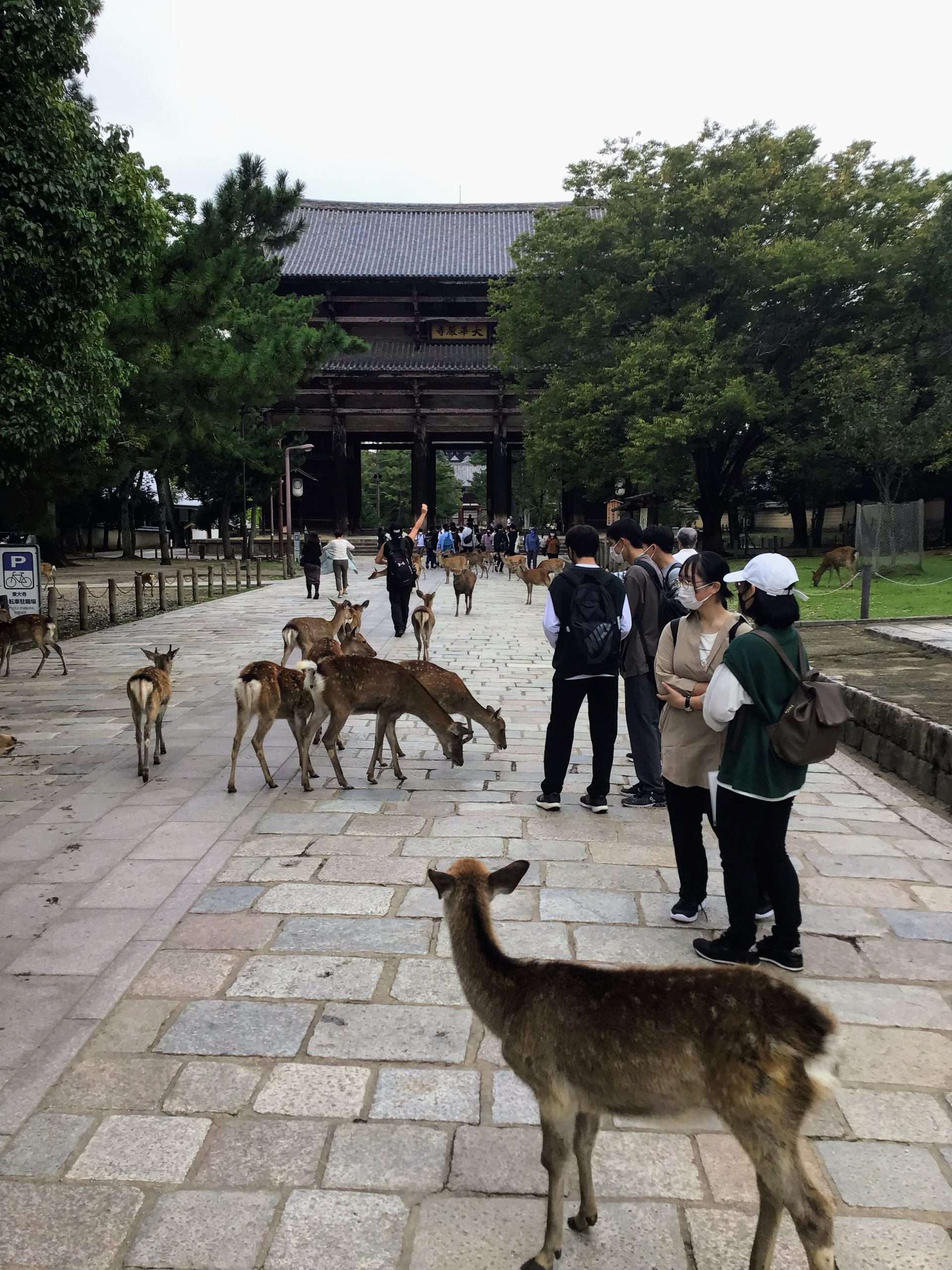 As I strolled the gorgeous Todaiji Temple grounds I marveled at the chance to see the bowing deer of Nara up close. They seemed entirely at ease there.

Why wouldn’t they be? In the Shinto faith, deer are viewed as messengers of the gods.

Regardless of whether they were at a Shinto shrine or a Buddhist temple, the deer roamed with the easy confidence of those who know they have a right to be there.

In ancient Nara killing a deer was a crime punishable by death. The traditional regard for deer continues into present day – Nara deer have been formally designated as a national natural treasure since 1957, and are protected by the Cultural Assets Preservation Law.

As a result of this protection, Nara’s wild deer population is currently estimated at approximately 1200.

Nara – An Ancient Capital of Japan

The streets were empty and quiet when I set off at 7:30 to explore.

I think Nara’s chief charm is how it balances its historical treasures with the truly unexpected. The temples and shrines are impressive on their own. Add in some bowing yet very assertive deer, and you’ve got some real excitement.

The street soon gave way to the forest, astoundingly beautiful shrines and temples, and lots and lots of deer.

I saw a deer observing a Japanese man praying at a shrine. After saying his prayers, the man bowed deeply. The deer who had been watching approached the man and immediately bowed its head.

It was utterly charming.

Although bowing is a critical part of Japanese culture that conveys humility and respect, I’m convinced the deer do it for a different reason.

They are phenomenal mimics. There’s an excellent chance that deer will greet you with a small and utterly charming bow. But after that gesture, be prepared to either immediately offer a shika senkei (specially formatted deer cracker) or hold out your empty hands and start running.

There are many different hypothesis as to why the deer bow, the prevailing thought being that it is a learned behavior.

Nara deer are unlike any I have ever seen. Unlike the deer in North America, they do not run from humans. There’s no trace of shyness or skittishness. Quite the opposite. In what is a stunning role reversal, the deer more often than not pursue humans they suspect are holding shika senkei.

Throughout the park there were bright yellow signs with warnings in Japanese and English that it was deer mating season. In addition, there was a poster promoting an “antler removal” ceremony. Every October, a special ceremony is held to surgically remove the antlers.

The antlers are removed for two key reasons: 1) to protect the trees and environment, 2) for the safety of humans.

The bulk of a deer’s diet comes from the forest and local parks.

However, there’s a special deer cracker known as shika senkei which are sold beginning at around 9 a.m. by designated vendors around the park. The crackers are made of rice bran and wheat flour. It is critical to note that shika senkei are the ONLY authorized food you can feed a deer.

For ¥200 ($1.38) per packet, the truly daring can hand-feed the animals. Because the crackers are so beloved by the deer, vendors have metal tongs and protective coverings that they use to keep the deer from accosting their cart.

Some of the deer appeared to favor the local shops just outside the forest. I found two outside of an ice-cream shop rubbing their heads against the glass door. On another occasion, I was perusing the merchandise outside a shop when a deer snuck up alongside and bit into the wrapping of a beautifully wrapped box of local cookies. The shop owner calmly removed the slobbered, indented, and now unsaleable box from the display with an air of resignation.

I can only imagine that locals have a love-hate relationship with the deer. Traffic jams and pilfering aside, the shop owners constantly have to sweep up and wash the streets. However, in a country with so many incredible temples and shrines, these deer offer a competitive advantage. It’s reached the point where the deer are so closely intertwined with the city’s identity that removing them would hurt tourism.

This is especially true given Nara’s proximity to Kyoto – a city with THE highest concentration of palaces and places of worship.

Although the deer are what distinguishes the experiences, the three most popular religious sites are well worth a visit on their own merits.

If you only have time for one temple in Nara, this is the undisputed one to visit.

Todaiji Temple was founded in 728. Despite its age, its Great Buddha Hall retains its title as of the world’s largest wooden buildings.

Because of its rich history, Todaiji Temple is a very popular place for school children field trips. An entry fee ticket is ¥600 ($4.15).

Todaiji is one of the few temples I’ve been to in Japan where you are allowed to take pictures. Inside the massive temple hall is the 15 meter tall statue of a seated bronze Buddha representing Vairocana.

Kōfuku-ji Temple, known as “The Temple that Generates Blessings”, was established at roughly the same time as the city.

Today, it is a head temple for the Hossō Sect of Buddhism. The five-storied pagoda is one of the tallest wooden pagodas in Japan, second only Kyoto’s Toji pagoda (180 feet).

The temple opens at 9 a.m., but the grounds are open 24/7 and make for a delightful early morning stroll.

The lovely Kasuga Taisha shrine is accessed via the Mt. Kasuga primeval forest. One of the reasons the woods is so exquisite is because there are over 175 varieties of trees. The celebration of nature is such an important part of the Shinto faith that the simple act of walking in the woods feels like a religious experience.

There are neatly designated paths marked for walkers and pilgrims with each side lined by stone lanterns. Many of the lanterns bear the image of the deer. It’s important note that travel outside of the marked paths is expressly forbidden – the woods are the deer’s home. The deer are free to come out of the forest; you can’t go in.

Is it any wonder the deer have such a superiority complex?

In addition to the stone lanterns, Kasuga Taisha is famous for the bronze lanterns donated by worshippers. There are literally hundreds of bronze lanterns strung outside the buildings.

Nara is a very popular place to visit from Kyoto. I chose to stop in Nara following some camel riding in the sand dunes of Tottori.

I was able to get a great “single” room by the train station that was clean and quiet for $45 a night.

Nara also has the advantage of being an incredibly “walkable” city. In fact, many of the key attractions are within an easy 25-30 minute stroll from the train station. Provided that you are in good health, walking may be more enjoyable than taking a bus.

Important notes: You might be a carnivore, hunter, or full-blown venison lover. However, while in Nara the deer should be treated with the utmost respect. If you choose to feed the deer, do not make any attempt to tease them. Simply dole out your crackers (ideally with your backside protected by something solid), hold out your empty hands to showcase you are out, and swiftly get out of there.

Feeding the deer is definitely *not* an activity I would suggest for small children. In fact, it would be downright dangerous to have a small child hold a deer cracker. Children might, however, very much enjoy seeing how well YOU handle feeding the deer. 😆

The children around me were grinning in amusement, and even the adults got a chuckle.

Should you choose to go, here’s wishing you a safe and AWESOME adventure!