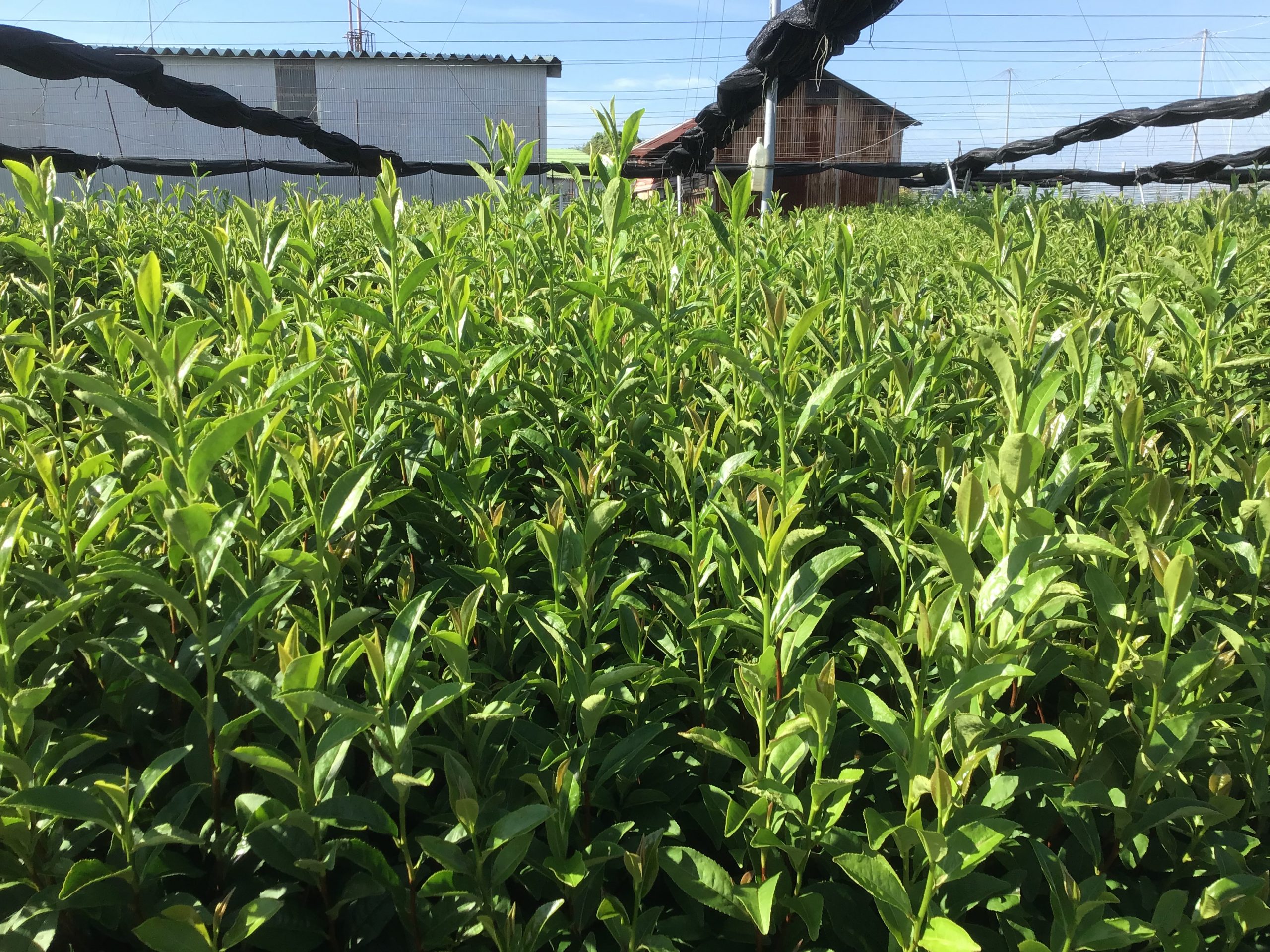 Many regions in Japan grow the country’s iconic green tea. However, Nishio, the capital of matcha tea, is the only city in Japan to specialize in Matcha production.

Over 90% of tea production in Nishio is dedicated to tencha, the building block for matcha tea.

The difference between green tea and matcha is that green tea (sencha) is steamed. With matcha, on the other hand, the entire (tencha) leaf – in powdered form – is consumed.

Both green tea and matcha are touted for their health benefits. Drinking either tea is said to strengthen the immune system, improve concentration, slow down the effects of aging, and be good for dental hygiene. (Tea leaves carry a high content of natural flourine. Who knew?)

I’d been wanting to tour tea fields for some time. Full disclosure: I ADORE matcha.

Kyoto is also known for matcha production, but while I love Kyoto, I wanted to visit a new city. Thus, I booked a tour in Nishio. I was intrigued when they wrote asking for my height so that I could wear a traditional tea picking costume. I responded I was 173 centimeters, just shy of 5’9”.

By Japanese standards, I am a giant.

To be certain I made the tour on time, I took a train from Yokosuka and spent overnight in Nagoya. Getting to Nishio from Nagoya involved two local trains, followed by a 30 minute walk to Aoi Seicha.

The first thing you realize in Nishio is that you are indeed in an agricultural region. I plugged Aoi Seicha’s address into Google Maps and followed guidance that took me alongside field after field of pristine tea plants. Yes, I looked like a total tourist. I could see amusement in the eyes of passing bicyclists as they listed to my phone belt out ”Turn right”.

I showed up for the 9 a.m. tour 45 minutes early. A shopkeeper saw me, and although I tried to convey I was more than happy to wait outside – in Japan on time is ON TIME – she nonetheless graciously invited me in a shop that was not yet officially open.

I was the only one on the morning English-speaking tour. At the second floor cafe, I was welcomed by four people. My guide, Kamiya-san, whose fluent English was the product of several years in Sydney, went over the itinerary. After a short video on tea production, there would be a costume fitting, a visit to the matcha tea fields, a tour of the factory, a chance to hand-grind matcha leaves and make my own cup of matcha, and the opportunity to try a range of Japanese teas.

After the video (which he translated live), I was handed a package containing multiple parts of the traditional tea picker’s attire. They must have seen the uncertainty on my face, because they reassuringly said they would help me dress.

It has been several decades since someone last dressed me. The fact that I was several inches taller than they caused us all to break out in giggles.

Hori-san helped me into a purple robe and fitted me with a red belt. The men had to get involved for the red sash that went over my shoulders and drew the sleeves in. A turquoise apron with the characters for “Nishio ocha (tea)” was tied around my waist, and turquoise sleeves went over my forearms, held in place by lasso ties over my middle fingers.

The final touch was a white head towel.

I felt as colorful as a butterfly and very happy. I was ready to pick leaves.

Kamiya-san explained there were 100 hectares of matcha fields. Nishio’s success with matcha production is the result of its mild climate, rich soil, and the fog moisture coming off nearby Yahagi River. Although the region is largely protected from snowy winters, tall fans stood ready in the field to guard against frost.

Over each row of plants hung rolled-up black protective covers that would prevent the leaves from becoming too bitter.

During production season in April and May, nearby schools come to learn about the process and assist with gathering leaves. Kamiya-San shared that he himself had worked in these fields as a student.

The new, bright green leaves are most prized. The hand-picked, “best of the best” leaves are reserved for teas that commemorate formal occasions. If a package or container is marked ”ceremonial grade”, you know it is very special indeed.

From the tea fields, Kamiya-san pulled off a long shoot and deftly demonstrated the proper technique for pulling off the leaves. He warned me that if I pulled at full speed I might get cuts on my index finger.

After the visit to the tea fields, we walked the short distance to the processing factory. As expected, the factory was spotless.

I learned a 60 kilogram stone chausu with oak handles creates the best matcha powder. It’s no easy task to hand crank the wheel, and at the industry standard of one rotation per second, you have to have stamina. I beamed with pride as the dried dark leaves magically transformed into super fine bright green powder.

Preparing and Enjoying the Tea

After the factory tour, we returned to the 2nd floor cafe, which now had several guests. I tried hard to avert my eyes from the decadent matcha parfaits, matcha cakes, and soft cream they were eating. The beautiful thing about matcha is that regardless of what product it goes into, you can point to it with virtue. There’s no need to feel guilty because it’s good for you.

A table had already been set up with all the necessary tools for the matcha preparation demonstration. There is definitely an art to holding the bamboo whisk and creating the matcha foam. I was instructed to whisk in the shape of an ’M’, and to have my departing stroke in the shape of hiragana character ”no”.

Since the process behind growing, harvesting, grinding, and preparing matcha is very specific, so too is the way in which it is consumed. I copied Kamiya-san as he rotated his cup and slurped his beverage. (Yes, in Japan it is considered polite to slurp – you are expressing your appreciation for the drink.)

A new tray was laid before me with five cups of tea to sample. From the top left and going clockwise, they were: houjicha, sencha with matcha, sweet matcha, matcha latte, and Japanese black tea. While each was delicious, my favorite was the sencha with matcha.

The purpose of a tea ceremony is at its heart an expression of hospitality, a chance for giver and receiver to bond. To savor the moment mindfully. To exchange ideas.

That’s what we did. We discussed our favorite scenes from ”Top Gun: Maverick”. We spoke of places we had been and places we dreamed of going. While Kamiya-san had lived in Sydney, Hori-san had lived 20 years in Southern France and traveled to over 90 countries.

This was a group who was immensely proud of what Nishio had to offer. After asking whether I liked unagi (eel), they said it was a Nishio specialty and invited me to join them for lunch at a local restaurant. I went and had a really lovely time.

Although it was within easy walking distance, Kamiya-san insisted on driving me back to Nishio station so I could catch an afternoon train back to Nagoya.

From start to finish, I had received nothing but kindness and first-rate hospitality.

It felt like a special day with friends, and it’s a place I’d like to go back to.

It takes some effort and planning to get to Nishio. It was so worth it.

Since I don’t drive, and wanted to be certain I’d make the tour start time, I stayed overnight at Nagoya. I caught an early morning train to Shin-Anjou, followed by a train to Sakuramachi Mae (an unmanned station), and an easy 30 minute walk.

There are an abundance of places you can go to experience a tea lesson or ceremony. If you are looking for just the tea lesson or ceremony, or – hey! You just want to eat/drink matcha – you might prefer the convenience of a larger city. Matsue is said to consume matcha at five times the national average, and their matcha confections are heavenly.

I booked the Nishio tour wanting a full experience. While it is possible to get great photos of the tea fields while biking or walking, the only legal way to enter the Nishio fields is on a tour. The cost for the tour was ¥12,000 ($86.00).

The matcha fields make for cute photos for ladies who want to showcase themselves dressed up in the gorgeous costume. Sorry gentlemen – this opportunity is only for the ladies.

Those who will find greatest value from a Nishio tour are die-hard matcha tea lovers who are fascinated by a cultural legacy in Japan: the art of the tea ceremony. Because it’s not just about the tea…it’s about the process.

Special note: if you like eel, then you will definitely want to make a special trip to Nishio, where eel is a regional specialty. And let me assure you…like the matcha, the eel is ah-mazing.