Why October is the Perfect Month to Visit Kawagoe 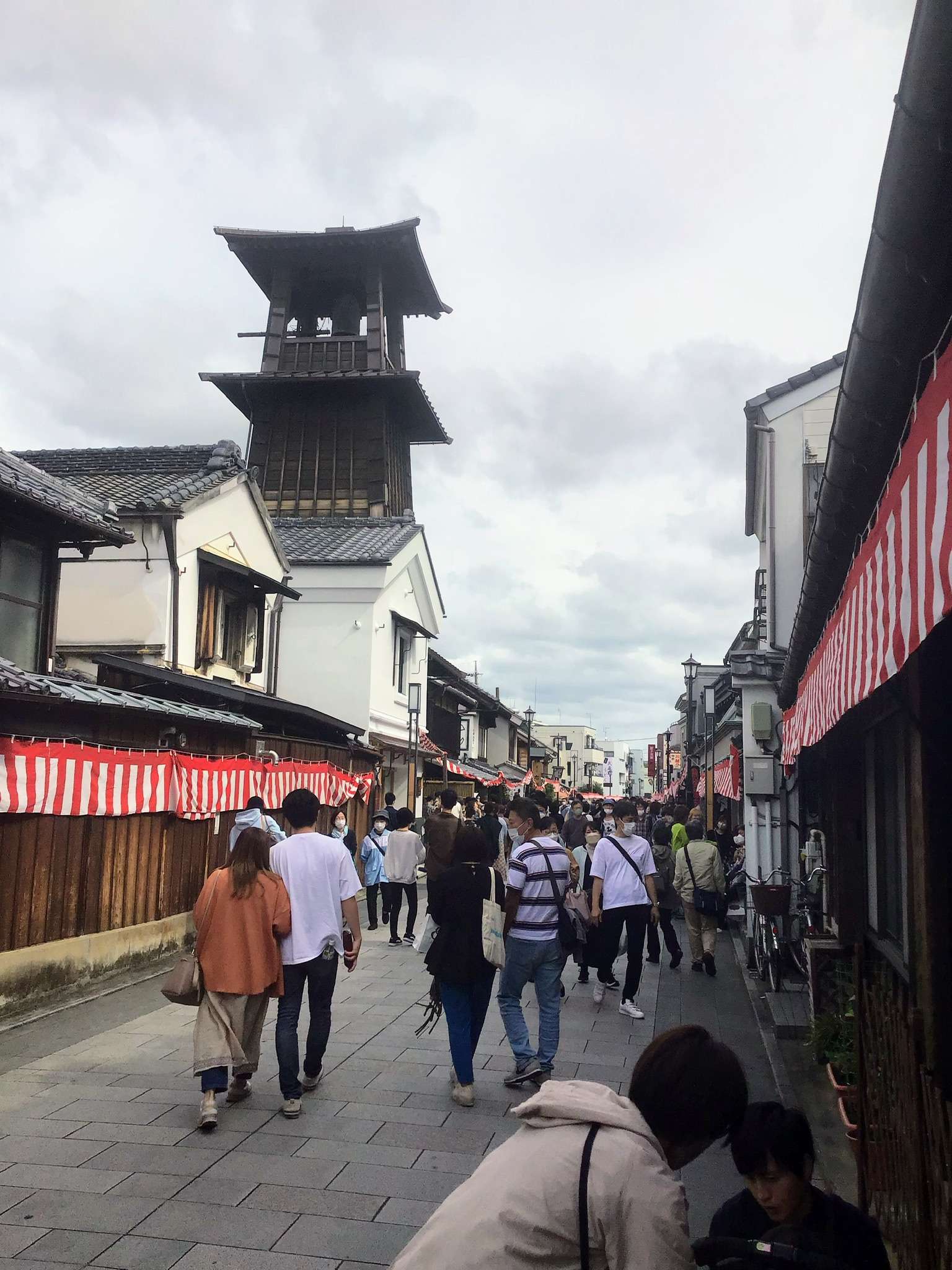 October is a phenomenal month to visit Kawagoe, known as ”Little Edo”. The temperatures have mellowed, autumn is in the air, and a sense of celebration abounds.

I know there are those who will argue that Kawagoe’s abundance of cherry trees make early April the best month to visit, but hear me out.

Kawagoe is less than an hour by local train from central Tokyo, making it perfect for a day trip. In addition for the stunning Edo-period (1603-1868) architecture, Kawagoe is known for unagi (eel), and sweet potatoes. And if you are there the third Saturday and Sunday in October, you have the chance to see the famous float and music festival.

Getting to the historical part of town requires a walk through a neat double row of shops and restaurants.

The Japanese tend to celebrate the change of seasons. Still, I was surprised by how many shops had Halloween decorations on display.

Perhaps I shouldn’t have been surprised. Although they love tradition, many Japanese also enjoy exploring different cultures. Case in point: posters on the Keikyu Line invited commuters to unleash their inner German at Yokohama’s Oktoberfest.

Still, Halloween seems the most unlikely of American traditions for Japanese to embrace. Take the phrase “trick or treat”. In Japan it is considered RUDE to knock on a someone’s door – especially if you don’t know them – and ask for a gift! It’s even more horrid to threaten a person by pranking them.

I’m baffled, but I find the Japanese take on Halloween to be unique and delightful. Displays typically include Jack-o-lanterns, themed stationary, stickers, and headbands. Notably absent are “sexy witch” costumes, anything violence-related, vampire fangs, cobwebs, or anything bleeding or ugly. This being Japan, it seemed an unspoken rule that everything be cute, clean, and child-friendly.

Having just observed several Halloween displays, I did a double take as I came across Kumano Shrine.

At first I mistook the lanterns leading up to the shrine as a Halloween theme. Upon closer inspection, I realized that the lanterns were not bats. They depicted Yatagarasu, a three-legged raven that represents heaven’s will or divine intervention.

And then I saw the group of people bending over a small area of water and realized I had inadvertently found a money-washing shrine. This was only the third money-washing shrine I’ve seen in Japan. Having proudly laundered my money at Iwami Ginza’s Rakanji Temple and Kamakura’s Zeniarai Benzaiten, I knew what to do.

I took a strainer and ladle from a stand and knelt by Takaraike Pond (Treasure Pond). After placing a note and several coins on the strainer, I poured cold water from the stream over the yen. According to tradition, those who spend their freshly cleaned money will find that the blessing multiplies and returns to them.

To the left was a small shrine with two serpent figures. I could not read the sign, but was curious when two young Japanese carefully studied the sign and then patted the snake statues on the head. I’m a mimic, and so I also tapped the snakes statues on the top of the head.

I’d find out later from the website that I touched the wrong part for the blessing I hoped to secure. Each part of the statue has a special significance.

Kumano Shrine has the unique distinction of being the only shrine I’ve been to that features two paths of exposed rocks and pebbles. I watched as a few Japanese removed their shoes and began walking carefully on the tiny stones.

An act of penance? A demonstration of discipline and toughness? No.

Since the “Kenkou Path” is said to stimulate blood circulation, they were taking care of their health with a little do-it-yourself acupressure.

Lest there be any question, walking on the pebbled surface HURTS.

The primary reason tourists flock to Kawagoe is for the incredible Edo-style architecture. Distinctive Kurazukuri-style fire-resistant warehouses were built following a great fire in 1893 that ravaged one-third of the old Kawagoe.

These days, the buildings operate as quaint shops that sell traditional art and local products.

The most celebrated landmark in this historic part of town is the Toki no Kane (Time Bell Tower), whose rich bell sound is ranked among the top “100 Sound Sceneries of Japan”. (As with many things in Japan, I am wildly curious to understand the criteria for selection for such an honor.)

Adding to the exuberant and festive atmosphere were the red and white banners that stretched from building to building, on and on for several blocks. I’d later learn the cause for the joyful candy-cane flags was an upcoming traditional Japanese festival with a 360+ year history that is held annually on the third weekend of every October.

During the two-day festival, enormous traditional floats from neighborhoods parade through the streets. The culmination are floats battling to see which can give the best hayashi (music and dance) performance.

Finally, the people themselves contributed to a joyful sense of celebration. Many shops in Kawagoe rent exquisite kimono for people to stroll the city in. (If you were wondering, it’s not considered cultural appropriation for Westerners to dress in Japanese attire. Quite the opposite; the Japanese will think you respectful.)

2 Most Famous Culinary Specialties of Kawagoe

The Japanese can queue like no other. Several restaurants specializing in unagi had lines that stretched around blocks. Japanese patience when it comes to waiting for food knows no bounds. If they travel to a destination wanting to eat at a particular shop, they will accept no substitute.

A fun if chaotic place to venture for inexpensive traditional treats is the delightfully named “Penny Candy Lane”. Be forewarned though – the Japanese sweet shops that line Meiji-era Candy Alley get crowded.

Kawagoe Hikawa Shrine was built more than 1500 years ago. With a reputation as a shrine for love, during the New Year thousands flock to the shrine to make their first prayers of the year.

As it so happens, I showed up literally one minute before a wedding ceremony. A shrine employee beseeched visitors to move to either side of a path. Seconds later, there was a wedding procession. A beautiful young bride in traditional pure white kimono and wataboshi (elaborate head cover) came down the path alongside a beaming groom.

Those of us lining the path and somehow bowed and extended our “omedeto gozaimasu” (congratulations!)

One of the unique features of this shrine is that there are thousands of tiny colorful fish with fortunes attached. For ¥300, the devout can use fishing poles to pull a fish out and read their fortune.

Fun fact: During the hot summer months, Kawagoe Hikawa Shrine is famous for its hundreds of wind chimes. In ancient times, during the sweltering summer days the sound of wind chimes was rumored to have a cooling effect on the body.

Departing the shrine, I headed for Kita-in, eager to see the 500 stone arhats.

Kita-in is a major Buddhist temple and features remnants of the former Edo Castle. I purchased a ¥400 ticket to see the interior. Photos are not allowed inside, and per custom visitors are requested to store their shoes in free lockers and tour in socks or bare feet.

The area has one of THE most stunning rock gardens I’ve ever seen. As I entered the temple area I heard the wonderful, rhythmic pounding of drums accompanied by the smell of incense. I had caught the tail end of a ceremony and watched as a priest gave his blessings.

The ticket also covers entry to the nearby area housing 500 Arhat statues.

Lest anyone actually be counting, and a sign outside notes that there are actually *538* statues. The arhats are disciples of Buddha and were carved between 1782 and 1825.

I love how deeply personalized each arhat is. The sculptors had a strong sense of playfulness and humor. While some looked serene and pious, others looked like they were listening to a good joke. Much to my amusement, one arhat was depicted picking his nose.

Legend has it that if you go there in the dark of night, feel for a warm statue, mark it, and return in the morning, you will discover the arhat that most closely resembles you. Given that these are ancient cultural treasures, I STRONGLY recommend no one put this theory to the test!

Kawagoe is approximately an hour by local train from Tokyo. It’s just under two hours from my house (near Yokosuka). One of the key reasons I had not been before is because I was intimidated by the 2-hour journey each way.

While you can score a seat on many local trains in smaller cities, that chance becomes miniscule if you board at a big city. On a journey from Yokosuka, Yokohama, or Tokyo there is an excellent chance that you will be standing for a portion of the trip.

A round-trip journey from Yokosuka cost ¥2200. From Tokyo Station, a round trip journey will go for ¥1360.

I am SO HAPPY I went. The day was so full of joy and discovery, and I fully intend to go back.

Here’s wishing you a safe and amazing adventure!