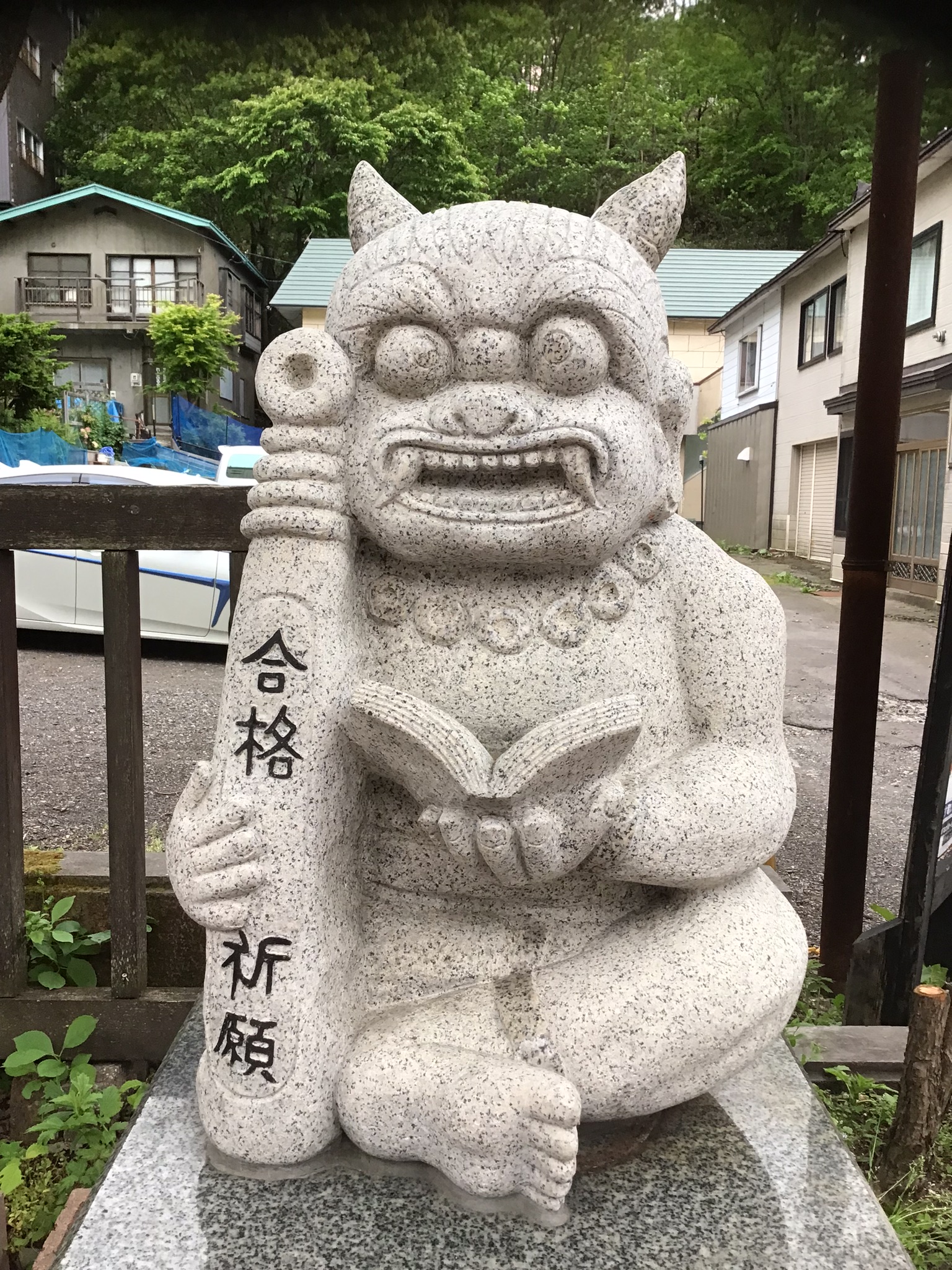 Go to hell. The phrase has lost its power through overuse. Unless, perhaps the phase “go to hell” was intended not as a threat, but as a travel recommendation.

Just a few hours earlier I had milked a Hokkaido dairy cow and made butter. I was in a mellow frame of mind after leaving the farm and boarding the train for Noboribetsu.

I should have taken the two demon statues directly outside the Noboribetsu station as a warning that the good times were indeed about to end. Instead, I was delighted. Clearly, the colorful demons were proof I was in the right place.

I had made it to Noboribetsu, destined for Jigokudani, aka ”Hell Valley”.

Generally, I would have preferred to walk or take a bus to the ryokan I had booked a night at. But since I would be leaving early the following day, it seemed foolish not to maximize time at Jigokudani. Therefore, I got in a taxi, was thrilled when the driver understood my poor Japanese, and off we went.

The ryokan, a traditional Japanese inn, was lovely, and I was in awe over the graciousness of the welcome. The tatami mat-covered room was bathed in natural sunlight, and I was tempted to rest a bit. This was countered by the realization that I had perhaps three hours of sunlight left. With that powerful incentive, I left the ryokan.

Thermal activity in Jugokudani was what made the town’s reputation as a premier onsen destination possible, sending forth over 10,000 tons of water said to contain medicinal properties. This water was what drove local business.

The ryokan’s proximity was ideal; less than a fifteen minute walk to Shikotsu-Toya National Park. There were an abundance of demon statues enroute, two somewhat hilariously guarding a shrine. I wonder whether my reaction to them is the one that the sculptures intended: the demon statues are ADORABLE.

The proper name for the demons is ”Yukijin”, and they were initially believed to be evil. Over time, the legacy of the Yukijin evolved, and they were now credited with fighting off bad spirits and protecting the medicinal baths.

In many ways the park area had the typical benchmarks one might expect of a hell. The slightly headache-inducing smell of sulfur? Check. Volcanic activity? Check. Super-heated steam swirling out of the earth? Check.

It is fascinating how different cultures envision heaven and hell. Seeing such wondrous beauty in a place called ”hell”, seeing such cute Yukijin, who wouldn’t want to stay?

There are multiple trails for hikers to explore the valley. I resolved to complete a few of the circuits before heading back to the ryokan for dinner.

In addition to being famous for its onsen and natural hot springs, this area was well-known for its hiking and abundance of bears.

A quick aside on bears in Japan: on a short hiking trip in Nikko, I had observed many Japanese hikers wearing strings of tiny bells. I had been curious as to whether the bells were for a religious or ceremonial reason. It turns out neither hypothesis was correct – I eventually came across a large stationary bell to the side of the trail. The sign requested hikers strike the bell to alert the bears in the region to their presence. After reading the sign, I had rung that bell like Quasimodo.

There were very few people out that afternoon. I was both thrilled and slightly nervous that there should be so few hikers on the trails. As the ascent was rigorous and there was no one in sight I removed my face mask. I was grateful that the trails were so well marked, and amused by the demon-hosted signs providing trivia challenges along the route. But in the event I’m ever tested outside the pearly gates about the depth of crater lake Oyunuma, I’ll give the right answer.

No, I won’t share it – that would be cheating!

After completing a circuit, I picked up a trail for the famous Oyunuma River natural footbath.

The pictures I had seen online showed dozens of tired hiker resting their feet in the stream. At present, there were precisely two hikers – a young couple. I was relieved. Had I been by myself I would have questioned whether I had indeed found the right stream. Since both of them were alert, and neither was screaming in agony, the water must be safe to enter.

I removed my shoes and socks and happily slid my legs in. The water temperature was delightfully warm. Unfortunately, the rapidly setting sun was a reminder to start heading back.

Back at the ryokan, I freshened up and changed into a yukata. Although I tend to veer on the side of budget travel, ryokans are worth staying at for the hospitality and food alone. For dinner, they led me to a separate area, with an exquisitely set table.

Tremendous care goes into every detail of a dinner, with dozens of tiny plates bearing delectable, ultra-fresh food. Dinner at the ryokan was a glorious way to end what had been a spectacular day.

In the morning I took a quick, early morning soak in the onsen to fully appreciate the power of the water.

For a westerner, bathing naked with strangers – even when they are of the same gender – can be intimidating. I had thought that by choosing to go down at 6:30 a.m. that there would be few people. Instead, both the indoor and outdoor baths had early morning bathers. We wished each other a polite ”Ohayo Gozaimasu”, and then otherwise avoided making eye contact.

I do find onsen water super relaxing. It is always hard to get out and try to do anything productive after a good soak.

After packing my bags and thanking the manager for a wonderful stay, I walked down the street to bid farewell to the adorable demons and to read posters promoting the annual “Hell Valley Demon Festival”. I felt momentary sadness I would not be there to see the festival in August, with its taiko drums, performers, parades, and a fireworks display that would mimic a night volcano eruption.

I was leaving Noboribetsu and hell…but I vow to come back one day!